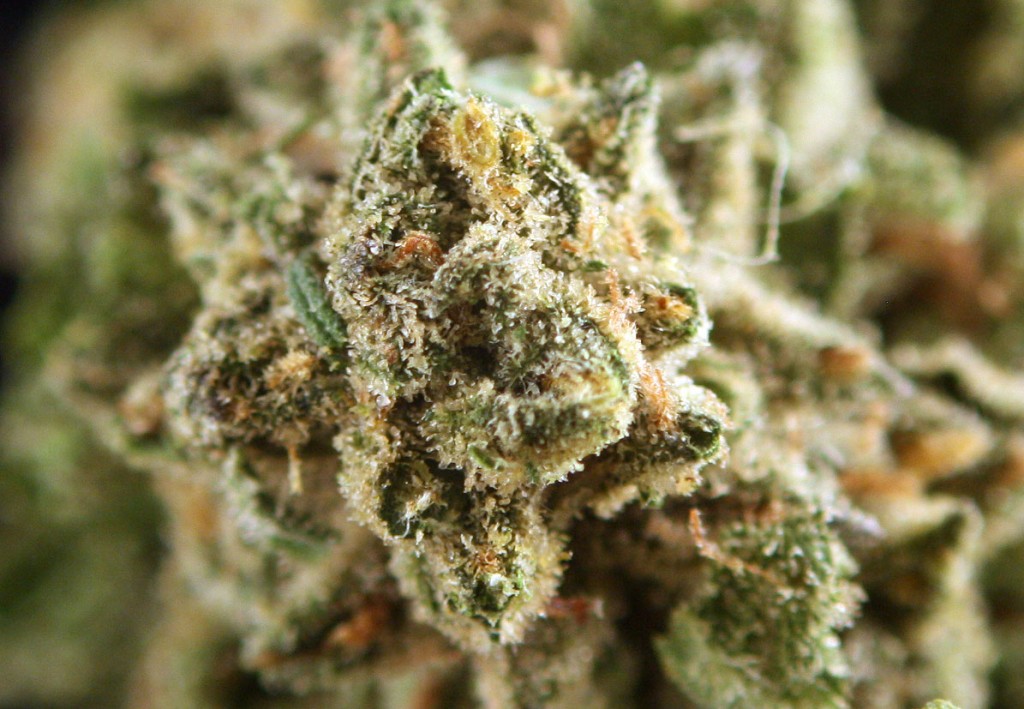 Genetics: I couldn’t really find much of anything on this strain. The farm said they got it as a clone and grew it out. It looked fantastic so here it is.

Possibly the OG Phantom X Cherry Pie cross as it does exhibit some of those characteristics, but without comparing terpene profiles, who really knows. What I do know is this. It’s some good ass weed.

Appearance and Feel: Tall rich trichome growth spattered over a mix of light and dark greens. Not as great of a calyx to leaf ratio as some other strains I’ve reviewed, but I think when everything is this frosty, it’s almost better to have them.

Of course that also depends on the taste, and the taster. It’s going to give your bong loads a little bit more of a kick, but if you are twisting spliffs, the little extra leaf content isn’t going to make that much difference.

Smell: Right out of the jar I’m getting a nice spice caryophyllene smell. I’m very familiar with this terpene, as it’s one of my favorites, and supposedly the one police dogs are trained to hit on. It’s what gives White Widow it’s spice smell, and is very abundant in cloves.

And apparently this Phantom Cherry Pie has a bit in there. There’s of course that unmistakable cherry smell ever present in the background, accentuating the spice. Very nice.

Flavor: Damn, this is some pretty tasty herb. It’s been awhile since I’ve tasted weed that tasted like cherries. I mean the legal high soda in Rainier Cherry flavor was tasty, but I wasn’t smoking it, and it was cherry flavored.

This is weed that actually tastes like cherries. Of course that spice is still there, and the bong rips kick you right in the face with both that spice leafy kick and a nice heady high change in perspective.

High: Speaking of high—this is some spacey herb for sure. At just over 20% all our new smoker stoner friends should take this one hit at a time.

The main reason I didn’t give this one an 8 like it’s berry laden Blue Magoo counterpart, is the taste. It could have been trimmed a little better in my opinion, and the extra leaf content definitely comes through in the taste.

What it lacks in taste it makes up for in smell and high. Definitely a strain I would keep in the Herb Boxx for when friends come over to smoke. It’s novel to have a strain in your box that smells like cherries. I mean after all, she’s my cherry pie, and cherry pie is stuff stoners like.