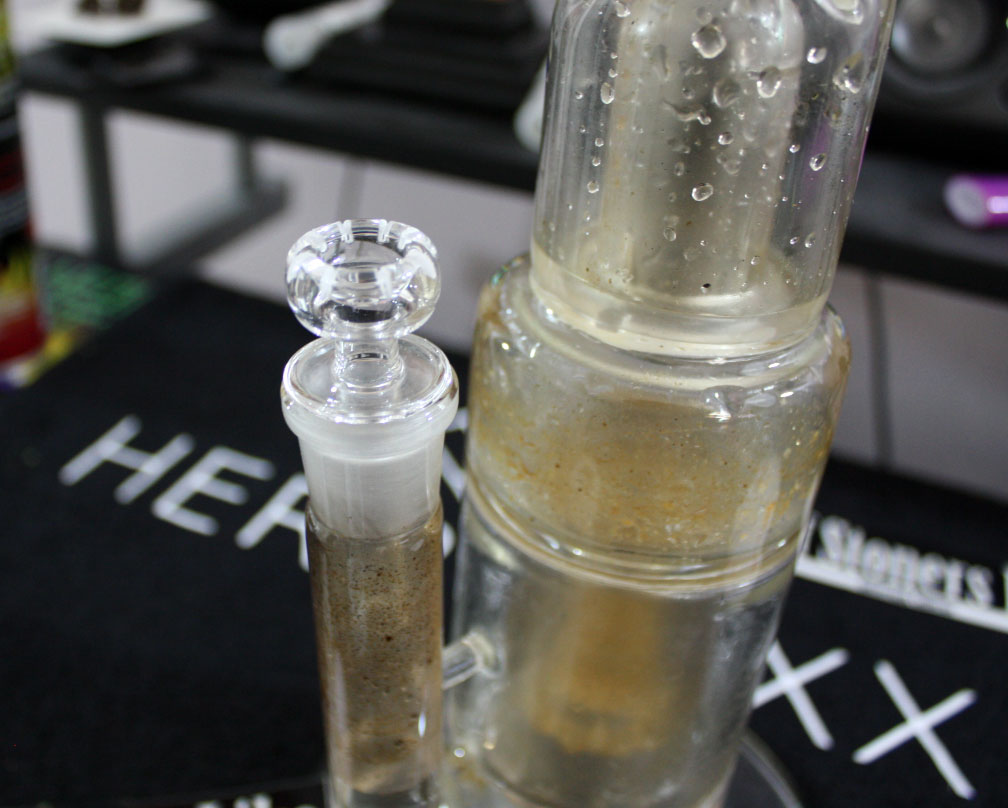 I haven’t had very good luck with anything other than titanium lasting for a dab nail. The ceramic ones break, and up until now, all the glass / quartz / whatever is in those cheap see through nails have broken on me. I’m hoping this will be different. I present to you, the QuartzCastle.

The QuartzCastle is designed by Chris Schuler in Olympia Washington. Quartz is a common crystal found in the earth, and because of it’s small COE, you can supposedly heat it up and toss it in water, and it won’t break. If it does break, it wasn’t pure quartz, and the impurities couldn’t handle the stress.

As you can see in the video I didn’t even bother to season it. It’s not for lack of material, I just don’t really care at this point. These dabs are so terped up it’s like all four seasons, in one immaculate clean clear dabby road bong rip.

I would like to have an 18 mm male adapter, instead of letting it just sit and twirl around like it does. It doesn’t quite feel like it will fall out of there, but I can see it maybe becoming an issue with certain friends. Mainly the ones who get drunk and clumsy. Then again, people who are drunk and clumsy probably shouldn’t be messing around with a torch and a piece of glass.

It’s really nice if you have access to extract that looks like this. It burns completely clean, not leaving behind any residue to get your nail all gross and charred looking. I always frown a little on the inside when a friend hands me a hot dab nail that’s still smoking out whatever the last person wasn’t able to finish. I’ll usually just torch it all out at that point, scrape and start over. I’ll keep using this material only for the Quartz Castle, and next month we’ll compare and see how it looks. The ceramic one that broke is looking pretty haggard, as is the new titanium nail. That’s what happens when you give hippies free reign to smoke whatever dabs and erls they want out of it.

On a side note, some of you should really start purging your BHO better. When I go to take a hit out of my wax pen, and have to let it purge for ten minutes before I can get a hit of something other than butane, that’s no bueno. Not only will that give you headaches after a while, but it’s just not good stuff. You want to make the good shit right? Well then make sure your shit is purged.

Anyway, my first thoughts on the Quartz Castle are great. I love it, and not just because it’s new and shiny. You don’t have to heat this up near as long as you would a titanium or ceramic nail, and I feel like it’s a better taste. How do you know if your titanium is actually titanium? Unless it starts burning a weird color or giving off some sort of fumes, you can’t. How do you know your quartz nail is pure? Well, heat it up and toss it in some water. If it cracks from the torch or from the water, then it just wasn’t meant to be, and the quartz had some impurities that didn’t share its passion for a COE of 1.

Get your Quartz Castle concentrate nail down at Growers Outlet, or pick them up online if you aren’t a Washington local. What’s your favorite nail? Also, do you have any questions for our resident extract scientist Dabby? We’re starting to collect the next round of questions so if there was anything you wanted to know, or if you think you can stump our dastardly dab dominator with some sort of sciencey mumbo jumbo, drop a comment or write in.