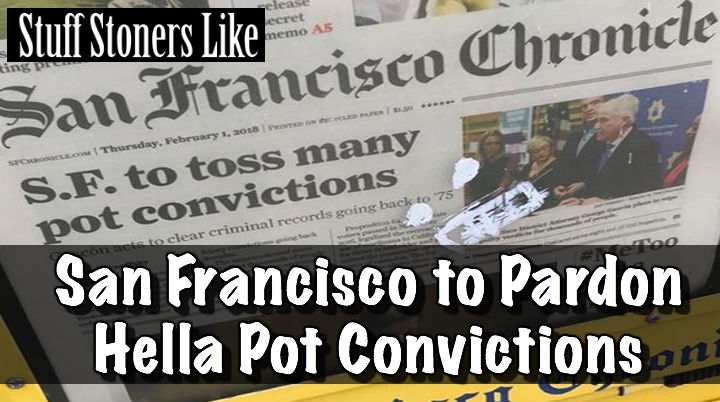 We here at Stuff Stoners Like didn’t vote to legalizing weed in California so some rich assholes can use weed to get even more rich. We voted to legalize the herb to put an end to people being busted because of a plant. So we’re stoked to hear that San Francisco District Attorney George Gasco, is trying to right severe wrongs from the past by enforcing provisions approved by California voters when they legalized herb in November 2016. Good news to those currently incarcerated for cannabis related crimes.

The DA stated , in a news conference yesterday, “San Francisco will immediately dismiss all herb misdemeanor convictions dating back to 1975 and will wipe arrest records clean for anyone who faced such charges. The city also plans to review all herb related felonies recorded during the same time period and, in appropriate cases, re-sentence them to misdemeanor offenses.”

Gascon added, “We want to address the wrongs that were caused by the failures of the war on drugs for many years in this country and begin to fix some of the harm that was done not only to the entire nation but specifically to communities of color.”

Supervisor Malia Cohen added, “There are thousands of cases that are going to be dismissed at no cost.”

When California voted to approve prop 215 and legalize the herb they also voted for provisional language giving those convicted of herb related offenses a second chance. The new law allows those with misdemeanor marijuana records to expunge their records and gives those with felony convictions the opportunity to have them reduced, pending a review.

Gascon estimates that just more than 3,000 misdemeanors will be automatically dismissed. Nearly 5,000 felonies will be reviewed and, if appropriate, re-sentenced to misdemeanors. Prosecutors will have the power not to support a reduction if the cannabis crime is associated with another major felony, like murder or rape. Old convictions will be reclassified under the law as it reads now. For example, if someone had been convicted of possessing an ounce or less of marijuana, that conviction would be tossed out because that is now legal under California law.

However, the wrongly convicted individual will still have to petition the court for review in order to expunge their records. To date, 4,500 wrongly convicted cannabis users have petitioned the court for review since November 2016. Some lawyers and others in the know suggest the change to the law has not been well publicized. Plus, the required petition makes it difficult for low-income state residents to have their records changed.

The Drug Policy Alliance said there have been 500,000 arrests for herb offenses in California in the past 10 years, and it estimates that up to a million people have reviewable convictions on their records.

San Francisco DA George Gascon and Supervisor Malia Cohen have more work to do in order to seriously right the wrongs of the past and gives those convicted of crimes for using herb a second chance. The DA’s declaration is monumental for those incarcerated for using or selling the herb, but what about those before 1975? And what about those with low or no income who do not have the resources to petition the court? Focus is needed on the communities of color if the goal is to “fix some of the harm” committed against these communities.

One Response to “San Francisco to Pardon Hella Pot Convictions”