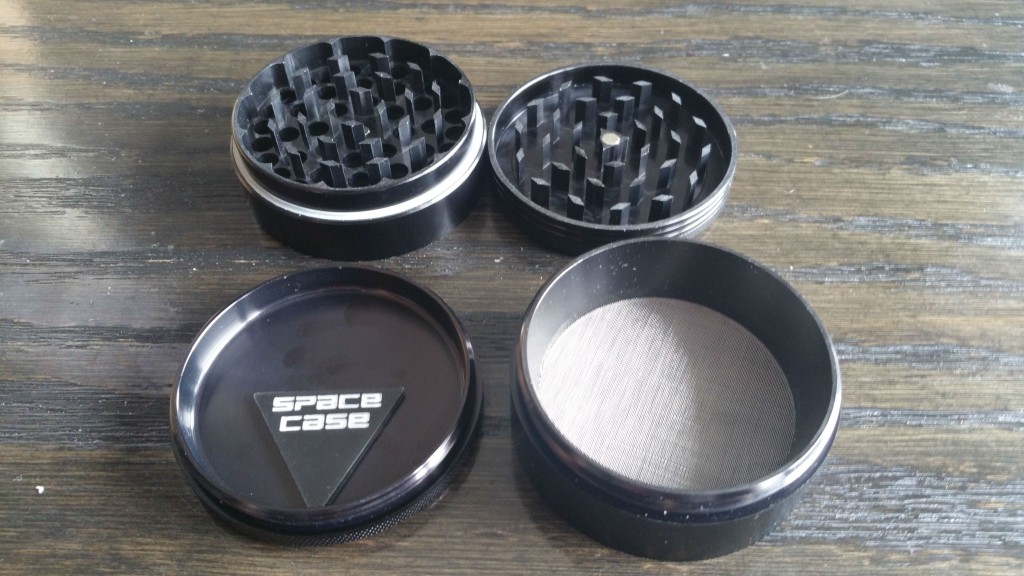 Review by: Lorenzo DaBlunt
After years of suffering with my shitty little two piece plastic abomination that I foolishly called a grinder I finally decided to take the plunge into grown ass man territory and purchase a proper metal grinder. A brief, but furious, Google search turned up a clear front runner as far as titanium grinders go in the Space Case Grinder

. I settled on the medium sized 4 piece grinder from SpaceGrinders.com considering I rarely have need to grind more than a couple grams of herb at a time. When the grinder arrived in the mail the first thing I noticed was how easily the action of actually unscrewing the main compartment and bottom pollen catcher was. After fiddling with my new toy (and taking some necessary photos) I immediately put the thing to work.

The size of the grinder is perfect, not so big that you can’t easily fit it in one hand, but still large enough to hold a respectable amount of herb in the middle compartment. The holes going from the top grinding compartment to the middle herb storage compartment were large enough to not get clogged easily but also small enough that large chunks of buds or stems would not be able to make their way through to mingle with your finely ground herb. The titanium teeth and construction of the grinder feel sturdy enough that I’m almost tempted to try grinding various items throughout my house, but despite my confidence in the Space Case’s resilience there’s no way in hell I’m going to risk losing my newest treasure to an endeavor as foolhardy as attempting to grind a fistful of pennies. Flower grinds just fine though. The grinder also features a lid with a magnetic seal, making traveling with the grinder a much less worrisome affair with no concern of losing any product due to the lid coming loose in your pocket or in the trunk of your car.

One of my favorite discoveries about this particular grinder is after only putting four or five grams through it a surprisingly large amount of kief has accumulated. I’ve used grinders in the past that seem to collect very little pollen regardless of how much you put through the thing, so this was a nice addition to an already desirable product. Although I haven’t had a need to clean the little guy yet I can already tell that it will be relatively painless, the metal is coated in a non-stick coating and even a once over with a dry cue tip should rid it of any leftover residue, if any residue does happen to remain behind dipping the cue tip in alcohol should be just the ticket. Overall I’m extremely happy with the Space Case Grinder

and would recommend it to anyone looking for a small and reliable four piece that is guaranteed to last.