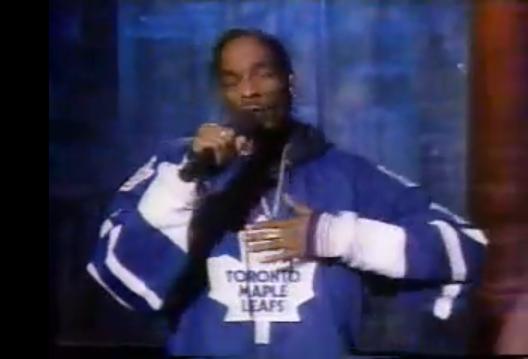 If there’s one thing the makers of STUFF STONERS LIKE have in common with Snoop Dogg…it’s a LOVE of HOCKEY. Okay, well…maybe there’s a few other commonalities, but that’s besides this point…which is…STONERS obviously LIKE Snoop Dogg, we don’t even have to explain that shit, right? So…since Snoop Dogg likes hockey and stoners like Snoop Dogg shouldn’t hockey be STONERS LIKE by association?

Last year Snoop Dogg got stoned in front of Nardwuar, the Canuck in Vancouver Canada, he did smoke out the cameraman, however and talked a bit about this subject. In between puffin’ a blunt he microwaved for 11 seconds…he filled Nardwuar all in on his love of Hockey.

“Snoop Dogg is an international individual who loves people, and people love Snoop Dogg for who he is, “ Snoop said. “I can connect with any world or any realm of people, and hockey is a great sport, and I fell in love with it and once I fell in love with it, I started to get more into it, so whenever they call on me to do things, like interviews on Hockey Night, why not?”

In between blunt tokes he tells Narwuar, in the video below, that he was the first rapper to rock hockey jerseys in music videos, on stage, an’ erywhere else. Seriously…even if you don’t give a shit about listening to Snoop talk about hockey…you are gonna wanna see the smile on his face after he microwaves that bunt, man. Trust us.

Who remembers that legendary moment when Snoop wore that Leafs jersey for like one of his debut national TV appearance on The Arsenio Hall Show, and on Soul Train all back in 1993? Well, if you’re memory is that good, son, you pro’lly need to smoke more weed. Anyhow, Nardwuar got Snoop to explain how his love affair with weed relates to the Maple Leafs and the Canadian flag.

“Because the Maple Leaf reminds me of a chronic leaf and I was representing that, you know what I’m saying?” Snoop explained. “I didn’t know the Canada flag was so close to the chronic leaf; I just liked the way it looked, so I was representin’ and it was blue.” You’ve seen Monday Night Football, right? Well, in Canada, they call it Hockey Night in Canada. Check out why should dig hockey.