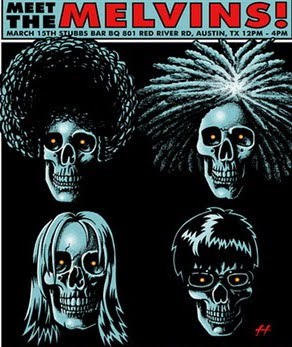 Kurt Cobain and the Melvins | Stories from the STUFF STONERS LIKE Vault
If it weren’t for the Melvins Kurt Cobain still might be alive. Winger and the rest of the hairy glam bands might still be sheik. And the grunge rock revolution might never have been fought.

The Melvins, originally from Aberdeen, Washington are perhaps one of rock’s most essentially important and relatively obscure bands of the past decade and a half. Maybe two. In ’94 they released an album called STONER WITCH (making them forever STUFF STONERS LIKE). It was the Melvin’s afro-headed guitarist/singer/originator King Buzz Osborne who introduced the young Kurt Cobain to punk rock, taught him his first (and only) few chords, and enabled him to crack under the pressure of exposing grunge to the masses. It was King Buzzo and his Melvins too who sparked the initial flame of what would be considered the cool rock revolution of the 90s—GRUNGE. But right before flannel clad rockers put the sleepy, state of Washington—suicide capital of the nation—on the music map the Melvins relocated to the San Francisco Bay Area.

“Washington sucks man, that’s why we got the fuck out in the 8O’s! We’re a California band now, man,” says, Osborne with a coy smile and a twinkle in his eye. “I started playing guitar relatively late in the game. l was 18 or 19. Then a couple of years later I started playing with Dale (‘spedo-wearin’) Crover. We’ve been a band now for 15 years.”

“There weren’t too many musicians up there at that time” says, Crover, “we pretty much knew everyone up there who had a guitar, so we left.”

So the Melvins left too early and missed the grunge rock revolution you say? “Missed it,” shouts Crover, “we started it!”

“Name one band up there that was any good through all of that…just one,” quips Osborne. “What? Pearl in Chains, Soundgarbage? We don’t like any of that crap. We don’t get all the notoriety as all those other bands, but that’s because they’ve sold millions of records. Our music is much less commercial. I’m not trying to write songs like that. I’m not up there having to sing ‘Black Hole Sun‘ every fucking night. Nobody in our band is putting shot guns to their heads. Those guys are all really rich and their bands break up or they die, but we’re still going and we’re really happy about it. Kurt Cobain was so happy he had to blow his fucking head off! Which way would you rather have it?”

But don’t think Osborne is bitter or feel that he and the Melvins haven’t had their share of the rock and roll pie. They’ve been handed way much more. It was Atlantic Records who heard all about the huge, money-making, flannel epidemic of the early 90’s and they just had to sign a true grunge act. They wanted so desperately to cash in on the cool new alternative discord that they eagerly handed the Melvins a huge cash advance.

“At the time they signed us all these grunge bands were getting signed. Nivana was huge,” says Crover, “so we slipped in the cracks. We walked away with four to five hundred-thousand dollars. It was like getting a loan from the band and not having to pay it back!”

For you see, the Melvins don’t sell out, they hand no intentions of producing another Ten or Badmotorfinger. They don’t write songs for the record buying public, they write songs for themselves. They handed Atlantic Records an album called “Stag”–one that the band liked, the fans loved, and Atlantic Records hated. “It was like taking candy from a baby,” laughs Crover.