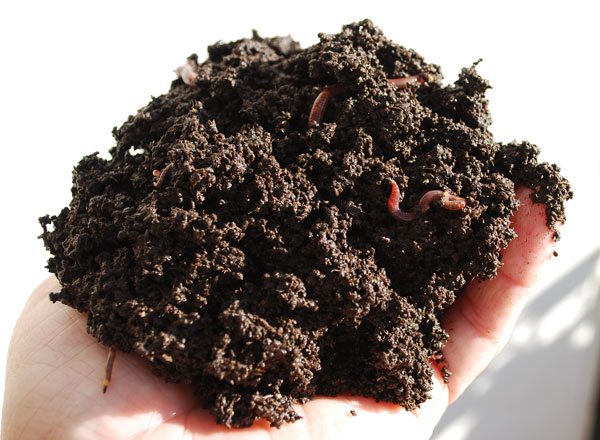 Question: I have a huge bag of worm castings

and want to know what’s the best way to give them to my plants. They are just about ready to flower. Should I top dress with it? Brew a tea? Can I dissolve it in water and make a foliar tea?

Jay Kitchen and Uncle Tweezy: Don’t make a nutrient tea from worm castings and use it on your marijuana plants if they have flowers—you don’t want your pot to taste like worm poop. If you’ve transplanted already then you have fresh soil so you don’t want to throw off the balance of the soil too much by adding worm castings right now. But you can add a layer of worm castings during week two or week three of flowering. That’s about the latest we would do it. Because you’ve got to remember that worm castings are time released. So they’re going to take some time before they break down in your soil. It usually takes a week. When you grow in soil the additions you give to your plants usually don’t affect them until about a week later because the soil buffers everything. Worm castings are a great trace element, but you can only use them through week two and that’s really it.

If your flowers are not like little cotton balls, like they’re still in transition and starting to stretch then making a nutrient tea with the worm castings and using it on them isn’t a bad idea, but once they start cotton balling it’s time to stop. You have your own worm castings so you can use that. If you’re going to make that tea you just need a teaspoon to a gallon. You ain’t got to put a lot—less is more. Remember it’s a time release trace element nutrient as well. Use a nice fresh bottle of worm water, let the castings settle for a day or two then put it all in your spray bottle and foliar feed your plants a couple of times.

For those of you who don’t have a bag of castings there’s a product out that you can called Vierra’s worm castings. That shit looks like lemon aid it’s so clear. They ferment it at real cold temperatures. Remember you can hit your plants with worm castings in week two but after that you should just let it ride—no spraying after week two once they’re in flowering.