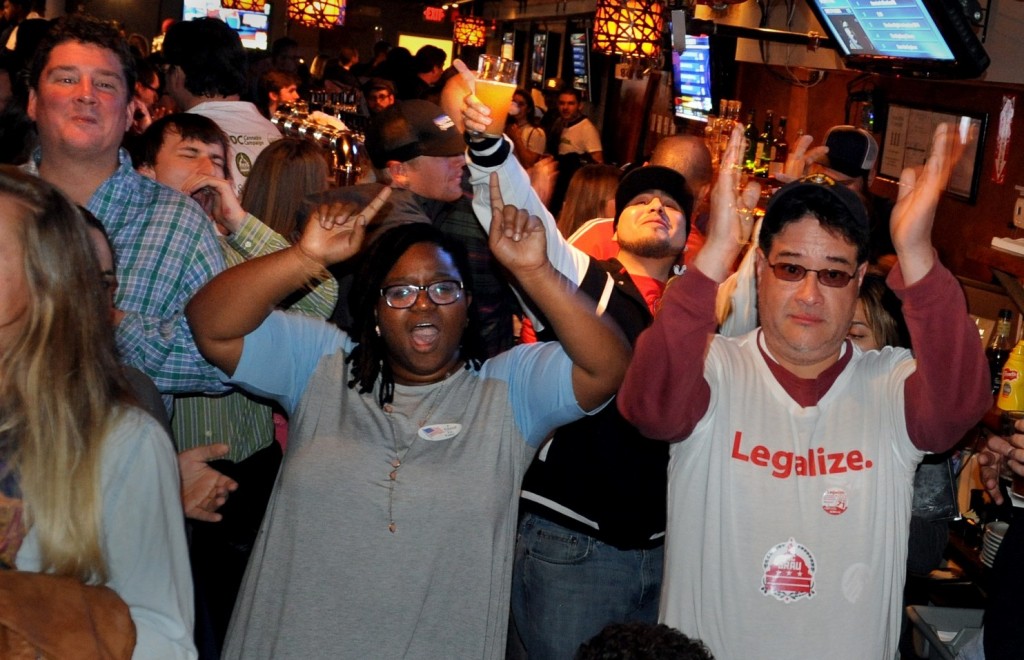 Marijuana is Legal to Grow and Possess in Nation’s Capital

WASHINGTON, DC—At 12:01a.m. Thursday, Initiative 71, a marijuana legalization ballot initiative approved by 70 percent of District residents, will complete the Congressional review period and become law. Initiative 71 legalizes the possession of two ounces of marijuana for adults over the age of 21, and allows them to grow up to six plants in their home, three of which can be mature at any time.

“This is a significant milestone in the movement for racial justice, civil liberties, and drug policy reform,” said Dr. Malik Burnett, D.C. policy manager at the Drug Policy Alliance. “The racially-biased enforcement of marijuana laws in the nation’s capital is officially a relic of history.”

The victory in D.C. is all the more remarkable because of the fact that Initiative 71 had to undergo a Congressional review lasting 30 legislative days. During this period, which began on January 13, both the House and the Senate had the opportunity to hold a vote to block the legalization law. Neither chamber chose to do so.

“There is simply no organized, significant group of members of Congress willing to waste time fighting against marijuana legalization, an issue that has become extremely popular with voters everywhere,” said Bill Piper, director of national affairs for Drug Policy Alliance. “The Republican House voted five times last year to let states set their own marijuana policies. And the recent scandal over DNC chair Debbie Wasserman Schultz shows that it is opposition to marijuana reform that is now politically toxic.”

Much has been made of the difference between D.C.’s Initiative and marijuana reform in other states. Yet while D.C. is prohibited from using FY15 funds to set up marijuana dispensaries, legalization will play out in much the same way as it has in other states. Colorado and Washington both had prolonged periods where marijuana was legalized for possession and home cultivation but there were no dispensaries (18 months in the case of Washington). The same will be the case for Alaska and Oregon. In the same way, much has been made of the fact that D.C. has a considerable amount of federal land (twenty percent). But other states with more federal land, such as the state of Washington, where one third the land is under federal control, have not seen an uptick in federal arrests. It is worth also noting that the Obama Administration supports the District’s right to legalize marijuana and has a “hands-off” approach to states and jurisdictions that have opted to legalize.

“Marijuana has been effectively legal in the affluent and white parts of the District west of 16th St for years,” said Piper. “All Initiative 71 does is treat the black community the same way – no arrests for minor marijuana violations.”

The campaign to pass Initiative 71 was driven by public demands to end racially-biased enforcement of marijuana laws and was seen as the first step at taking marijuana out of the illicit market. A broad base of community support from multiple civil rights organizations, faith leaders and community advocacy groups supported Initiative 71, viewing it as an opportunity to restore the communities most harmed by the war on drugs. Two independent studies of marijuana arrest trends in the District of Columbia documented enormous racial disparities in marijuana possession arrests.  Despite the fact that African American and white residents of the District of Columbia use marijuana at roughly similar rates, ninety-one percent of all arrests for simple possession of marijuana are of African Americans; an arrest rate eight times greater than the rate for whites.

In December, Congress passed a federal spending bill which was initially viewed by many to block the initiative. However, as outlined in the Home Rule Act of 1973, voter approved ballot initiatives are enacted once election results have been certified by the Board of Elections. Given, the D.C. Board of Elections certified Initiative 71 on December 3rd, the Initiative was already enacted in advance of the passage of the federal spending bill eleven days later. Letters sent by D.C. House Oversight Committee Chair Jason Chaffetz (R-Utah) to Mayor Bowser and Chariman Mendelson  regarding the enactment of Initiative 71 are largely efforts of political posturing, and contrary to the legal interpretations of Minority Leader Nancy Pelosi (D- California), Representative Eleanor Holmes Norton (D- D.C.) and Attorney General Karl Racine.

“While the House Oversight Committee may eventually hold hearings on this matter,” said Michael Collins, federal policy manager at the Drug Policy Alliance. “The idea that Congress would attempt to arrest locally elected officials or their staff for doing their jobs undermines the spirit of American democracy,” Collins said.

Finally, there has been significant discussion of the District’s elected officials being blocked from implementing a system to tax and regulate marijuana similar to those established in Colorado and Washington, this is not entirely true.  In the appropriations bill passed by Congress at the end of last year, the District was prevented from using only FY15 funding.

Locally elected officials can simply use already-appropriated reserve funds to pay for any further steps related to marijuana legalization, including enacting a system for taxation and regulation. As outlined in Section 450A of the Home Rule Act of 1973, the Mayor and the CFO may use contingency funds to “provide for nonrecurring or unforeseen needs that arise during the fiscal year, including expenses associated with unforeseen weather or other natural disasters, unexpected obligations created by Federal law or new public safety or health needs or requirements.”

“Elected officials in the District are always talking about fighting for the right of self-determination, said Dr. Burnett. “The time has come to see whether that rhetoric has weight or if these are just statements of political expedience. The people of the District of Columbia will be watching.”