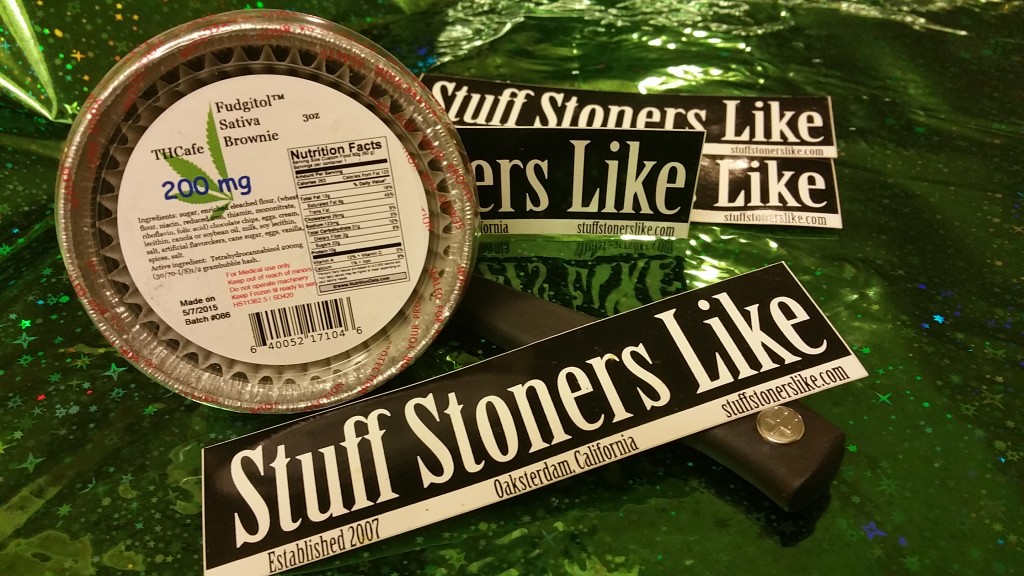 We think weed brownies should be reviewed by the people who enjoy ’em the most; STONERS! That’s why we pay STONERS just like YOU to eat pot brownies and write about it. PS: Learn how to make marijuana brownies below.

Weed brownies effects: After eating this tasty marijuana brownie I was high for a good solid hour. However, various pot brownies effects will differ based on your height, weight, contents of your stomach, etc.
Medicinal Applications: These weed brownies would prove helpful in alleviating insomnia, fatigue, migraines, muscle spasms, joint discomfort, depression, anxiety, PTSD, hypertension, epilepsy and HIV/AIDS. They would also make an awesome appetite stimulant—believe it or not.
Overall: I don’t really know how to make weed brownies or have the patience for those boxed brownie mixes. So pre-made weed brownies are perfect for me. If you don’t know how to make pot brownies, don’t have a pot brownie recipe handy or don’t care to learn then this THCafe Fudgitol Sativa Brownie is the jam. Or check out the weed brownie recipe below—thought it’d throw two in for ya, actually. Anyhow this tasty edible came from the Harborside Health Center in Oakland on Saturday, May 9, 2015 and it was absolutely fantastic—probably one of the best pot brownies I’ve ever had.

Right now the Harborside’s busiest days are Tuesday and Saturday. That’s when the Dark Heart Nursery drops off new clones. People are literally lining up the day before to get their hands on these popular starter plants. And this Saturday was no exception. It was a packed house of happy patients and patient stoners standing in line with eager anticipating eyes observing the dispensary and all its amazing high-grade strains and starter plants! Thank you Harborside Health Center and staff, all patients, and readers! Stays stoned and take care! Oh and in case you are wondering here’s how to make weed brownies from scratch.