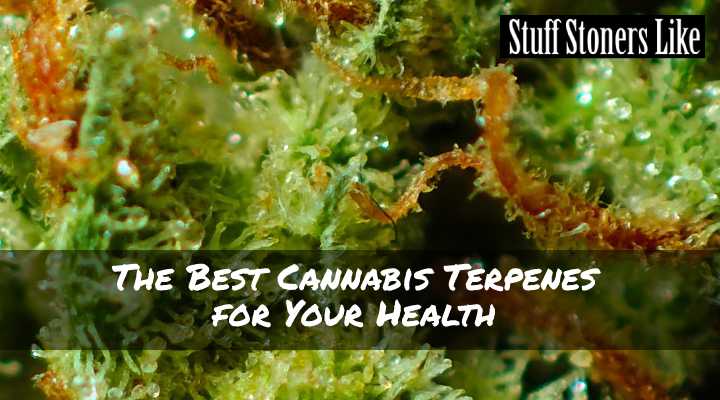 Recreational cannabis is now legal in Canada plus plenty of places in the states. And it’s not just for getting high. The medical benefits of cannabis are often found front and center in people’s minds, not only when they decide whether to consume cannabis or not, but also when deciding which strains to seek out. While THC and CBD are the most talked about chemical components of cannabis, it’s important not to forget the effects of cannabis terpenes and the impact they can have on our health.

What are cannabis terpenes?

Recently, you might have begun hearing more and more about cannabis terpenes in mainstream cannabis media.  Maybe you’ve heard about them but still have no real understanding of what cannabis terpenes do. Without getting too technical, because we know you’d rather read about which terpenes are best for healing, here is a bit of background reading on the topic of terpenes.

Terpenes are organic hydrocarbons contained in the essential oils found in a wide variety of plants (cannabis included) and are secreted by a plants resin glands (the same ones that produce cannabinoids) to protect from fungus, bacteria, insects and other environmental stressors.  In cannabis, these oils are responsible for the varied aromatic qualities, flavour profiles and sensory stimulation found within strains of cannabis flower. They are also largely responsible for the specific healing properties garnered from different cannabis strains, which is accomplished in part by enabling much needed ‘synergy’ with the other cannabinoids.  To deliver and augment the effects of cannabis, terpenes bind themselves to receptors in the brain where they begin interacting with the neurotransmitters.

While found in many plants, cannabis is particularly terpene rich.  It contains hundreds of different terpenes, most of which (or at least their ratios) are unique to individual strains.  Have you ever had cannabis that smells lemony, or piney, or even like blueberries? Those aromas are thanks to a terpene profile unique to that particular strain.  Even with all the variation, cannabis also has a trademark scent – that weed smell. This is due to the most common terpene in cannabis called myrcene, which is found in call cannabis flowers in varying percentages.  Terpenes are why every cannabis strain is different and why they offer such a wide range of effects and medicinal properties.

Moving onto the effects of cannabis terpenes we find that these are just as diverse as their aromas. Their interactions with the human endocannabinoid system are believed to influence or change the way cannabinoids enter and effect our body.  On their own, scientists believe terpenes also impact our brains neurotransmitters, affecting our dopamine and serotonin levels. Some terpenes exhibit sedative properties while others deliver an uplifting boost. Many terpenes have been found to provide relief of arthritis symptoms, chronic pain and inflammation, while others are proving beneficial for brain health, fighting depression, anxiety and slowing degenerative diseases like Alzheimers.  What’s more, terpenes are responsible for something known as the ‘entourage effect’ which denotes the improved symbiosis (relationship or interaction) between cannabinoids. This effect allows terpenes to assist cannabinoids in passing through the bloodstream and blood-brain barrier. It is essential that the effects and relationships of cannabis terpenes continue to be explored. Gaining a better understanding of the correlations could allow medical cannabis to treat specific health conditions.

Do cannabis terpenes get you high?

Getting straight to the point – No!  On their own, terpenes will not get you high.  Terpenes, including cannabis terpenes are not psychoactive, which means that you won’t get high from them.  In terms of cannabis, it’s the contained THC that causes CB1 and CB2 receptors to activate and deliver the psychoactive “high”.   The effect of the terpenes in cannabis is more to influence the type of high experienced while smoking a certain strain of marijuana. For example, feeling happy, sleepy or talkative while being stoned are the type of effects cannabis terpenes control.  On their own, isolated terpenes can provide much of the same effects without the psychoactive aspect. Isolated linalool for instance, is commonly used in skin lotions, bath salts and candles for the uplifting, therapeutic effects it provides.

Most common uses for cannabis terpenes

Wondering what the best cannabis terpene for sleep is?  While there are many that will help, the standout is Myrcene.  Found in the heaviest percentages within Indica strains, this terpene promotes a relaxed, sedated feeling that can help fight insomnia and restless sleep. A rarer terpene, called terpinolene offers powerful sedative effects but it can be difficult to get a hold of.  Linalool is also known to help the body and mind relax, making it a great choice for getting some Z’s.

Cannabis terpenes for chronic pain include myrcene, beta-caryophyllene and linalool.  There are others as well but these three-exhibit amazing analgesic, anti-inflammatory, anaesthetic and muscle relaxant properties.

If you find yourself anxious, you might want to consider trying out some cannabis strains containing the terpenes linalool, limonene and beta caryophyllene.  Primarily found within Indica strains, linalool and myrcene are great at relieving anxiety but be careful because they are also sedative. Especially myrcene can easily make it difficult to get out of bed or function alertly.  Limonene is more common in Sativa dominant strains and is known for its uplifting effects. Beta caryophyllene brings energy and stimulation to provide its antidepressant properties.

The best cannabis terpenes for health

Figuring out which cannabis terpenes have the most medicinal properties and will have the most positive effects on your health can be a dauting task.  As mentioned, there are hundreds of terpenes contained within cannabis, which makes figuring out ‘which does what’ a real science. Even if most of these terpenes feature only in tiny percentages, that’s still an overwhelming number of combinations and relationships to understand.  To make the choices easier for you, we’ve chosen the 6 best cannabis terpenes for your health. Or at least those making the largest impacts…

The most common of all the cannabis terpenes is also one of the most effective.  Myrcene, also found in mangos, eucalyptus and hops, is known for its earthy, spicy and herbal aroma.  This terpene is effective for treating inflammation and pain, while also exhibiting sedative properties and working as a muscle relaxant.  Often used as a sleep aid, Myrcene is commonly found in high percentages within Indica strains and is typically best reserved for nighttime use.

Smelling of pepper and spice, beta caryophyllene is also common to hops, black pepper and rosemary.   Beta caryophyllene targets only the CB2 receptor meaning that it does not result in a psychoactive high.  Therefore it shows great potential for treating arthritis and multiple sclerosis and allows patients to remain alert while medicated.  Beta caryophyllene is also known for analgesic and anti-inflammatory properties as well as helping protect the cells lining the digestive tract.  Alongside these specific effects, this terpene is known to synergize with other cannabinoids because of how it affects the bodies endocannabinoid system.

As the name suggests, this cannabis terpene lends a piney aroma to its host strains.  It can also be found in coniferous trees, orange peels, parsley and rosemary. Known for promoting bronchial tube dilation, pinene also exhibits anti-inflammatory and anti-bacterial properties.  Other uses include functioning as a memory aid and it has been shown to increase cognitive function. For these reasons it is used to slow degenerative diseases such as Alzheimers.

Another commonly found cannabis terpene, limonene is instantly recognizable for its citrus aroma. It’s known for anxiety reduction and for delivering uplifting effects that have helped many people find relief of depression and fatigue.  Limonene is a powerful anti-microbial and has also been used to treat stomach disorders such as acid reflux. It is often used in edibles and topicals due to its ability to assist in the absorption of other cannabinoids. Limonene is very common in Sativa dominant cannabis strains.

Delivering a powerful lavender floral aroma, linalool has long been a favourite of the perfume industry. Delivering calming relaxation, it is known as an effective sleep aid.  Popularly used in aromatherapy oils, Linalool also works to fight anxiety and deliver stress relief. This terpene exhibits anti-depressant properties and has seen use in treating seizures and psychosis. Linalool has shown restorative cognitive effects when used to treat Alzheimers.  Linalool may also reduce lung damage from cannabis smoking because it helps block the occurrence of carcinogenesis.

Also known as alpha-caryophyllene, Humulene works great against inflammation and pain.  It is suspected that like beta caryophyllene, Humulene also targets CB2 receptors to boost immune response and reduce inflammation. As an immune booster, Humulene is known as a cancer fighter, having seen success in reducing the size of cancer tumours. It also acts as an appetite suppressant making it interesting for those in search of weight loss aids.

The future of cannabis terpenes

Looking ahead, it’s easy to see cannabis terpenes having a massive impact on both recreational and medical marijuana.  Only understanding cannabis terpenes and cannabinoids will allow us to the ability to prescribe cannabis medicine made specifically for a certain ailment.  There is still a ton of research to be done, but with the recent legalization scientists now have far greater access and freedom to research the cannabis plant.  We’ve already seen some of the amazing medical possibilities cannabis has to offer and already many positive, beneficial correlations have been made to cannabis terpenes. Continued investment into the study of cannabis terpenes is crucial to increasing our understanding of cannabis as a cure. Fortunately, this seems to be the direction we’re headed.