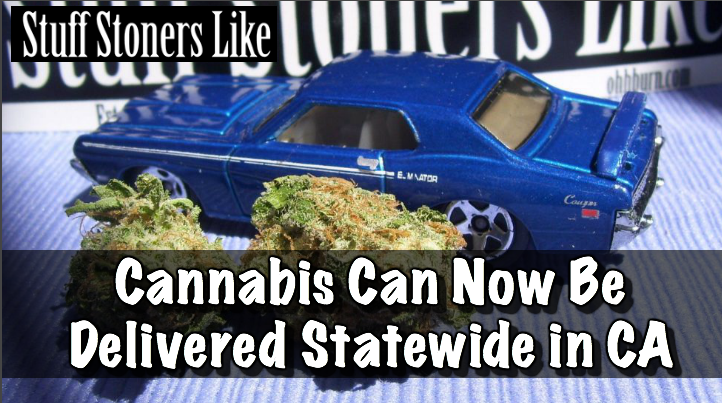 As of Friday marijuana deliveries can be made anywhere in California—yes, even in places that banned weed. Take that prohibitionists! The new rules will become law in 30 days unless California’s Office of Administrative Law objects. However don’t get your hopes up too much because the whole thing could wind up in court.

That’s because there are a lot of haters out there even though marijuana is now legal in an overwhelming majority of states. Groups like the California Police Chiefs Association, the California League of Cities and the United Food and Commercial Workers Western States Council are all on the wrong side of history opposing the move. They even launched an online petition campaign against the proposed rule. They think that pot deliveries to places that ban cannabis erodes local government control and will increase crime in those areas. But they’re wrong. Typically crime goes down when dispensaries move into town. In fact it’s just the opposite—closing marijuana dispensaries leads to more crime.

“Regulated marijuana dispensaries have tough security, checks for identity and legal age and strictly licensed workers,” council executive director James Araby said in a statement. “If marijuana can be delivered anywhere with virtually no regulation, California will lose these safeguards.”

Thanks to online retailers like Amazon just about anything can be delivered even medicine. So that’s why some people have become to expect deliveries especially the sick, weak and frail who depend on marijuana to relieve pain or anxiety. Now if the new rule becomes law those who can’t make it to a dispensary won’t be shut out of the legal market. They still however can participate in the traditional market—which is experiencing a surge in business.

Speaking of the the traditional market, or what hatesr call the black market which is comprised of mom and pop growers and small family farms, the proposal also includes a ban on permit holders partnering with unlicensed operators. We think this will just stifle growth. And we’re not alone. California Cannabis Industry Association spokesman Josh Drayton said that most California cities and counties have exerted local control and don’t allow marijuana, making it impossible for a business such as a beverage maker or nutritional supplement manufacturer to partner with a legal marijuana operator.

He also said that the bureau’s stand against unlicensed operators went too far and will hurt the nascent industry by unintentionally preventing such things as non-licensed celebrities endorsing products and other deals not directly involving marijuana. “The industry has slowed down enough already without this added hurdle,” Drayton said.

The California Department of Food and Agriculture, which regulates farmers, also released its draft regulations which would continue to allow farmers to receive an unlimited number of permits to grow pot.

Anyhow the bureau has maintained that Proposition 64 allows for statewide deliveries. It added explicit language authorizing the practice after several law enforcement officials in anti-pot locales insisted they could arrest licensed deliver drivers in cities and counties that ban marijuana. So hopefully this new proposal will put an end to such ridiculous threats.

Do you order weed for delivery? How fast did it get there? We heard that someone used the Eaze ap in SF and got their weed in 3 minutes. Please let us know in the comments section below.

One Response to “Cannabis Can Now Be Delivered Statewide in California”