Dude, Christians sure are taking a beating this week with the Supreme Court’s ruling in favor of the Separation of Church and State in a dispute between Hastings, a San Francisco law school and a Christian club, the Christian Legal Society of Assholes, that excludes gays and nonbelievers, but at least the best medical marijuana in all of the United States of American isn’t still named God’s Pussy. Dude, who would have ever saw a problem with that name coming?

Over father’s day weekend, High Times magazine held the completely sold out First Annual High Times Medical Cannabis Cup in San Francisco. Despite long lines and crazy congestion the event was a smashing success and culminated on Sunday with the crowning of the best pot in the land, broken down into categories for best Sativa (the kind of herb that gets ya high), Indica (the kind of herb that gets ya stoned), and a bunch of other shit. All the key players were there on Sunday evening to hear who’d hoist the Cup including Dennis Peron, Will Foster, Jorge Cervantes, DJ Short, BOG, MzJill, and SubCool. And, to everyone’s surprise…it was a strain called God’s Pussy that landed the top honors! Many scoffed at the name, but the mainstream press reported on it, which was all out hilarity, and for a day or two the best herbal remedy in the land came in the form of  God’s Pussy. (check out our review of God’s Pussy)

But, within a few days of the glorious event High Times had officially changed the name of the winning strain to Vortex. WTF? What happened to God’s Pussy? Does it really even exist or was the mighty High Times, defenders of FREE SPEECH, offended by all the blasphemy? “I think growers should be a bit more creative with their names,” Executive Editor for High Times magazine told Stuff Stoners Like. “Strain names like Green Crack or God’s Pussy are offensive. As a creative community, I think we can do better.”

“The next day after the event, the uproar on the internet grew loud enough that the winning listing was changed to include Vortex along with an ‘aka’,” said SubCool of TGA SubCool Seeds who also entered the exact same strain of herb…interestingly enough, the two samples tested within .016 of each others’ potency.

“When they announced the winner of the Sativa as Jack Grean’s God’s Pussy the female announcer struggled with the offensive name but sure enough the world now knows what a mockery this event was to the Medical Movement, women, and anyone who believes in a higher power. I was shocked to see no mention of the strain’s real name in any High Times press release,” SubCool told Stuff Stoners Like.

Apparently, Jack Grean of GreanBicycles dispensary grew out a pack of Vortex seeds from SubCool’s TGA Seeds. By the way…Vortex is a cross between Apollo-13 and Space Queen, an 80/20 Sativa to Indica hybrid that’s spacey name was decided upon by 1000 growers who entered a contest to name the strain so there’s a bit of legacy to the name. Grean, allegedly found a special phenotype, grew it out and renamed it God’s Pussy, which is a practice you see happen over in Amsterdam, the home of the Cannabis Cup for the last twenty-two years. 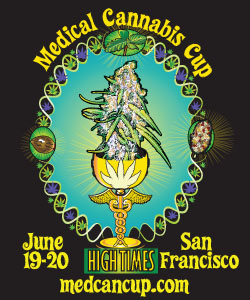 “As the complaints piled up on High Time’s website below the results, by Wednesday morning the offensive name had been removed and a video posted where the winning grower acknowledges that it was indeed TGA’s Vortex that was the strain he entered and then renamed,” said SubCool.

“While I really really wanted a cup myself I am really happy that all it took to win the cup was a pack of my seeds,” said SubCool.

“I hope the High Times crew takes this as constructive criticism and makes some changes for the next event. I have been in contact with the grower (Jack Grean) who said he’d never won anything in his life and just didn’t expect to win at all and he couldn’t feel worse about the whole ordeal. High Times has been awesome after the screw up making amends and have made it clear that Vortex won.”

They Grow Up Sooooo Quickly