Maui Wowie is probably one of the most popular and cherished marijuana strains of all time. A proud product of the 1960s flower power—this Sativa’s unique spicy flavor and sizzling electric high are the stuff of legend. Unfortunately it’s all too rare nowadays. In fact it’s nearly impossible to find. That’s because the strain has been purposely snuffed out along with thousands of other priceless genetics all over the state—single-handedly.

It’s the work of a 30-year-strong drug warrior named Don Shearer. This year Shearer is set to co-open one of Maui’s only two dispensaries on the island. Yep Hawaii’s most hated helicopter cop is bound to monopolize the medical marijuana industry along with his crony friends. One is a wealthy landowner with possible ties to Monsanto named David Cole (one of Shearer’s long time employers) and others. They applied for multiple licenses—we hear as many as 20—overwhelming the system and all but guaranteeing a pot permit. Unsurprisingly Cole won one of the two coveted licenses and Shearer will soon to initiate the pot profiteering. Plus we hear that Shearer is first in line for a license as the Maui marijuana industry matures. The other license was awarded to Pono Life Sciences opening in July, 2017 on Maui.

A history of hatred

“During the peak of the helicopter drug wars, Hawaii drug warrior copters were flying day and night, as low as 50 feet off the ground in violation of aviation laws, scaring children and animals, invading everyone’s privacy, especially terrorizing Native Hawaiian communities, harming the environment and native animals, carrying state and federal police and military personnel who poisoned and ripped up hundreds of thousands of cannabis plants,” says Issac, a disabled Vietnam veteran who’s been growing weed on Maui for decades. 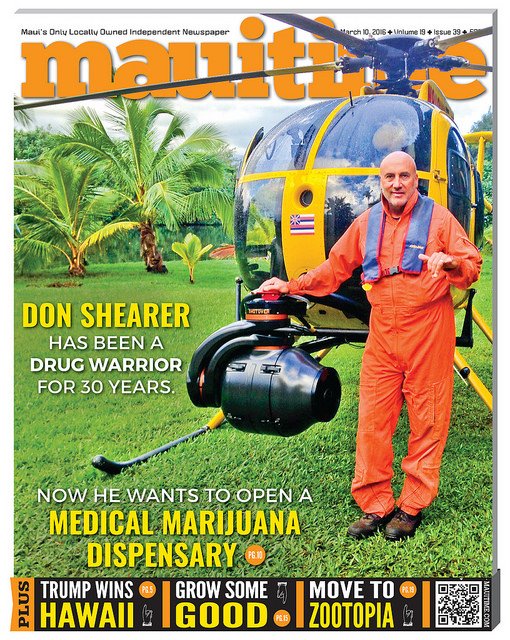 “When you hear the chopper coming, and you can hear it it’s much different than a tour chopper – it’s like an angry buzzsaw… you get nervous,” says BC Rich* a Maui grower with a fat green thumb told us via Instagram. “Even when you’re ‘good’ with your plant count. He circles like a shark making the roof and windows shake and the kids cry. Total fear campaign. And it used to be worse.”

During the 80’s Shearer and his cronies executed bogus search warrants based on false information, trespassed on private property and in some cases removed plants that weren’t even—ultimately costing costs taxpayers tens of millions of dollars, destroying thousands of pounds of much-needed medicine and ruining multiple lives along the way.

“Shearer’s invasive helicopter strikes terror in the hearts of many Maui residents—not just legal marijuana growers,” says a master breeder on the island who has create a line of seeds with traces of the original Maui Wowie, we’ll call Charvel Jackson*. “Wowie is all but wiped out thanks to Shearer and his cronies who actually ran operation “wipe out” during the 90s. They drew grids across the entire state of Hawaii into 10-kilometer squares so they could effectively control the plant population and steal genetics. They’re continuing the tradition but this time they’re looking to eliminate the competition,” he says.

What’s even more ironic is Shearer tells Maui Time that  if he’s granted a license to sell medical marijuana he won’t allow his employees to use it. WTF? Not only is this wrong it’s a crime. Hawaiian law bans employers from discriminating against legal cannabis users. When O.penVAPE was exposed for the same sketchy practice they were immediately mocked across the industry and quickly reversed course.

“Shearer is the last person that should be awarded a dispensary license—he’s ruined so many lives, destroyed so many plants and has poisoned the Earth. He’s the enemy to marijuana and it’s followers,” says Charvel Jackson. “What should be done is allow Maui growers the ability to cultivate and sell the fruits of their labor to the dispensaries. Nobody wants pot grown indoor under huge light in substrates from space—that have nothing to do with Hawaiian pot.”

Shearer should “have his dispensaries give away marijuana as a way of apologizing to our community,” Isaac tells Big Buds. “He did serious wrong to the land, the people, and the plant. His love of money led him to wage war against a healing herb made by the Creator. I advise him to repent, and make amends.”

“I think there’s reason to believe that marijuana grown here on the islands are of higher quality and higher therapeutic benefit than anywhere else in the world,” Dr. Andrew Weil told the Maui News earlier in the year. “I think we can have a model here to really set a standard on how to do this right for other states.”

* Names have been changed