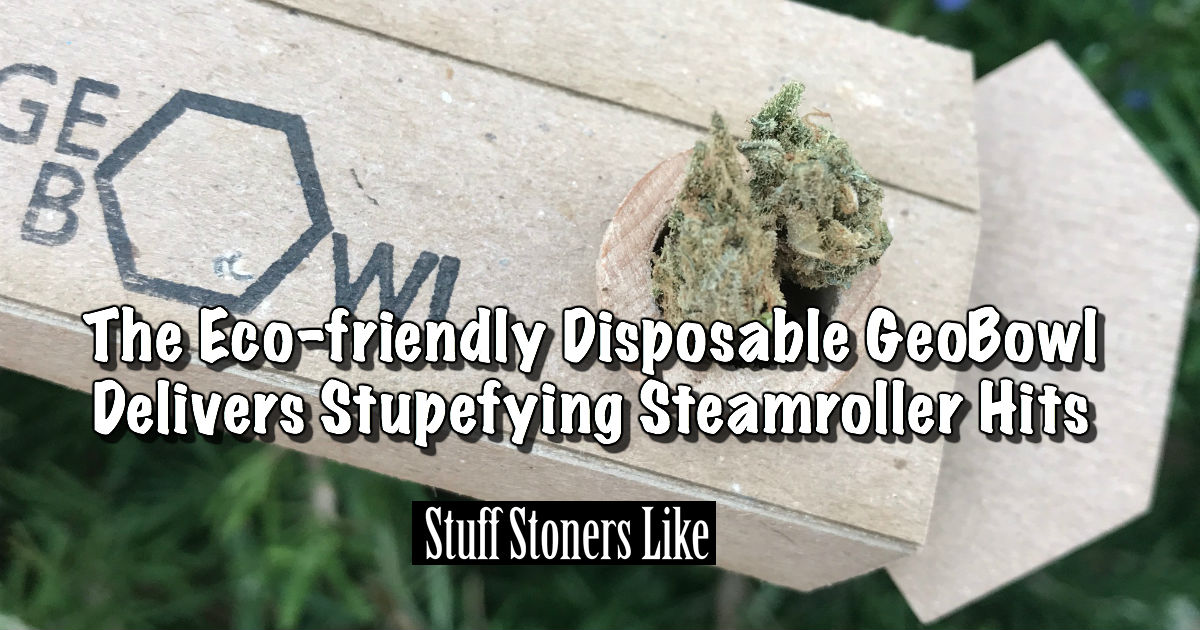 There is just such a product. Our buds from GeoBowl introduced us to what they say is Mother Nature’s favorite pipe. We don’t disagree. It’s called the GeoBowl. It’s all natural, fits in your pocket, pops out to be packed and delivers a stupefying steamroller hit. Why wouldn’t Mother Nature or anyone else except for maybe like Jeff Sessions love that?

But before our buds put the GeoBowl into mass production they’re curious to see what the average stoner thinks about it. So naturally they turned to StuffStonersLike.com because c’mon who knows more about what stoners like than we do? So read what we’ve got to say about the eco-friendly GeoBowl and maybe when you get to the bottom leave us a comment telling us if you’d buy one of these things? It retails for only $5 on GeoBowl.com. That’s less than a pre-roll and you can fill it about 20 times before it’s spent. So yeah, leave a comment below and let us know what you think of this thing?

Okay so why would you want a GeoBowl? Actually why wouldn’t you want a pipe that won’t break, that costs penny’s on the dollar and delivers big fat steamroller hits? In case you don’t know—steamroller’s are like a cross between a glass pipe and a long glass tube. They deliver big milky hits like a bong but without the messy water that’ll destroy your carpet if you spill it. Plus steamrollers are easier to clean. Come to think of it—nothing’s as easy to clean as the GeoBowl. Because after you pack it 15 to 20 times you just toss it in the green bin—it’s completely biodegradable and broken down in months instead of breaking into a million shards when you drop it on the garage floor.

Let’s face it sometimes you’ve gotta be covert. Let’s use concerts for example. At some gigs you can whip out a doober and make a ton of friends. And at other shows—you know depending on the artist—you’ll have to sneak a quick hit from your trusty pipe. Now substitute concert venues with hiking trails, beaches, parks, campsites, grocery stores, maybe the workplace bathroom if they’ve got good enough ventilation—you name it. You can rock the GeoBowl basically any place where you can blaze up and not get hassled. Think about how awesome this thing would be on your next vacation? You’re not trying to fly back with a dirty pipe, right? Sure you could use a vape pen and some concentrates instead—but flowers always do satisfy. And this thing hits hella hard. Plus nobody’s stopping you from adding some wax or shatter to the greens in your GeoBowl. Go right ahead and dress up that flower with some fancy dabs or isolated THCA crystals or whatever. It’s all good. Okay so here’s how to work the GeoBowl:

One thing that we noticed when using the GeoBowl is that it’s important to make sure that the little wooden holes in the bowl point front to back. This not only improves airflow it’ll keep the GeoBowl from getting too hot and possibly catching fire. Which leads us to say be careful with this thing. It’s only wood and paper—which are both flammable. Don’t take a blowtorch to it. Don’t hold a flame on it forever. Don’t stick it back in your pocket when the bowl is hot or filled with glowing embers. Don’t use it at a gas station while filling up your car, don’t use it in a vacuum chamber, underwater or around chainsaws—you get the idea. Anyhow like we said you can score a GeoBowl for like five bones or rock a three pack wrapped with a hemp wick for $12 on GeoBowl.com. But more importantly let us know what you think of the GeoBowl? Should the GeoBowl guys make a ton of ‘em? Think your stoner friends would buy one? Think you’d use it? Let us know in the comments section below.