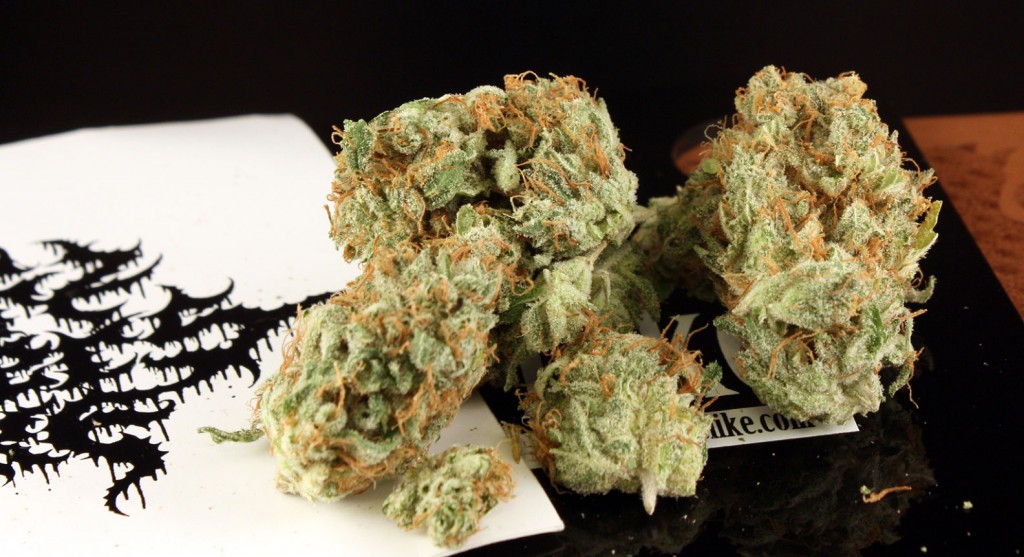 Genetics: Sour Dubb X Chem Sister
The internet lore surrounding Gorilla Glue says that it was one of those accidental strains, happening when Josey Whales had some Chem Sis plants he was growing turned into hermaphrodites and pollinated his Sour Dubb. Tired of getting seeds everywhere, he tossed them out, but his friend Marrdog still had some seeds. He grew them out and kept the #4 phenotype. Thus Gorilla Glue #4 was born. Or so the legend says.
From Josey Whales on Seedfinder.eu:

“A few years ago i was growing sour dubb and chem sister and some others, the chem sis threw a couple nanners and hit the sour dubb, i held those seeds for a year or so and finally popped 5 of them, they were ok, really had one nice pheno but i lost it in a security scare, the other 4 pheno’s all hermed on me and totally seeded my whole stadium run, i was pissed, i got rid of all of it to a friend, marrdog. he kept a lot of the seeds and about a year later we had a joint grow going and he popped i believe it was 6 of those seeds, i was really concerned that they would herm and didn’t have much hope for them, they were all female, we ended up with pheno’s 1 2 4 and one we called the runt, all were outstanding, the clear winner though was the gg 4. so thanks to marrdog and lady luck.”

Appearance and Feel: Damn this shit is sticky as fuck. Wow. But then again, with a strain testing out at over 25%, that’s to be expected. Gorilla Glue is no joke, it will glue your fingers together, and to anything they touch after handling it. The buds are nice and tight with a fantastic calyx to leaf ratio, and totally covered in trichomes. The pistils are a light brown color over a lighter green calyx.

Smell: Spicy, kushy, pungent and earthy right out of the bag. Very smelly. My girlfriend says it smells like dirt, and my new weed smoking friend who’s visiting from Florida says it smells like A1 sauce. I don’t know what to believe anymore. It’s definitely earthy, and definitely pungent. Possibly even a little sour, but that could just be in my head.

Flavor: The Gorilla Glue has that taste of pure fire. Raw, unadulterated fire. It tingles the nose and has a slight minty aftertaste. This shit tastes real nice. Tons of tasty terpenes. There’s a diesel taste in a joint that has an almost creamy smoke to it.

Top 10 Awesomely Cheap Bongs
What is the Best Soil for Growing Weed?

High: The high is heavy, and for a strain testing at 26% THC newer smokers should definitely take this one slow. Bonghits pack full expansion, and if you take a big enough one, you’ll see stars.

Make sure you have a place to sit, as you might be needing a little dirt to plant your dick into. That goes for you too ladies. I speak of the metaphorical dick here, which we all have.

Overall: Now this is more like it. I wasn’t all that impressed with the Top Shelf Lemon OG, but their Gorilla Glue is on point. It has a great taste, smell and high that we cannasseurs look for in our cannabis.
I write this time and time again, but people need to understand it’s not just about THC content. Of course it helps, but there’s so much more to it. This shit right here has it all, and for that I’m giving it an eight. The Gorilla Glue from Top Shelf is definitely stuff stoners like.