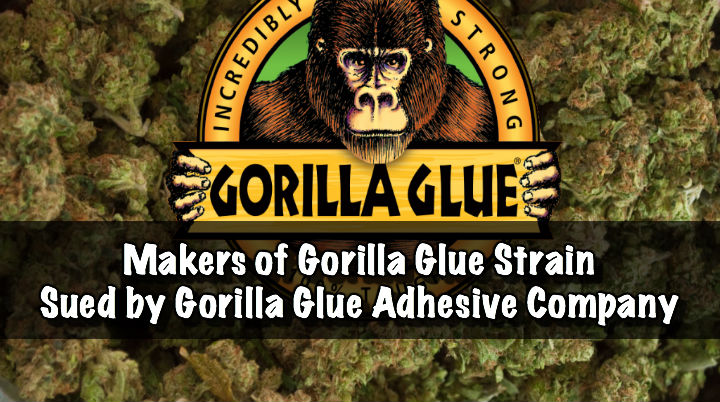 The breeders who created the super sticky Gorilla Glue Strain are being sued by the Gorilla Glue company aka the people who make the popular adhesive. Yep Nevada-based GG strains, the guys behind the popular Gorilla Glue strain, was recently hit with a federal trademark infringement lawsuit claiming that they are unlawfully advertising and selling products and services under a confusingly similar name to Gorilla Glue’s trademarks.

In the past weed was sold completely underground so growers could name it anything that they wish. That’s one reason why you’ve probably heard some really outlandish and even offensive strain names. We’re talking anything from Green Crack to God’s Pussy. However now that there are legal business creating, marketing and selling marijuana naming it is extremely important—not only from a marketing and advertising perspective but now from a legal angle. How much longer will marijuana growers and retailers be able to get away with selling products with infringing or even offensive names? Well the Gorilla Glue co v GG strain battle may be the first precedent setting case. So it’ll be as important as it is interesting to watch it play out.

When a companies has a hit product or service they typically trademark that name to avoid somebody or some other company using it. This is the way most industries operate, however the federal government refuses to trademark marijuana strains because weed is still illegal on the federal level. So you’ll still see strains on the market that seem to violate trademark laws including—Candyland, Grape Ape, Sour Patch Kids, Zkittles, Szprite. Strains named after celebrities like Bruce Banner and Berry White are also still on the market. But how long?

According to Thomas F. Hankinson, Gorilla Glue Co.’s attorney the strain makers are in violation and dilution of Gorilla Glue’s trademark rights. So what started as a harmless nickname for a plant—Gorilla Glue, called this because of its super sticky touch and appearance—has gone on to garner national attention and may impact the intellectual property rights regarding the entire marijuana industry. Now that marijuana is legal in several states for adult use names could fall under regulation.

“Gorilla Glue has been using this trademark for about two decades and has invested a lot in building the brand. This is a family-owned company that owes it to its stakeholders, including its employees and customers, to protect those investments,” a statement from the plaintiff’s attorney, Thomas Hankinson read. Hankinson is from the Cincinnati-based law firm, Keating Muething & Klekamp.

Apparently the main focus of the 140-page lawsuit is to get the Gorilla Glue strains guys to stop using the Gorilla Glue trademark. However the suit also seeks unspecified monetary damages, including “any and all profits arising from or related to Defendant’s unlawful actions.” Because the Gorilla Glue strain is legally sold in many commercial cannabis shops and sold in many more businesses that cater to the medical marijuana market the glue manufacturers feel the strain makers should be held to the same standards of fair play in branding that apply to all other businesses,” Thomas F. Hankinson, Gorilla Glue Co.’s attorney. They feel that the marijuana product is no different than any other ordinary product on a store shelf—despite the fact that it is only sold in store licensed to sell marijuana products. But they have no ill will towards marijuana or the cannabis industry at large they say.

“This lawsuit is not a comment on any federal or state policy matters, medical or pharmaceutical issues, or choices in recreation,” the complaint said. “But Gorilla Glue has a famous, valuable brand built through tremendous products and strong consumer confidence, and as a business matter must take appropriate steps to protect its rights.”

The super potent and super sticky Gorilla Glue strain hit the market in summer of 2016. The Gorilla Glue strain has two main phenotypes that come from the same parents Chem’s Sister, Sour Dubb, and Chocolate Diesel. The Gorilla glue strain was originally created by Josey Whales and Lone Watie on accident. According to the interwebs Josey Whales was growing some Chem Sister plants that turned into hermaphrodites that pollinated his Sour Dubb plant.

“If we settle with these guys outside of court, they’re going to go after everybody,” GG Strains co-founder Ross Johnson said. Everybody means all the dispensaries and growers that are involved with Gorilla Glue strains.

Johnson brings up a good point. Instead of just giving into the larger company standing up to them could set some sane cannabis trademark precedents. Because the Gorilla Glue strain suit isn’t the only trademark cannabis case that’s made headlines recently.

“We’re not millionaires, we’re cannabis breeders and cultivators,” Johnson said in a statement. “Most people have backed down from corporate businesses, so no case has set precedent as of yet. Down the line, this (case) will set the precedent.”

There’s no reason for the market confusion. How could someone mistake a thin mint cookie with weed? Nobody is going to confuse a super sticky adhesive product with some super sticky buds. Dove soap and Dove chocolate bars are able to coexist without anybody confusing body wash with chocolate syrup, right?

“We’re not selling glue,” Catherine M. Franklin, GG Strain’s interim CEO, said, adding that Gorilla Glue #4 was denied a federal trademark because it was a federally illicit substance, not because they were violating trademarks on Gorilla Glue Co.’s products. “It was a name that kind of stuck, we didn’t piggyback off anything. Nobody is buying this thing because they like glue.”

However the Gorilla Glue Co., don’t really see it that way and feel that it’s “time to treat the multi-billion dollar (weed) industry the same way as Fortune 500 companies.” GG Strains not only took the name, but intentionally traded on Gorilla Glue’s reputation for high-quality adhesives’ ‘stickiness,” says says the glue-makers lawyer

“We’re fighting to set a precedent, the cannabis industry is full of cultural references, we don’t want it to go back to the days of Reefer Madness. There are plenty of other corporations waiting in the wings to see if they get the green light from the courts on this case,” read a statement from GG Strains’ founders Joesy Whales and Lone Watty.

“It could have massive consequences for the industry. We have to draw a line in the sand, and we need to hold this line together or we’ll regret it before this industry has the clout to stand up for itself,”

Anyhow GG Strains are sure that growers and retailers can continue to sell their famous Gorilla Glue strain just under a different name. They’ve embarked on a massive campaign to reach out and let everyone know that the new name should just be GG4. We’ll be sure to keep you posted on the Gorilla Glue Co. v. GG Strains case because it’s outcome will have a huge impact on the cannabis industry when it comes to intellectual property rights.