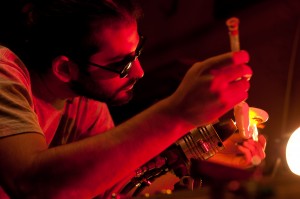 It’s amazing that some highly-talented artists can actually transform a molten glob of glass into…not only a beautiful work of art…but, a beautiful work of art that you can use to smoke WEED! When we came across Etai Rahmil a while back, we were super stoked by his work and wondered what it would take for a custom STUFF STONERS LIKE piece of glass. Well, a few hockey tickets, some cash and a couple weeks later…we had this most amazing work of art…that we could use to get STONED.

Etai who created Chicken Coop Glassworks in Eugene, Oregon, recently took a few minutes to rap with us about his craft and the mighty herb. Interestingly enough, this glass-blower’s favorite method of smoking weed? A JOINT! “That’s purty fuckin’ tellin’, dude. So, your glass-blowing skills are obviously pretty bad-ass,” we said. “So tell us, man…how are your rolling chops?”

Check out www.etairahmil.com for a list of shops where you can find Etai’s work as well as how to get in touch with him to order yourself some custom glass… 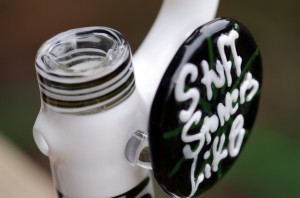 STUFF STONERS LIKE: So, man, where ya from and what got you into blowing glass?

Etai Rahmil: I grew up in San Jose, CA, then moved to Los Gatos, Ca. I moved up to Eugene, Oregon for school, and found glass instead. I got a job at a head shop in Eugene called Midtown Direct Smoke Shop. That introduced  me to glass and pushed me to get started on the torch. There is a huge glass scene in Eugene.

STUFF STONERS LIKE: How many pieces did you make before you felt confident enough to start charging for you shit?

Etai Rahmil: For the first year I was giving everything I made to friends. Im a perfectionist when it comes to my art, so it took me a while. A few months after I set up my own shop in my renovated backyard chicken coop I started selling to local shops. Before that I was learning at a friends place.

STUFF STONERS LIKE: Nice, man. So just how does someone get into blowing glass?

Etai Rahmil: Look online for local glass studios and schools, or ask friends if they know any glass blowers interested in an apprentice. Some universities have glass studios and offer workshops, which can sometimes end up being the cheapest option. STUFF STONERS LIKE: Do you make a living doing this?

STUFF STONERS LIKE: How hard is this to learn?

Etai Rahmil: It is definitely not easy. You just have to stick with it. I usually make the comparison to learning how to play an instrument; The first 6 months are frustrating, your hands hurt, and nothing sounds good. But, when you can start playing what is in your head, things get interesting and you can really start to get creative. Same thing applies with blowing glass.

STUFF STONERS LIKE: Looks like you need some healthy ass-lungs to do what you do…so…who has a greater lung capacity…you or big-bong hittin’ Michael Phelps?

Etai Rahmil: Ha, I don’t have anything on Phelps. There is actually a lot less physical blowing than people think. There is a lot more shaping and sculpting.

Etai Rahmil: There are tons and tons of steps. Basically there are a bunch of different pieces made first including the mouthpiece, the neck, and the can. These pieces are also made out of several sections. Then, it is all put together. The bubbler has 12 difference sections.

STUFF STONERS LIKE: How long does a usual piece take to create? Etai Rahmil: It all depends on how much detail is wanted, the longest time I’ve spent on a piece was about 17 hours, over about 4 days.

STUFF STONERS LIKE: How do you not burn your lips?

Etai Rahmil: Glass is actually a insulator not a conductor like metal, so really only where you heat gets hot. All the pieces are worked off of a blow tube that is connected to the piece, and is removed at the end. In the video it shows it well.

STUFF STONERS LIKE: We burn ourselves just lighting a joint, man. But, to do what you do, man,  you’re working around some serious dangerous shit…

Etai Rahmil: I work around hot, sharp things. I get burned and cut all the time. It sucks. Without proper ventilation, inhaling gases that escape the torch and the melting glass can definitely do damage to the body.

STUFF STONERS LIKE: How often does shit break while you’re working on it?

Etai Rahmil: Not too often, if it does, it means I’m pushing myself. Or, I did something stupid. Little mistakes can lead to total devastation. That is why we learn from them!

STUFF STONERS LIKE: Have you ever made any of those new fangled bongs that use a nail instead of a bowl…to smoke concentrates outta?

Etai Rahmil: Yup, people call them “direct inject”. They are all the rage right now and a lot of my customs have them.

STUFF STONERS LIKE: How do you come up with your ideas? 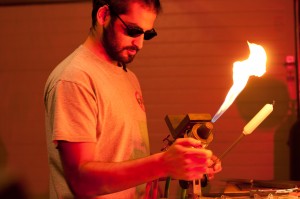 Etai Rahmil: My inspiration comes from a lot of places. They come from my dreams, from looking out the window, or from looking at other peoples’ work. The vision is half the project.

Etai Rahmil: I met my buddy Jeff Ebner through a friend, and quickly after learning that he was a photographer he was shooting my latest creation. He is by the far the most talented photographer/videographer that I know. I’m definitely lucky to have him shoot my art.

STUFF STONERS LIKE: Any tips for clumbsy-ass stoners like us who break every glass object they touch?

Etai Rahmil: I used to work in a head shop, so I know a thing or two about how not to break glass. And the one thing I said to newbies was: look the piece your going to pick up, grab it like it will break if you drop it (duh), and don’t take your eye off of it until it is standing. And after you use your tube put it somewhere safe!

Etai Rahmil: It took about 3 days of work. Etai Rahmil: I recently finished a big upline piece for Jeff, my photographer. The piece turned out to be my biggest piece to date. It’s almost a foot and a half tall and is heavy as hell!

STUFF STONERS LIKE: You definitely are an artist, but your medium eventually could ultimately involve WEED…does that hinder your marketability as an artist?

Etai Rahmil: It is really a goal of mine to show people that just because it is a pipe, it doesn’t mean it is not art. But to answer the question, yes it does. I introduce myself as a glass artists that makes anything and everything. You just don’t always know how people feel on the subject and as we all know, people can make judgements.

STUFF STONERS LIKE: Would you rather go without WEED for a week or listen to Coldplay?

Etai Rahmil: This is the hardest question you’ve asked! I really don’t know what to say…

STUFF STONERS LIKE: What plans do you have in the future with Chicken Coop Glass?

Etai Rahmil: I want to eventually ignite a glass culture somewhere that is deprived of the art. I would like to open a glass school, supply shop, and retail shop (called The Chicken Coop of course). My goal is to make glassblowing accessible to as many people as I can, and to make some really cool things along the way.