Kicker is a punk band from Oakland that sounds pure 80’s, featuring current and past members of Neurosis, Filth, and Dystopia, along with veteran road dog Pete the Roadie on vocals. We got Dave Ed on bass,  Toby playing drums, Mauz on guitar. Kicker formed on a rainy night outside the legendary Berkeley punk co-op known as 924 Gilman. A few lyrics and some guitar riffs led to regular rehearsals and eventually a demo. Soon it was time for the first gig. As it turns out, Roadie is a natural. STUFF STONERS LIKE: According to your bio Kicker is here to “drink our beer, eat our chips and blungen our ears with punk,  but isn’t that the job of freeloading journalists like us to drink the rock stars beer not the other way around?

Dave: Know this, you’re not gonna take our beer!
Pete: Nope no fucking journalists in our dressing room, no absolutely not, you can buy us drinks though.

STUFF STONERS LIKE: Ask someone to name a punk band and usually the first band they mention is the Ramones. So like if there were no Ramones would there be no punk?

Pete: Ramones aren’t punk.
Toby: Oh the answer is no to that question.
Dave: UMMM yeah I think history might tell a different story. 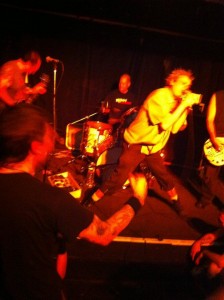 STUFF STONERS LIKE: We’ve been to plenty of punk gigs and the one thing we seem to always notice is snot-rockets and spitting. Why is it so punk to spit?

Dave: I get heartburn when I play on stage. I actually get a little bit of acid reflux and I always spit on stage. Yeah, being spit on, I’m glad I was not growing up playing punk bands in England where did they did gob on bands, that sounds like a lot of not fun, outrageous, outrageous behavior. Neurosis played in Arcada or is it Eureka one of those two places in the early 90s. They decided to spit on bands because it was fun. We got gobbed on. It was not fun and it wasn’t fun for them cause we did not react very well.

STUFF STONERS LIKE: How many beers would you need to drink in order to punch Bono in the face?

Dave: None.
Pete: Absolutely none

STUFF STONERS LIKE: how much did you cry when you seen Gene Simmons face without make-up.

Pete: Gene Simmons is a wanker!

STUFF STONERS LIKE: Is it easier for someone to understand Ozzy Ozborne if they are stoned or drunk?
Pete: Ozzy Ozborn is a wanker! 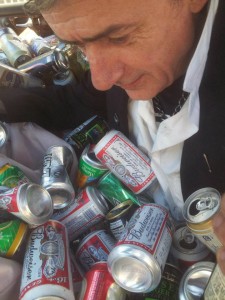 STUFF STONERS LIKE: You have probably been all over the states, so is there a particular state where you think the grass is greener, tastes better, contains more crystals seems more potent?

Mauz: I thought California had the best weed. That grass is greener!
Pete: Vancouver has the happy grass; yeah if you want some really happy grass go to Vancouver.

STUFF STONERS LIKE: Duck tape is a touring musician’s best friend but they say it makes lousy roach clips any better ideas?

Dave: Ah roach clip, no feathers please. Oh you know what works great, ceramic Grolsch beer cap, I don’t know if there is ceramic anymore but any Grolsch style cap, if you take it out of the wire housing that is around it you just stick the joint in one end and you put your mouth to the other end (laughing, that is what she said) you don’t actually contact the joint at all, you don’t contact the fucking paper, Hallelujah, so you just smoke it all the way down. In Europe everyone just calls it a stone, do you have a stone I could borrow? A lot of them are plastic now, in Europe they are plastic now, but some of the better beers like some of the German beers (burp) anyway. Blaw blaw blaw.

STUFF STONERS LIKE: Any of you know the reason why ex-punk legend Glen Danzig is so angry all the time?
Dave: He’s short.
Toby: He is not punk, yeah he never was punk and everyone hates him, and he’s short and he’s a wanker, I saw a video of him getting knocked out…
Pete: Yeah everyone seen a video of him getting knocked out that is why he is so angry all the time cause of Youtube.
Mauz: That and that kitty litter photo.
Dave: Oh and his neighbors got mad at him too because one of his neighbors rented a dumpster and they had it parked down the block from his house. And they have him on video tape taking big chunks of cement from his yard that the neighbors have actually been yelling at him for years to remove and throwing it all into the dumpster.