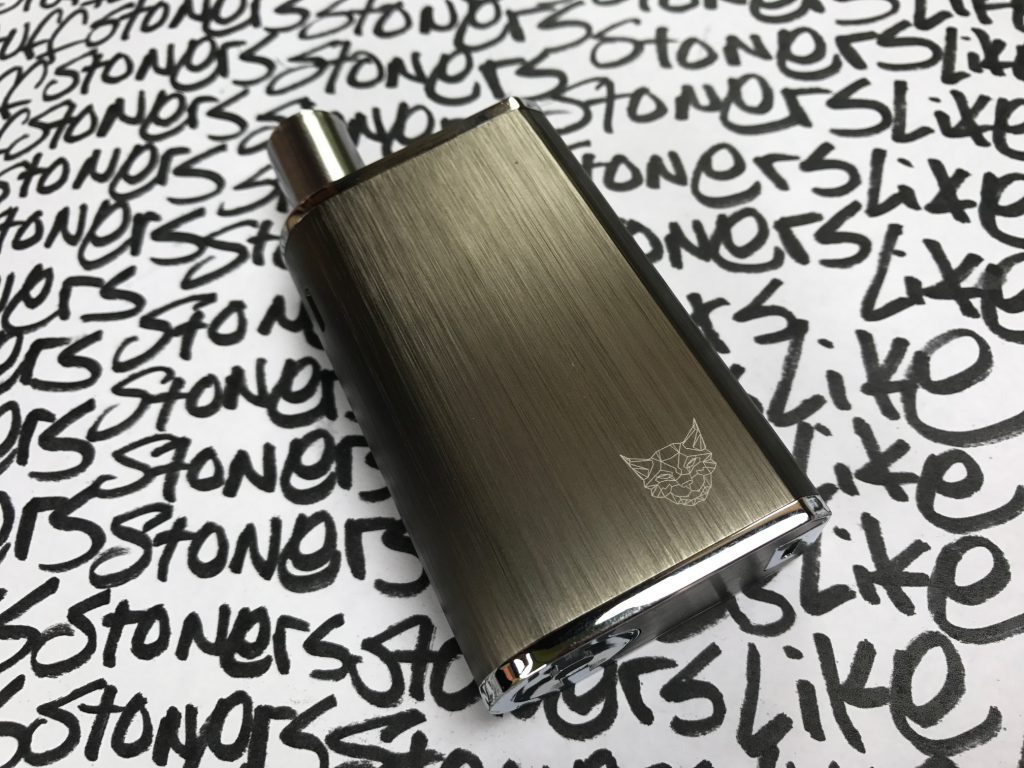 We recently got our hands on the Linx Gaia portable dry herb vaporizer. Linx is known for making pretty high quality wax pens like the Hypnos and Hypnos Zero. The Gaia however is their first entry into the dry herb vape pen market. It’s also one of the first dry herb vapes to utilize a quartz oven that’s nearly 100 percent convection. So how’d vape hits from this thing taste? How’d it hold up after several sessions and overall is it worth the fairly low $160 price tag?

Right out of the box this thing looks super high class. It’s one of the most striking an exquisite vapes we’ve reviewed. It’s wrapped in brushed aluminum with shiny chrome binding around the edges—giving it a clean modern look. And it’s rounded on one side making it easy to palm and just slightly bigger than a Zippo lighter making it really easy to hide while using or not.

The Linx Gaia is built like a tank. It’s just heavy enough to feel expensive but light enough where it’s not going to weigh you down if ya put it in your pocket. With care it seems like this thing will last a long time. It houses an easy-to-read and LCD display along one side with large power button and two smaller buttons to increase or decrease the temperature. It also utilizes a borosilicate glass mouthpiece and a magnetic cap.

It’s not the deepest cooking chamber we’ve encountered on a vape—looks like it’ll hold about a quarter gram of finely ground weed—but at least it comes with a handy stirring tool that screws into the bottom that you can use mix your weed during mid use to make sure you evenly burn your herbs and help evacuate ‘em when they’re cashed.

The Linx Gaia heats quick. We set it at 380 and it reached that temperate in about thirty to 45 seconds. As the oven heats the display shows a cool little flickering flame icon. Once it reaches the desired temperature the flame stays lit. At that setting the Linx Gaia delivered medium sized vape clouds. As the session continued and we took a few more long inhales the vape clouds thickened a bit. To derive bigger clouds we turned the Linx Gaia to 400 and were treated with slightly thicker vape clouds—however the metal surrounding the mouthpiece became a bit warm after a few moments. 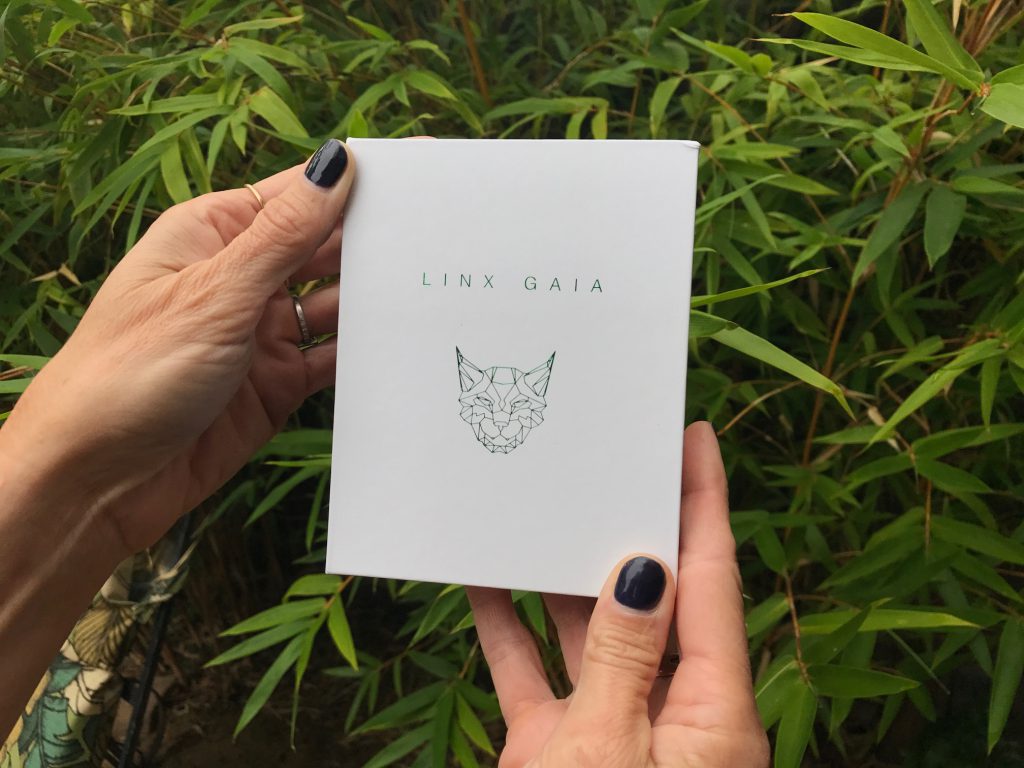 The taste of the vapor is where the Linx Gaia really shines. Our herb tasted clean and fresh at 375. At 380 the vapor still tasted just as flavorful however the vapor itself was slightly too warm. It seems that the sweet spot on our unit was right around 377 to 378. At 400 degrees and beyond you’re going to get that toasty and familiar popcorn-ish flavor and basically scorch the weed and defeat the purpose of using a vape in the first place.

The Linx Gaia is perfect for a personal few minute session. You could easily sesh with the Gaia and a friend and both feel pretty stony afterwards. The battery held a charge for at least four to five sessions and the rugged power cord that’s included allows you to vape while the Linx Gaia is being charged. You can’t even user your headphones while charging the new iphone.

After many many sessions the Linx Gaia continued to perform like a champ. The one thing we did notice after some heavy use is that the threads on the oven and mouthpiece became a bit gunky. This made it a little difficult to unscrew and remove the mouthpiece. So we recommend that you keep the oven clean so that you don’t get residue buildup and snap off the glass mouthpiece or something trying to remove it and access the oven. We were able to get at least a half-dozen sessions in before we noticed a hint of build-up. 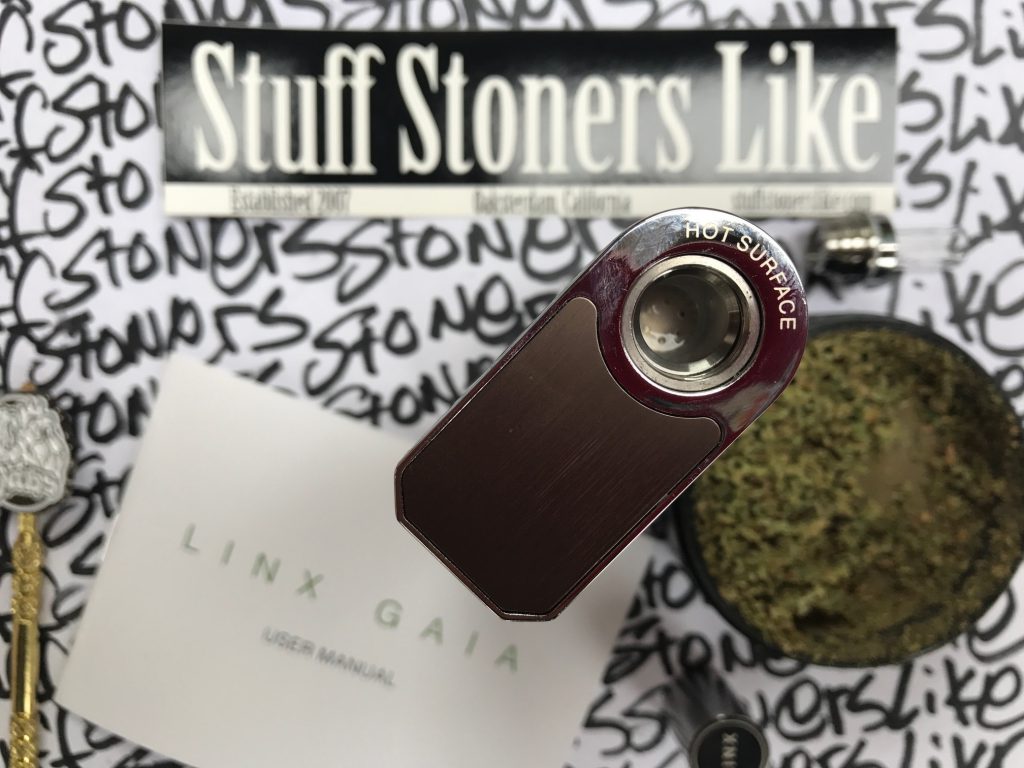 At 160 bucks we think the Gaia is a pretty decent score. It’s looks way stylish and it’s really easy to use. With just three big ol’ buttons—a power button and two temperature buttons marked with plus or minus it’s almost foolproof. We really dig the giant display and the fact that the vape doesn’t use any flashing, or blinking or colored lights to signify some preset temperature, setting or mode.

Plus it comes equipped with a unique quartz oven that’s right on the cutting edge of dry herb vape technology. And it delivers really consistently good-tasting hits. Plus it’s unique vapor path ensures cool vapor delivery—seemingly hit after hit. Another dope feature? You can use it while it’s charging. That’s ideal for vaping while using your computer.

Bottom line—the Linx Gaia is definitely comparable to the Pax 3 and other top brands. It’s sleek, sophisticated and simply fun to use. Each time we got near it we just had to pick it up and hit it. We certainly went through a lot of weed with this thing and dug each hit. So if you’re looking for a cost-effective, quality, dry herb vape that delivers consistently cool medium-sized clouds of tasty vapor you can’t go wrong with the Linx Gaia. For more information visit linxvapor.com.

Ever try the Linx Gaia vaporizer? What did ya think about it? Let us know your thoughts, questions and concerns about this thing in the comments section below.