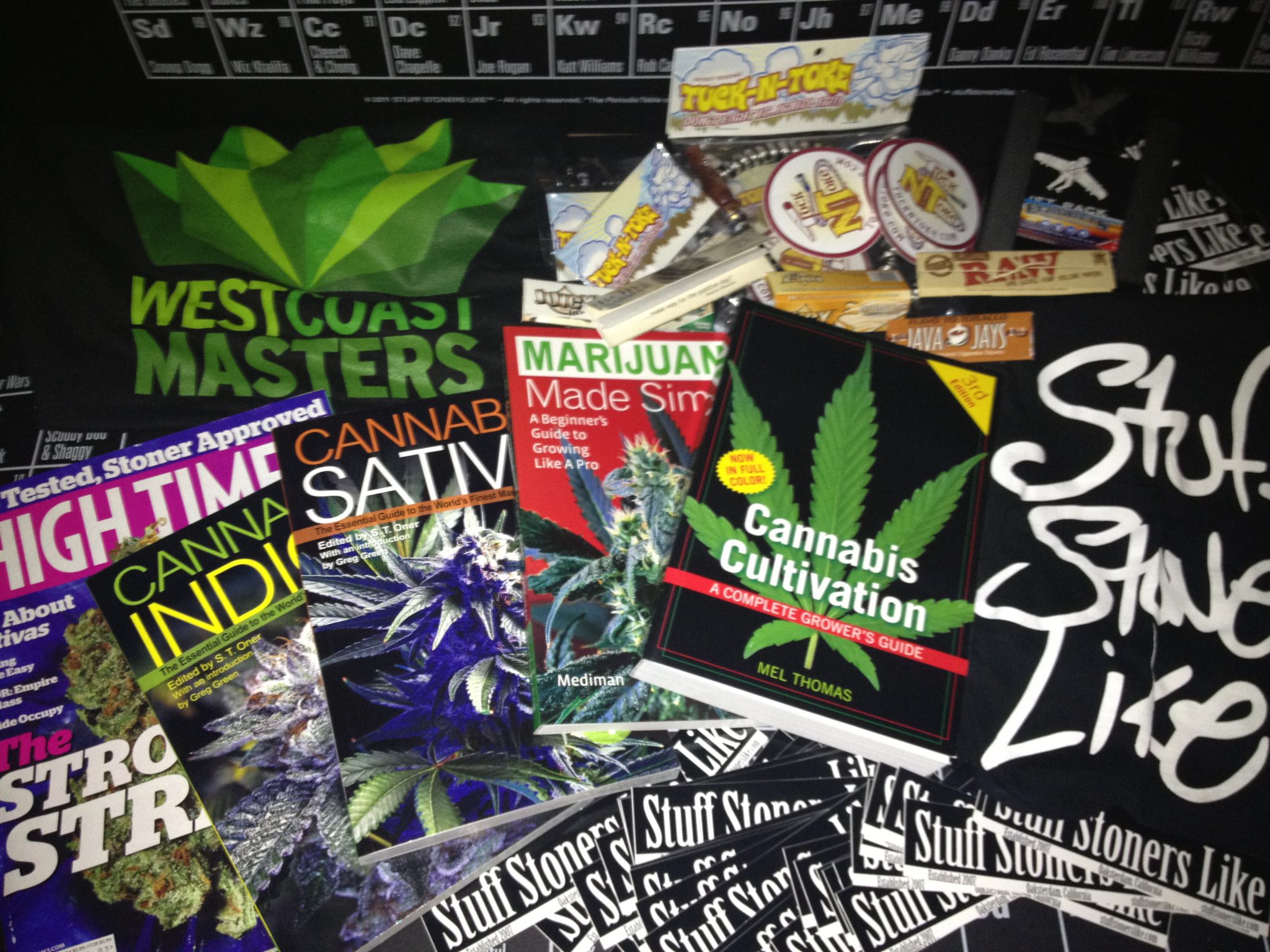 Ever since cannabis has become more mainstream in the last decade, we’ve been seeing a huge increase in weed subscription boxes. So much in fact, you could have a weed box for each day of the week if you so chose. But which weed box, or weed boxes, as the case may be, do you choose? And how do you pick a monthly cannabis box service.

First we should point out that some marijuana box companies include weed in their monthly weed gift box. The problem with a pot box like this is that while everybody would love a weed kit box filled with weed or concentrates each month not everybody lives in a cannabis friendly state. So for the purpose of this post we’re going to focus on the weed subscription box companies that can service the entire US. That’s because they send out a marijuana box each month minus the marijuana. Instead this type of weed box is filled with all sorts of stuff stoners like from paraphernalia to candy.

You can send a stoner care package to a friend each month or you could just send one to yourself. Anyhow here are the top 4 Weed Subscription Boxes that are Stuff Stoners Like: 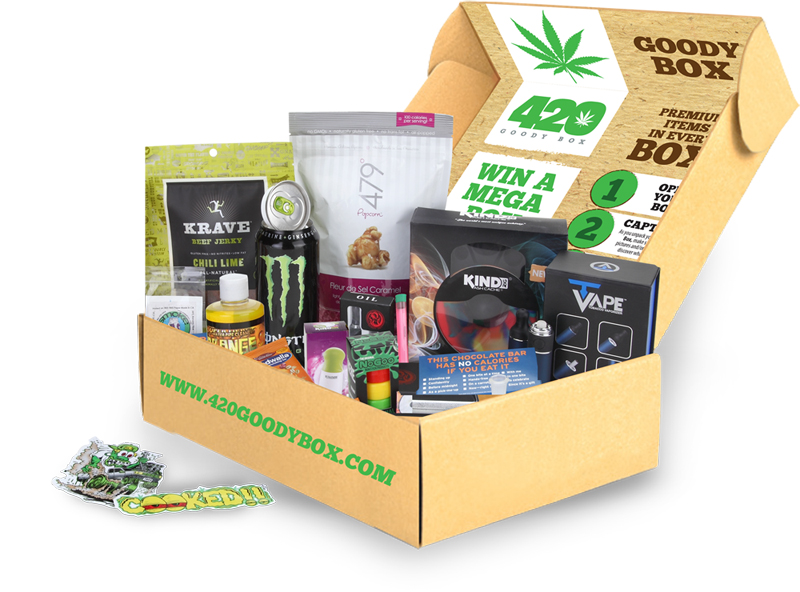 420 Goody Box
This 420 monthly box is billed as “A discovery box handcrafted for those that live the smokin’ lifestyle.” You can get signed up to this 420 box subscription service, hitting that loot box plan for about ten bucks a month, all the way up to the Top Shelf. A ticket to ride the top tier 420 monthly box  will run you about 80 bucks a month. But it includes some sort of super, high-quality, top shelf piece each and every month. That’s not a bad price for a 420 monthly box especially if you’re looking to build up your collection on the steady.

The loot box subscription tier for the 420box will get you the basic essentials. There is no glass included in this subscription tier. This is mainly for rollers and the spliffmode squad. If you want some glass each month, you’ll need to sign up for at least the Goody Box plan, which will cost you about $22 bucks a month. That’s actually a pretty good deal if you consider the goods inside tally up to anywhere between 45 and 85 dollars. If you choose a spot on the top shelf, they say those boxes are filled with between $150 to $250 worth of dope stoner shit each month. 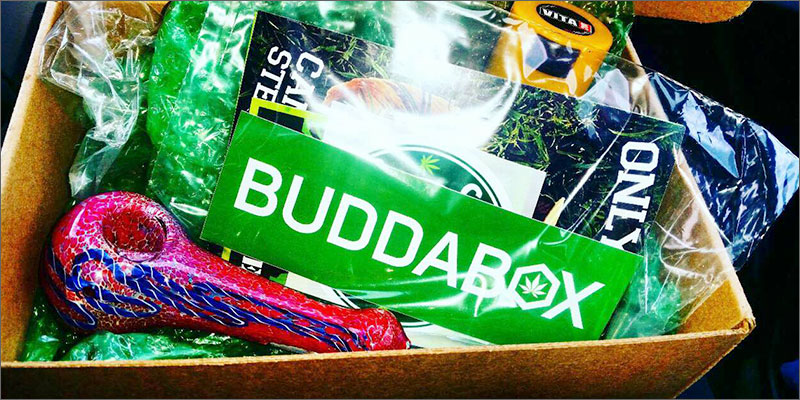 BuddaBox
This weed subscription box calls itself the world’s number 1 420 subscription box, and with praises from High Times, it’s easy to see why. BuddaBox let’s you not only sign up for a weed box subscription each month, but they also sell the stoner box individually. I also like how they have a flower and an extract side, depending on what you are into that month.

Subscriptions to this 420 box start at around $24 a month and go up to $65. The individual stoner gift boxes currently go for $29 for the leaf side and $65 for the dab side. These subscription boxes are stuffed with gear from 420 Science, Seedless, Raw, and Crop King Seeds, just to name a few brands.

Hemper
Inspired by the whole “To your door” craze that Amazon literally brought to everyone’s door, Hemper says it’s the premium monthly marijuana subscription box for smoking essentials. I like how Hemper let’s you choose the frequency of your box subscription. Maybe I want to sign up for the Glassentials box every three or six months, but I want the original box every month. Hemper lets you do that!

I also appreciate how they are doing collaborations with stoner personalities. People really pick up and latch onto a dope personality they like online. Having those people personally choose the gear that gets put in the box each month is huge, and not something I see any of the other 420 gift boxes or weed subscription boxes doing.

Dollar High Club
This weed subscription box club says they aren’t about the money. For smokers by smokers is how Dollar High Club CEO and Founder Harry puts it on their about page. This is also where he explains that they don’t really make money doing this monthly weed box thing. They do it, simply put, for the feels. That’s definitely something I can get down with, and an idea that is always stuff stoners like.

Harry and his Dollar High Club get to make sure people around the world have the proper tools they need to smoke some weed. They say as long as they can help be a part of changing the negative stigma that has shadowed us around for most, if not all of our lives, then they sleep just fine at night. Dollar High Club offers a box for as low as $3 a month, all the way to $30 a month. For the low cost plan, you can expect enough rolling gear to smoke about a joint a day for a whole month. The next plan up is $12 a month and includes seven to nine products that are curated by smoking experts. The top plan is called the El Primo, and if you kick down $30 a month you’ll not only get the essentials, but also a new piece of glass, and 10 to 15 cool smoking products. Not a bad idea if you are into trying out all the things.

Monthly vape box?
You know what’s missing in this space? A vape subscription box. Maybe there is one, but so far I’ve not found a dedicated vape box subscription box out there. Some do have 710 versions, but those often include things like oil rigs and torches and stuff—not necessarily stuff for peeps who use vape pens exclusively. If you know if a full-on monthly vape box let us know in the comments section below.

Have you ever subscribed to a monthly weed box? Which cannabis subscription box is your favorite? What would you put in the perfect weed care package? Let us know in the comments section below.

5 Responses to “Looking For A Weed Box? Here are 4 Dope Weed Subscription Boxes That Are Stuff Stoners Like”