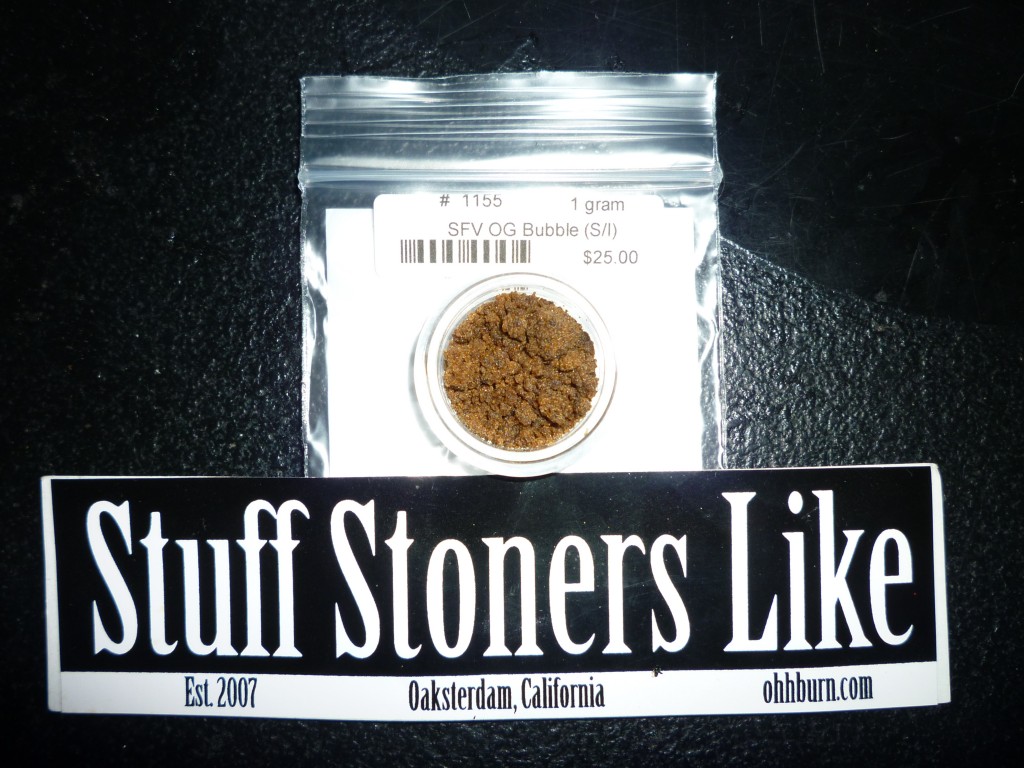 REVIEW BY: @XinckAlviso
Name: SFV OG Bubble (S/I)
Score: 8/10
From: Harborside Health Center in Oakland
Cannabinoids: 39.88% THC, 1.49% CBD
Type: (S/I) SFV OG Kush is a mostly Sativa dominant cut with minor Indica undertones.
Genetics: Some say SFV OG Kush is in fact a S1(Self Seeded) cut of the ORkid’s Ghost OG Kush. It is very similar to the ORkid cut with sturdier and healthier plants. It is also to said receive its name from the San Fernando Valley in SoCal, where the strain is very popular in the area and many say it is where the strain originated and rose to cannabis fame. One interesting note is that the High Times San Francisco Medical Cannabis Cup 2010 and 2011 2nd place Indica, The True OG, is said to be an SFV OG Kush cut and phenotype that was isolated and stabilized over years in order to create the new strain. 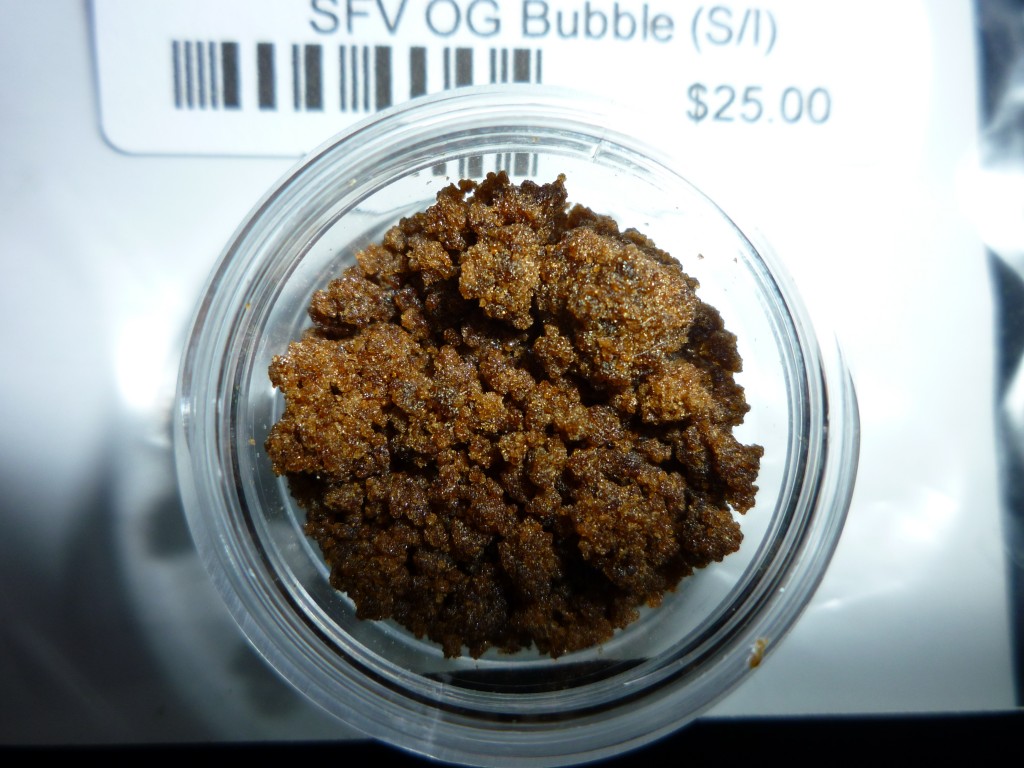 Price: SFV OG Kush is regarded by most to be top shelf quality medicine, so I was happy to see some SFV OG Bubble at only $25 a gram. This is only the 2nd time I’ve received the strain in concentrate form, both times I chose the hash due to the strain’s consistent potency regardless of where I’ve purchased the hash from. This is a very fairly priced bubble hash.
Appearance: I base my opinion on good and bad bubble hash depending on how “melty” the hash looks. Generally speaking, the wetter the hash looks the better. If you look at the SFV OG Bubble closely it almost looks juicy, indicating that there isn’t too much plant material in there and that you’re going to get a nice bubbly melt when the hash is exposed to heat one way or another. The SFV OG Bubble has a nice soft brown and amber color to it, and as you can tell by the pictures it has a very nice sheen to it indicating that this stuff wants to bubble up and melt a bit!
Smell: A sweet and basic hashy smell that’s followed with the distinctly extra sweet piney smell that you only find with SFV OG and a few select other Kushes.
Flavor: Like I’ve been saying, this one is definitely a flavor savor. I first tried the hash with my hash bowl and glass wand in my Hi-Si glass bong. You can hear a nice bubbly/melty sound when the heated glass wand first touches the bubble hash.  SFV is a very sweet, particularly extra lemony piney flavored strain. The flavor is there in this batch of concentrate, but not quite as strong as what I’m used to when medicating with this particular strain.  The flavor is similar in other Kush strains (Like Tahoe OG or Larry OG), but nothing specifically matches its unique taste. If you like the flavor of OG Kush, SFV is that awesome piney flavor made into CANDY! 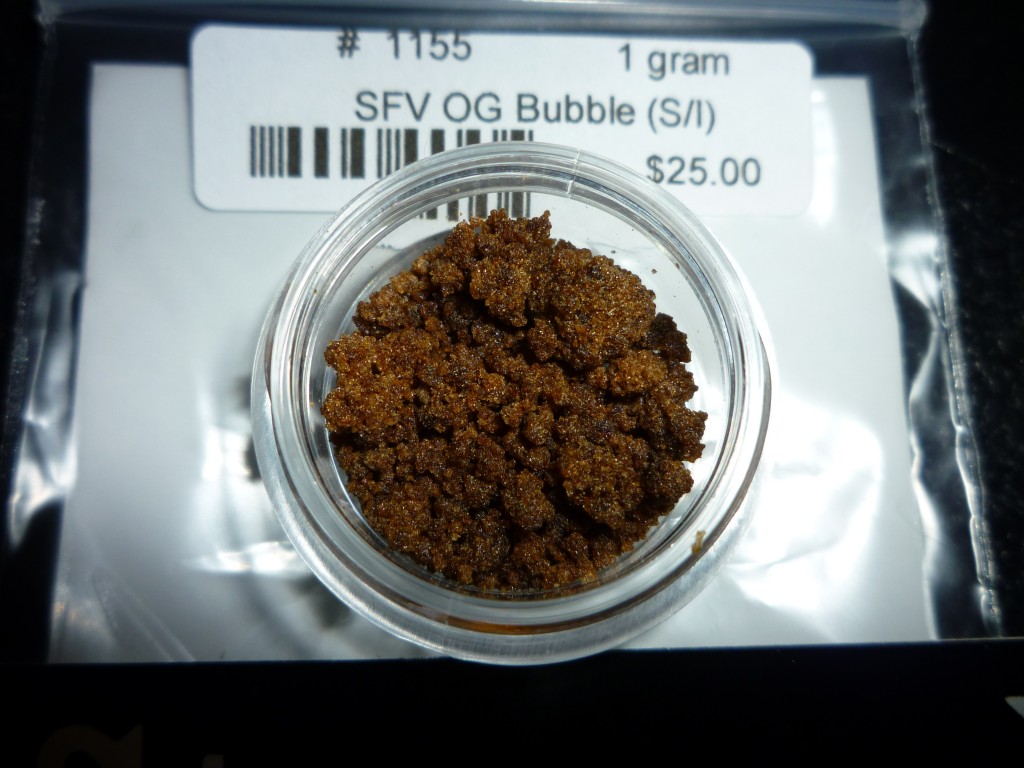 High: To the dome! A straight head rush is what you can expect from this strain, whether in concentrate form or flower. The hash hits had me feeling’ the high right at my forehead and right between and behind my eyes, relieving a headache that I was suffering from at the time. It’ll put you in a great mood and leave your head feeling like it’s up in the Kush clouds! It gives you a distinct uplifting feeling that’ll put a big smile in your face.
Buzz Length: Definitely a long laster. I took a few hits off of one hash bowl and it lasted me 2 hours plus. I can’t say enough how consistent this strain is with potency and effectiveness.
Medical Uses: This strain is great for depression, anxiety, anger management, mood enhancer, appetite inducer (you’ll get a nice case of the munchies). It’s is a great daytime med that will put you in a great mood to take on your day with a new found passion for your daily routine!

This is a fine concentrate made from some top shelf flower, while there may be other hashes that melt a little better or are priced a little better, not many will come close to the effects and potency of the SFV OG Bubble hash. If you ever visit Harborside Oakland, or any other dispensary, and they have SFV OG Kush, treat yo’ self and snag some up right away! Because it won’t be there for long and you will definitely regret missing out on this one of a kind, exceptional med!