Remember how when Pete Townshend would get all pissed-off at his Stratocaster and destroy it all over his amplifier and you’d say to yourself, “Shit, Pete, man…why don’t you just give meeee that fucking geetar, dude?” Well, that’s exactly how stoners feel every single time they see some footage of a helicopter lifting up a bail of freshly murdered marijuana or see weed being burned alive or slashed in half with a machete. It’s some fucked up shit to show to a stoner. 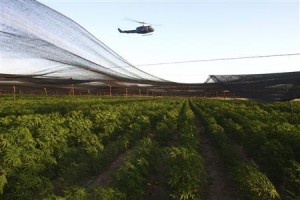 So today, all these cops in Baja California uncovered this ginormous 300-acre outdoor weed grow about 200 miles south of Tijuana. And, according to the reporter-dudes at Reuters, General Alfonso Duarte said Mexican soldiers discovered the plantation while on patrol. He added that all the doomed plants would have yielded 120 tonnes and were worth about $160 million. “This is the biggest marijuana plantation we have found in the country,” Duarte said and then added that the plants would all be destroyed.

Yep, all that marijuana is going to be destroyed…just like a Pete Townsh…okay, you get the idea. Oh yeah…did we mention that Mexico’s largest outdoor weed grow ever…was hidden beneath some inconspicuous black netting? C’mon, dude, anyone who’s ever seen Cheech and Chong’s Nice Dreams will tell you that you’re supposed to hide your massive outdoor weed grow directly under a tarp painted with a fuckin’ swimming pool on the top. Shit, man, no wonder those dudes got caught.

Check out the pics from Reuters, below, after you watch that Cheech and Chong swimming pool tarp scene in some fuckin’ language we’re too stoned to identify. 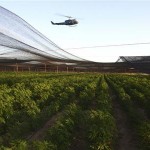 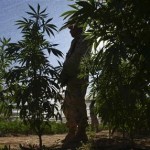 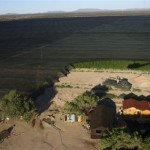