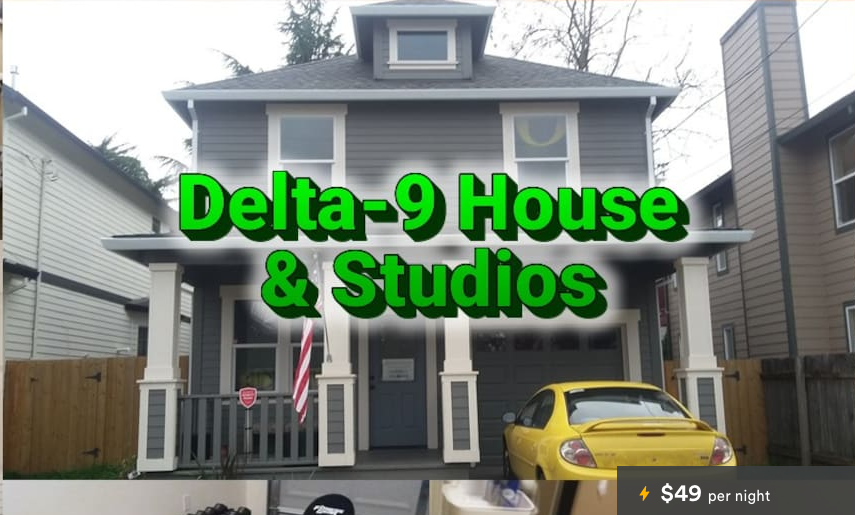 Recently I had the pleasure of staying a couple of days at the Delta-9 House and Studios owned and operated by the popular marijuana activist and High Times scribe Russ Belville. The house is located right in the remarkably rainy, cannabis loving city of Portland Oregon. I can’t say that I’ve ever reviewed something like this before, but rest assured, I have stayed in, and hot boxed the fuck out of more hotels, shitty low rent hostels, and even a teepee out in beautiful Kenny Lake Alaska. It’s safe to say I know a dope experience when I experience one, and this is definitely a must see stop that is going to soon be at the top of every stoner’s bucket list. It’s on mine, and now it’s checked off.

Plus, did I mention it’s in Portland? Where else in America, let alone the rest of the world right now are you going to experience an awesome hip hop show, hang out and sesh with the locals at the NW Cannabis Club, then come home to your relaxing Indica Room (or Sativa Room) to end the day with one of the most fulfilling home cooked meals you’ve probably had since you went and visited your parents last.

Ever since I first went to Amsterdam when I was younger and got a taste of what the real weed life could be, it’s always been a dream to be able to sit down and have a couple of dabs or some herb, before embarking on entree after entree of fantastic food to fill you up before retiring to the room for a cozy snooze. I’m telling you, if I didn’t know any better, I would say this was my Nirvana.

As I said in the intro, I haven’t been to any other weed b&b’s, but after experiencing Russ Belville’s Delta-9 House, I feel like they have set the bar all future cannabis friendly airbnb’s should strive for. I feel like I’m gushing over this, and maybe I am. I don’t think you fully comprehend the gravity of what’s happening over here, especially if you live in a prohibitionist state. Everything is right out of a stoners wet dream. Ok, maybe that’s going a bit far, but I don’t think so. I just happen to like it extra because of the whole recording studio aspect of it. That hits me right in my nerd feels. So let’s talk about the hosts with the bowls to roast. 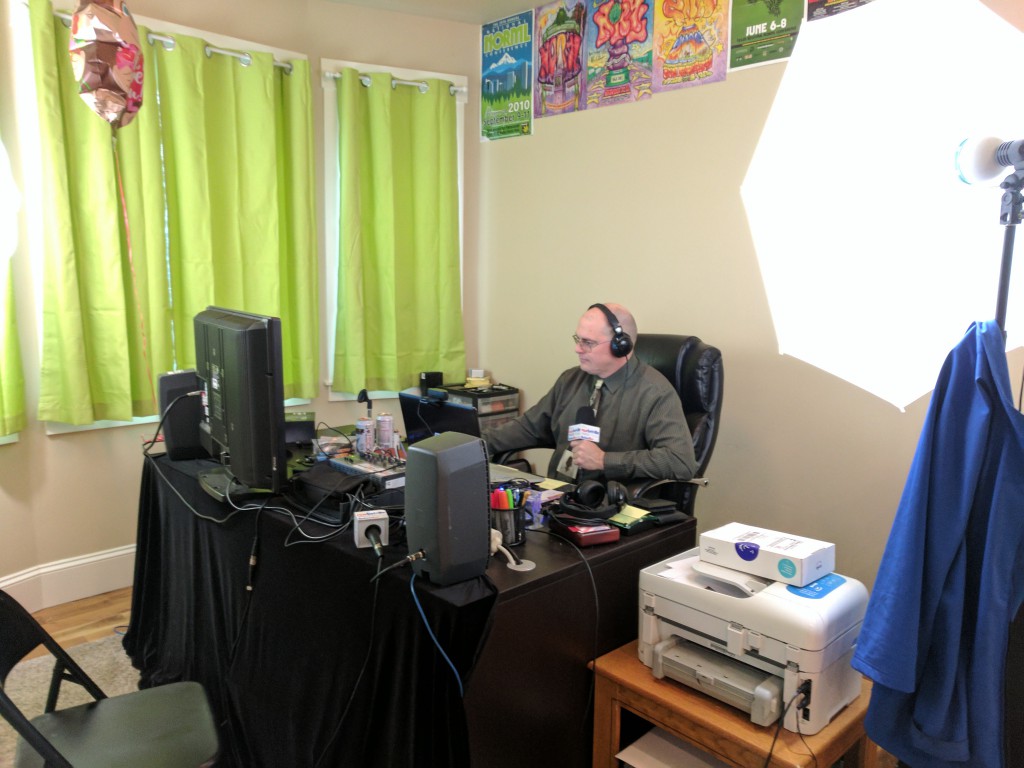 I personally don’t know who better to make cannabis consumers feel right at home in the city of Portland than Russ Belville and Lori Duckworth. If those names sound familiar, and you consider yourself a stoner, they should. Before you watch the video for my Delta-9 House & Studios review, let me give you some background on who these gracious ganja guru activists are.

Lori Duckworth has been involved in the industry since before you younger adults knew what a cannabis industry was or could be. That also means she knows how unstable it is, especially for those bold early adopters helping patients attain their medicine back when cannabis dispensary storefronts were frowned upon. Remember the early days of medical marijuana only? I remember. I won’t reiterate her painful story, but I highly recommend reading Russ Belville’s article on it from July 2014. Oddly enough, it was called Operation Storefront.

Which brings us to Mr. Belville. I’ve known Russ Belville since back in his early 420 radio days when he was kind enough to air the Hot Box podcast. He’s always been one of those people I thought was doing some real cool shit. Living the dream so to speak. His booming yet calming on air voice can be heard all across the internet on multiple platforms all day every day. He’s produced enough shows that some of us could literally listen to Russ explain the intricacies of the prohibitionist mind state for the rest of our lives. The man is prolific in his writing as well as in his activism. He made the podcasting dream a lot of us had early on, a reality, and now does his show out of the comfort of the Delta-9 House & Studios. He says he’s definitely living the dream. His work commute consists of a brief walk down the stairs. Run out of weed or dabs? Not likely, but in the odd event that does happen, there is a cannabis shop also within walking distance. Along with a convenience store, a strip club, and a steak house. Talk about location. Never let it be said that Portland doesn’t aim to please. Not to mention some of the people who frequent the Delta-9 like to leave the house presents for the travelers and hosts to enjoy.

Being able to broadcast out of, and AirBnB the open Delta-9 house rooms not only provides a smart business model, but it also brings in a fun, story filled group of new people. If you are into people watching and hearing fun stories as much as I am, hanging out for a day or two at the Delta-9 House will not disappoint. 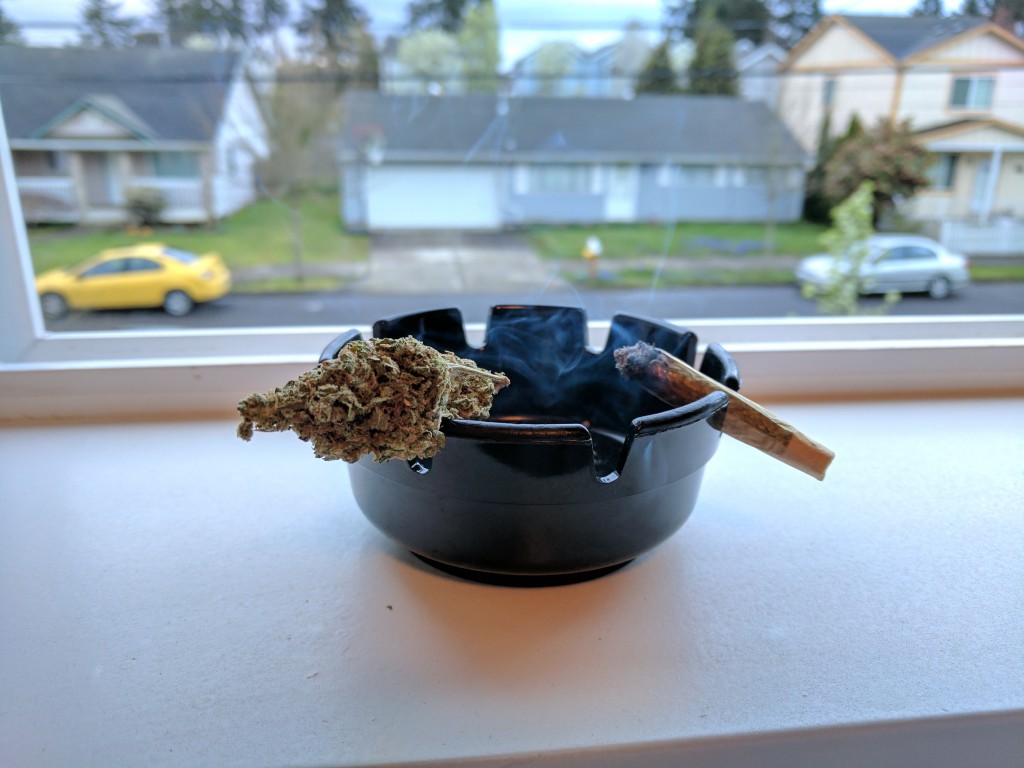 If you arrive between the hours of 3pm and 5pm, make sure not to ring the doorbell. That’s usually the time Russ is recording the Marijuana Agenda. Russ is really good about communicating via sms and the AirBnB messaging system, so you’ll be sure to keep in touch and find your way should you get lost in the vast expanse of odd wavy cityscape that is Portland.

Checking in is as easy as using AirBnB, as is driving to the destination. Depending on where you come from that may not seem like a big deal, but driving in towns like Portland and Seattle can sometimes be a nightmare, especially if you plan on parking for the night or aren’t used to driving on roads with more than two lanes. Fear not, for the great god of turn by turn navigation, Google, will take you directly there, no qualms. As I said, the check in odds and ends are all neatly handled by AirBnB, so if you have ever used the service, you’ll know it’s as easy as it gets. So what’s the deal with putting your smokey pledge down at the Delta-9? Everyone who comes here is encouraged to partake in the goodness that is the cannabis plant teacher. You are encouraged to bring your own cannabis material to smoke, but Russ says that people are encouraged to help themselves to whatever is out on the table. After all, sharing is caring.

That being said, I definitely recommend popping open a weedmaps type app and taking a look at what the surrounding area has to offer for recreational and medical cannabis warez. Portland is a huge epicenter for stoner culture. Everyone should immerse themselves in it every now and again if you don’t live the life. It’s unfortunate that the rules and regulations such as they are, prevent the Delta-9 house from being able to incorporate the sales of cannabis and cannabis infused products into their business model. It would make sense that the cannabis friendly place you are staying at for a night or two would also be able to sell you the weed and dabs you might want to smoke and dab while there. Then again, no one ever said the rules and regulations had to make sense.