You know when Pete Townshend would get all mad at his Rickenbacker and smash it into a million little pieces all over the stage and you’d say to yourself, “Shit, Pete, man…why don’t you just give that fucking beautiful geetar to me?” Well, that’s how stoners feel every time they see some footage of a helicopter lifting up a bail of freshly murdered marijuana or see weed being burned alive or slashed in half with Chancho’s mom’s lucky machete. It’s just so fucking terribly tragic. Why not force us to sit and watch Pineapple Express or a movie that Madonna starred in or something…because that’s just some fucked up shit to show to a stoner. Really, what sadistic motherfucker likes to see photos or footage of innocent plants being massacred…especially marijuana plants? Seriously, DEA dudes, what did those adorable little harmless plants do to you guys? Don’t you know that plants have feelings? And, because marijuana wants to help humans so much, marijuana has the most feelings of any plant in the whole world. It’s true. Stoners know it. And for stoners…witnessing the footage or the photographs of such senseless slaughter is heart-wrenching. Why…oh…why do you have to recklessly destroy life with such pleasure, anti-marijuana dudes? 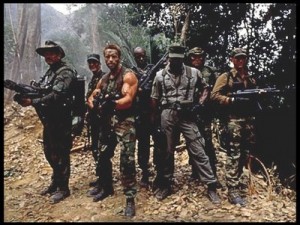 Maybe it is kinda funny. Look at these marijuana eradication dudes…they look just like the guys who hunted that fishy dreadlocked Admaral Akbar looking motherfuker in all those Predator movies, jumping out of military-style helicopters and shit…carrying weapons and wearing camouflage. Wait? Wasn’t one of those dudes saying that “it’s time for debate” on the issue of legalizing marijuana or something? Eh, maybe we were just dreaming. Anyhow, what’s the need for such an arsenal gentlemen, it’s not like those big bad marijuana plants are trying to exterminate you or anything. Wait? Are you guys afraid of a bunch of gardeners or something?

Almost as disturbing as the slaughter of helpless innocent female marijuana plants is the attitude of the reporters and agents on these erradication raids. Have you ever seen ’em? Notice how giddy they appear. It’s not because they think they’re doing the world a favor by destroying it’s medicine or winning the war on drugs or anything. You’d be smiling and all happy as hell too if you were filling an entire helicopter full of free weed to smoke!