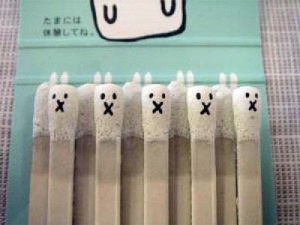 Matches are for suckers or for people who don’t have lighters. Why? Because they suck..that’s why. Have you ever tried to spark up a fat bowl with a match? Oh you did…did you? Well, how many times did those matches break before you got in the car and drove to 7-11 to buy a fucking lighter?

Matches, what a joke. You might as well go rub two sticks together or something because matches are just about useless. The wind blows, they go out. The wind changes direction, they go out, you breathe too heavy, they go out. You’re girlfriend farts and well, either you all explode into a million li’l charred stinky bits or the match goes out. Yep, useless little things those matches are. They’re manipulative too…make you think they’re gonna work, make ya think they’re going to help you get high, but nope. All they do is burn your fingers. Matches might as well be prohibitionist because they’re not helping anyone get high.

You ever drop a match in your lap? Of course, who hasn’t? One second you’re lighting a joint with a match,  you’ve got a cheeseburger and the steering wheel in the other hand, hit a bump, and now your crotch is on fire.  Well, that shit doesn’t happen when you drop a lighter.

You pull too hard on a bong rip and out goes that li’l sadistic match. Now you’ve gotta put that hot li’l fucker down and pull off  another. Close the god damn flap find the li’l sandpaper part and try it all over again. All the while you’re missing the A-Team on TV and you’re not even stoned yet!

You know the colloquialism that everyone tells kids, “Don’t play with matches”? You know why folks tell ’em that? Well, it’s reverse psychology, man. If you tell those li’l fuckers not to play with lighters, they’ll actually accomplish starting a fire and burn the fucking house down.