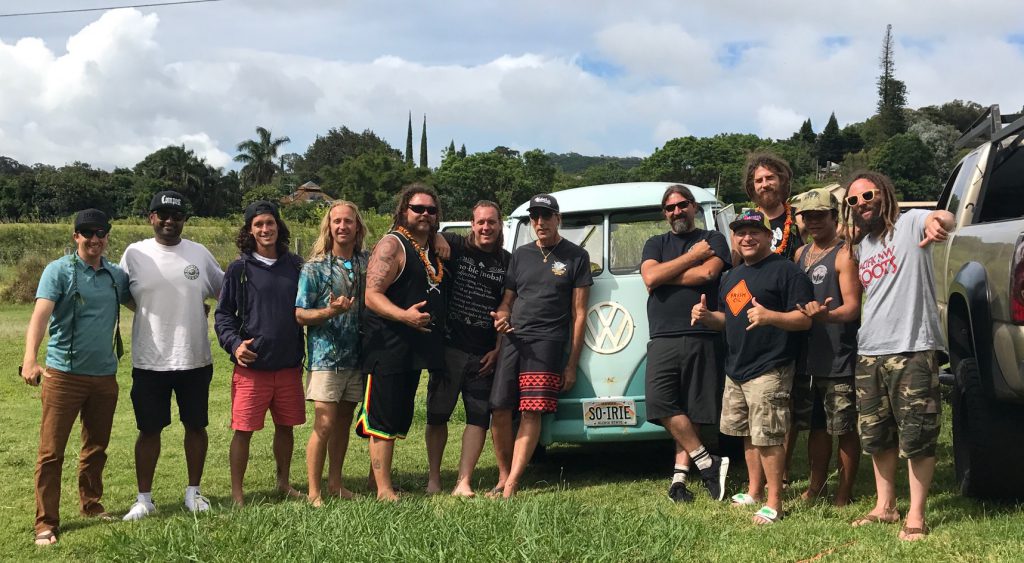 Thirty-two of best marijuana growers in the state of Hawaii assembled on Maui a couple weeks ago. Along with big dreams and big buds they made their way to a picturesque pasture—3000 feet up the slope of Mt. Haleakala where Jimi Hendrix once rocked the hillside. They all paid their dues, proudly donated two ounces of herb and graciously awaited for it and their abilities to be judged.

We’re talking about the All Hawaii Invitational here—the second installment of the annual herb content that was organized and run by Maui’s own Greyskull the Grower a guitar-playing, bus-driving monster gardener that’s loved by the state’s weed community. Grey Skull’s vision, the All Hawaii Invitational aka AHI, is Hawaii’s version of the original Harvest Festivals from back in the 70’s happening in California to judge each year’s most outstanding crop. Those festivals spread in popularity in and out of California and became gatherings like the Emerald Cup and of course the High Times Cannabis Cups that were popular throughout Amsterdam and now all across the states.

Unfortunately these cannabis contents have morphed into a celebration of bikini girls, blow torches and debauchery—straying so far from their original intent—celebrating the year’s weed harvest—that they’ve become a parody of themselves. However Hawaii is holding true to tradition. Their pot competition was an intimate affair—no loud product pushers tossing out schwag, no zombied-out dab kids stumbling around, no near nakedness—just good people, good smoke and good vibes. 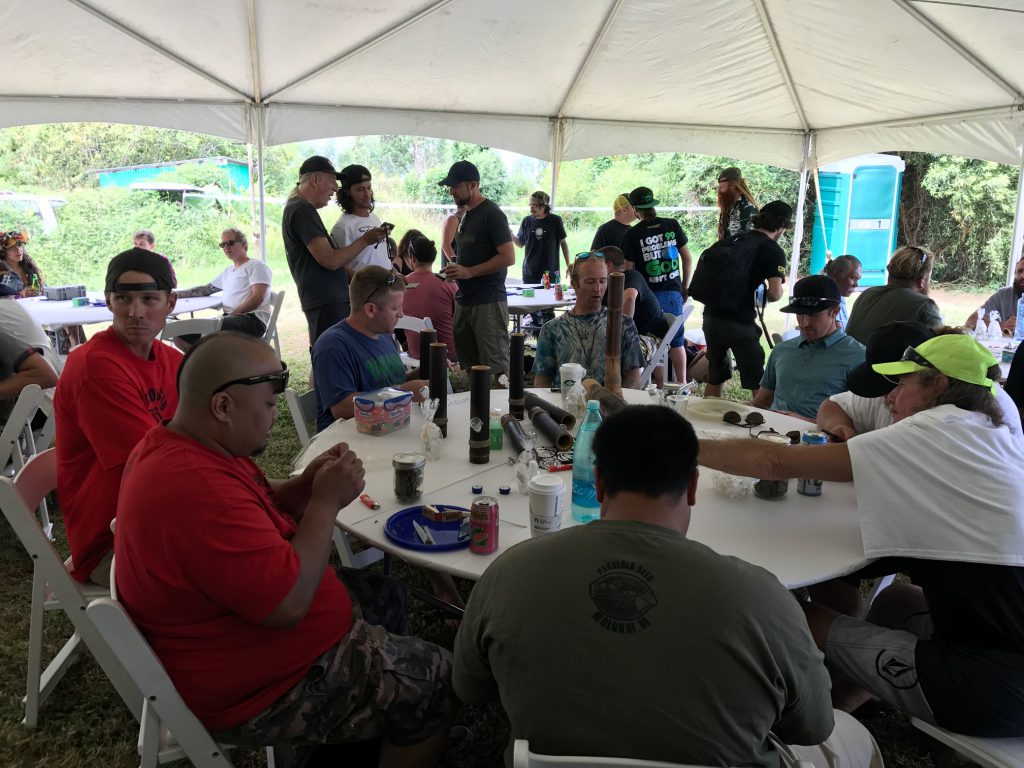 Anyhow the AHI is a head-to-head style competition. Two jars of weed are delivered to each of the ten tables seating about ten judges each—two of those judges were growers who had entered the contest themselves. The organizers of the event worked it out so that not a single judge was able to evaluate his own weed. One jar was chosen winner and moved on to the next round. In about six hours a winner was crowned.

Not only did we get to roll and smoke more than 40 joints we were treated to some tasty grinds—everything from chicken to rice to cakes—and killer music, we met some amazing people from Hawaii including Will of Sticky Fingers seeds, Jason the original glass outlaw who started Jerome Baker Glass and Johnny NoGoo who runs the industries’ largest silicone pipe and container company, plus other mainlanders like Oregon’s Professor P of Dynasty Genetics who was there to offer expert judgement. Hawaii has its share of concentrates. A few growers brought dabs to sample—everything from BHO, to rosin to the finest full melt hash. Get this there was even a cat there who was pressing each entry into rosin table-side. He has a car battery, rosin press—everything to sample the sweet juices of all the flowers that were entered.

Many of the entries were diesel and sour-flavored. We came across one strain with a nice grapey flavor and an unmistakeable tangie, but fuel flavor seemed to rule the event here on Maui. Who won? Actually one of the strains that wasn’t overtly gas-flavored called VallyxHP13. It was grown by Uncle Jimmy from the island of Maui. His herb burned clean and tasted amazing—definitely deserving of first place. Runner up went to Uncle James and his OneStar strain and rounding out third and fourth were HiStandard808/ParadiseGenetics with their Wedding Cake and last year’s AHI winner JoeyGreen808 with his FirePiexHP13. 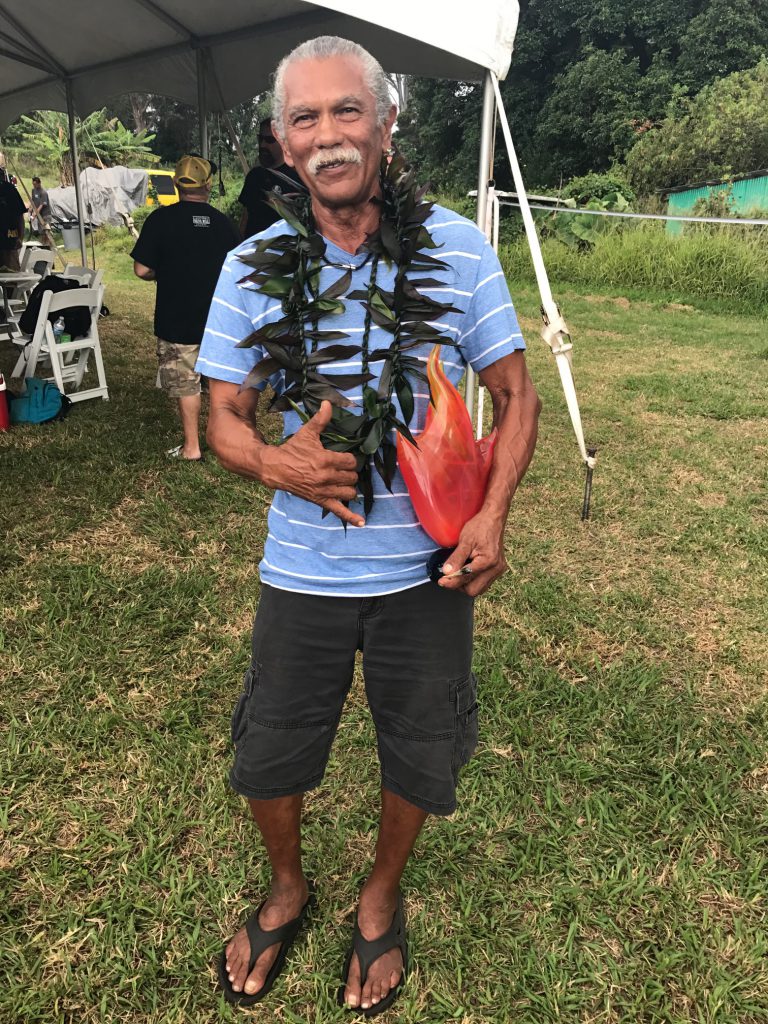 Big danks to Grey Skull the Grower for allowing us to judge and sample so many tasty strains, Phil for all the photos in this post as well as Professor P of Dynasty Genetics for having our backs when rolling joints became a chore. And lastly big ups to Will of Sticky Finger’s seeds for showing us a great time and even better smoke while on Maui. See ya’ll next year.