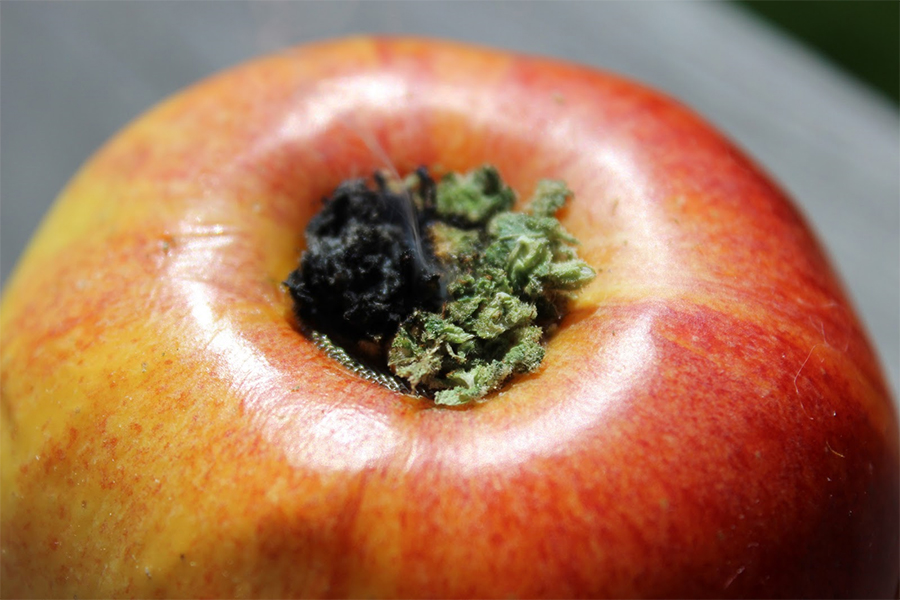 How to Make an Apple Pipe

Nothing’s as classic as the apple pipe. Well maybe the honey bear bong, but still. You know it seems like everybody who has weed but no pipe has an apple lying around. That’s why the apple pipe, sometimes mistakenly referred to as an apple bong, is so universal and so stuff stoners like. Plus they’re cheap to make, portable and ever so slightly (and all-naturally) scent your bud. So hey, if you want to learn how to make and apple pipe stay tuned, we’ve got a couple great versions for ya—the classic apple pipe and an updated version that leaves you with a snack.

How to Make a Pipe from an Apple —Classic Version
Let’s start off by making a classic apple pipe. It doesn’t matter what kind of apple you use—Granny Smith, those big fucking red ones that taste like shit or those hella sour little green ones—as long as it’s firm and fresh. Old squishy apples don’t make for good apple pipes, man. You’re going to need an apple with some structural integrity if you want to use it to get stoned. When scouring for apples, while you’re at it, make sure their ain’t any worms in your apple, nobody wants to smoke a worm. You’ll also need a screwdriver, a pen, ice pick—you know something to hollow out your apple—preferably something relatively clean. Now proceed like this trying not to shank yourself of course:

Pack your weed in the top hole and inhale through the side hole. Don’t pull too hard, dude, or you’ll pull the weed into the apple—no bueno. If you went ahead and made an apple pipe with a carb just make sure you cover that hole with your finger as you inhale—remove your finger when you’re ready to take the smoke into your lungs.

There’s no need for tin foil or little metal screens for this apple pipe—you don’t want to heat that shit up and inhale those fumes anyhow. Keep it all natural, don’t inhale too hard—it’s an apple pipe, not an apple bong and you’ll be fine.

How to make an Apple Pipe —New School Version
Okay here’s a new twist on how to make an apple pipe. For this new school version of the classic apple pipe you’ll need an apple of course as well as a knife and a skewer or small screwdriver. You’re basically going to cut off a side of the apple, cut it into the shape of a pipe, poke a hole, make a bowl and you’re done. Confused? Don’t worry, man—we’ll break it down for ya:

Again there’s no need for foil or a screen or anything for use with this new school apple bowl—just don’t inhale too hard and you’ll be fine. Bonus? You’ve still got some apple left to snack on.

So that’s it, man. We covered the apple bowl basics. You wanted to learn how to make a pipe out of an apple and we delivered—not just one cool apple pipe, but two. One thing though, you stoner, don’t eat the apple pipe once it’s done. That’s just nasty. Toss that shit in the compost pile or the woods or something, man and order some Chinese Take-out or something when the munchies hit.