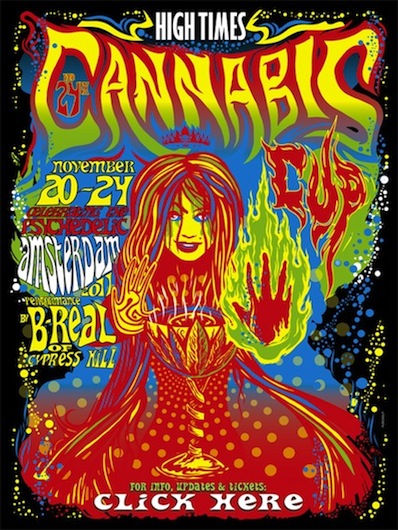 Despite all the conservative rumblings you’ve heard from the dudes running Holland, so far tourists can still smoke as much high-potency weed as they want while in Amsterdam. So that means High Times’ 24th Annual Cannabis Cup will be going off November 20-24, 2011.

This year’s epic herb bash is hosted and headlined by B-Real and Cypress Hill and will feature the magical weed-growing prowess of Arjan from The Greenhouse, Soma from Soma Seeds, Sissy and Derry from Barney’s, Don and Aaron from DNA, Adam from T.H.Seeds, Mila from The Pollinator, Big Buddha, and Swerve from Cali Connection. Of course the HIGH TIMES grow dudes Danny Danko (who by the way recently launched a KILLER weed podcast) and Nico Escondido will be on hand to offer some grow advice.

Our very own local girl, Debby Goldsberry of Berkeley, CA will be honored as the mag’s 2011 Freedom Fighter of the Year. And, according to High Times “to go along with our special psychedelic theme of this year’s Cup, Johnny Griggs of The Brotherhood of Eternal Love will be inducted into the Counterculture Hall of Fame”.

All that and the world’s best marijuana strains will be available to smoke-up during the daily Cannabis Cup Expo or at participating coffeeshops. It’s your chance to get STONED and cast your vote on the Cup’s best sativa, indica, and best of show!

Who wants to be a STONED STUFF STONERS LIKE Correspondent? All you gotta do is purty much show up to this thing, be STONED and you got the job, dude. Email us at stuffstonerslike@yahoo.com if you’ll be at this year’s cup and put “CANNABIS CUP CORRESPONDENT” in the subject line.