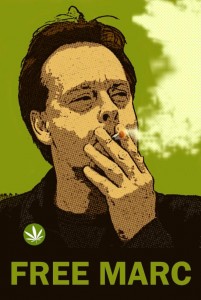 Self-proclaimed “Great Canadian”, marijuana activist and hero, president of the B.C. Marijuana Party, and Vancouver Canucks fan, Marc Emery, turned himself in this morning for extradition to the United States and a five year prison sentence for selling marijuana seeds over the internet to Americans from Canada. Justice Minister Rob Nicholson signed the extradition order this morning. Emery has been out on bail since last fall while Nicholson considered going through with sending Emery, who’s been eligible for extradition since early January, to the US. And, in keeping pace with history, the Canadian government has never refused an American request for extradition.

“I think of myself as a great Canadian – I’ve worked my whole life for individual freedom in this country, I’ve never asked for anything in return,” Emery said outside B.C. Supreme Court in downtown Vancouver, this morning.

“I am absolutely devstated that this Conservative government has opted to send my husband, a Canadian citizen, to the United States for a ‘crime’ that amounts to a $200 dollar fine in Canada,” said Jodie Emery. “This case is about silencing my Husband for his marijuana activism. This Conservative government has declared a culture war in Canada and my husband is it’s latest victim.” Emery, along with two of his Cannabis Culture magazine employees were originally charged with conspiracy to manufacture and distribute marijuana and money laundering.

Emery ran his magazine, seed and head shop businesses openly and transparently, declaring all of his income and paying all required taxes. The government of Canada received about $378,000 generated from Emery’s businesses and the provincial government of British Columbia has received about $200,000. Every Member of Parliament in Canada, all 305, had a free subscription to Cannabis Culture magazine, which had Emery’s seed catalog in every issue. Nobody ever complained…until Emery embarrassed the Bush administration by speaking out against the failing War on Drugs and how it was affecting Canadians. As a result, American prosecutors were outraged and claimed Emery was the largest marijuana producer in the history of the U.S. criminal justice system. They claim he sold about four million marijuana seeds and that 75% of those seeds went to the United States.

At first, the penalties facing Emery and his employee’s  were staggering. Emery looked at life imprisonment and under Drug Kingpin legislation he could be executed…as selling over 60,000 seeds qualified him for the death penalty in the United States! Charges were dropped against the two employees as part of a plea agreement; Emery would spend 5 years in a US prison for selling seeds from his desk. 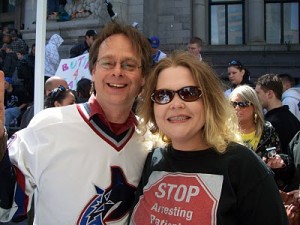 As a direct result of Mark Emery, Canada’s opinion of weed has permanently been changed. When he began, eleven years ago, there was no marijuana movement in Canada. High Times magazine was ILLEGAL in Canada (section 462.2 of the Criminal Code provided up to 6 months in jail, and/or up to a $100,000 fine for distributing books and any printed matter about marijuana or any illicit drug) and so were videos, pipes, bongs, everything and anything about marijuana was illegal in Canada.