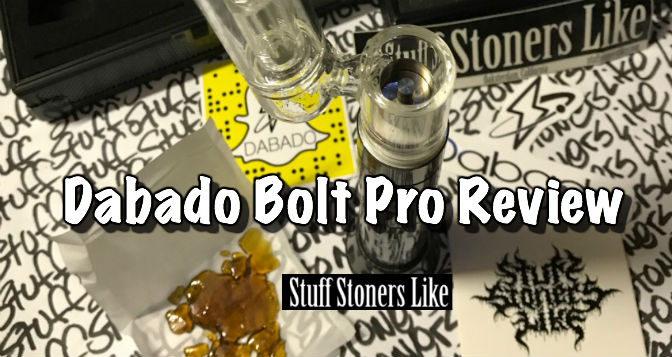 The Dabado Bolt Pro is definitely stuff stoners like. If you’re tired of breaking out the blow torch or don’t want to pay a ton of money for a fancy-schmancy portable e-rig we totally recommend this the Dabado Bolt Pro. It’s slightly larger and a lot more powerful than the original Dabado Bolt vaporizer that came out sometime last year. Our reviewer extraordinaire Mat Lee tested it out for us last year and really dug it. So when the new model arrived we were stoked to test it out.

This thing looks so awesome. Like a rocket ship or something. We got the titanium version that was black with some cool silver and white accents. Super futuristic looking.  The alpine white version was super sick too. It totally looked like a dab rig that some stoner Stormtrooper from Star Wars would like use in the workplace bathroom on the death star. It’s bone white and accentuated with some really cool black graphics. It’s heavy enough so that it feels sturdy in your hand or sitting on your tabletop yet it doesn’t feel weighted-down. Plus it’s completely portable. Take it to the beach, the campground or the planet Tatooine and you’ll be highly stoned in no time. Anyhow we were really impressed with the way the new Dabado Bolt Pro looks and felt—definitely exudes quality and style.

The new Dabado Bolt Pro comes with a set of the pro XL nails. In the super cool-looking protective carrying case you find a quartz, ceramic and titanium nail. The heating element goes up into each nail giving you a nice hot surface to hit with your blog of concentrate. Plus each nail features a really deep dish. You could almost fit a fucking Chicago style deep dish pizza in ones of these things. And with the Dabado Bolt Pro’s 18650 battery you could pretty much cook a deep-dish pizza on ones of these things too. The maximum temperature of the Dabado Bolt Pro, which has two individual settings, clocks in a around 850F. That’s way more than enough power to allow for thick, fat dab clouds.

The Dabado Bolt Pro kit also came the standard stuff of course like a usb charger and a few extra washers and grommets. It also comes with standard Dabado one year warranty. Oh and it also comes with a cool dab tool and a magnetic carb cap—a really cool feature actually. 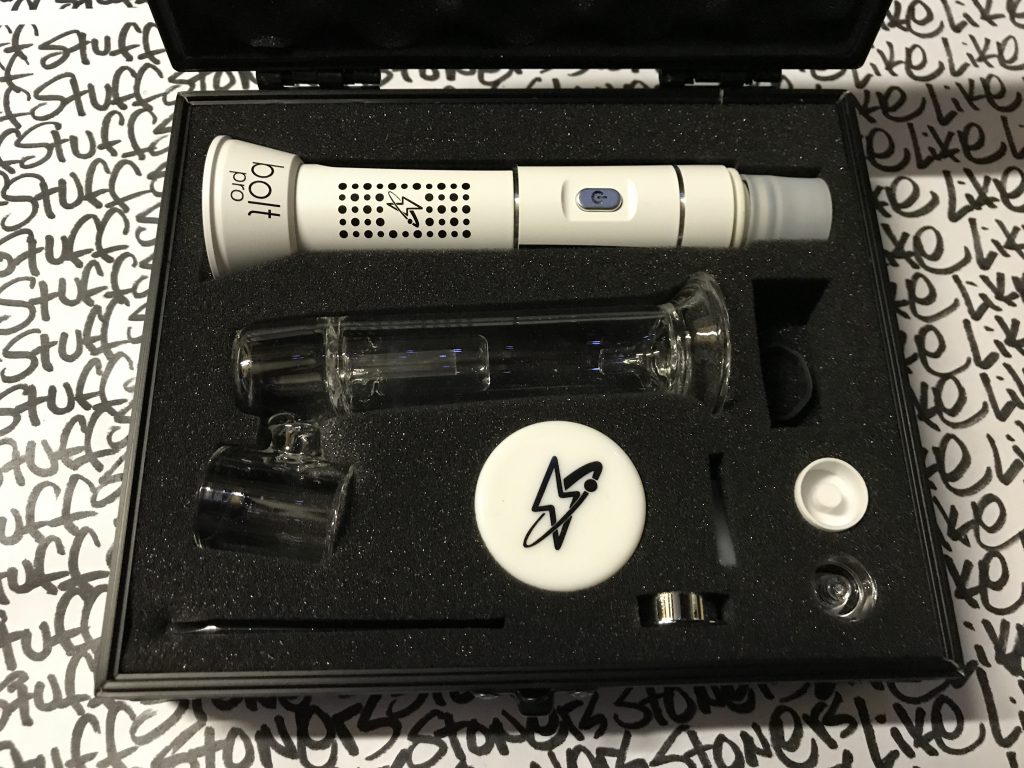 We were able to use the low power setting and all three nails and take some serious fat dab rips off this e-rig. We hit it with some really tasty and really clean sauce too and the flavor just shined. There’s something nice about not using a blowtorch and still being able to get a gigantic, velvety-thick rip of vapor from something so small and portable. Plus it looks like a fucking rocket ship too. And it’s affordable clocking it at under $200. Totally reasonable for the quality.

We didn’t use the high setting because we had some really clean shatter that tasted so great with the Dabado Bolt Pro. We imagine that the high temperature setting would be more than enough to boil just about any oil that you could throw at this thing. 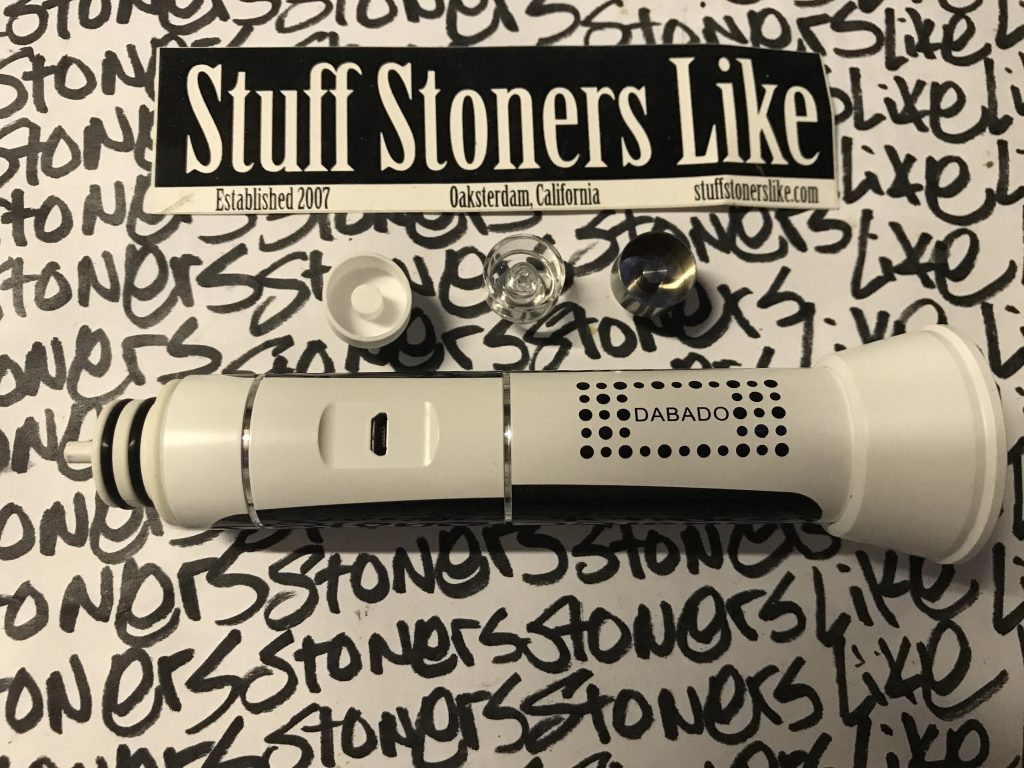 We fully charged the unit when we first opened the box. By the way the power button will glow red as the Dabado Bolt Pro is charging. It then will turn green once the device is completely charged. We noticed that we could take maybe a fifteen or so really solid hits before the e-rig would lose power. So if you’ve got a big session planned you might want to bring your laptop to make sure you can charge this thing in between sessions. But you know considering how small and compact this thing is we can’t complain much at all.

Some people really love glass. That’s why Dabado sent us a few awesome glass attachments to use with the Dabado Bolt Pro because they know we’re glass afficianados. Each glass bubbler attachment was unique, you know a different shape and a slightly different pull quality, but they all worked great. They each delivered smooth hits, fit nice and snug and didn’t make the device seem awkward or top heavy. Our favorite was the Recycler attachment because it seemed to provide just a slightly better filtration than the other two which were the Apollo and the Big Dipper attachment. The seem easy to clean and are super nice on the eyes. 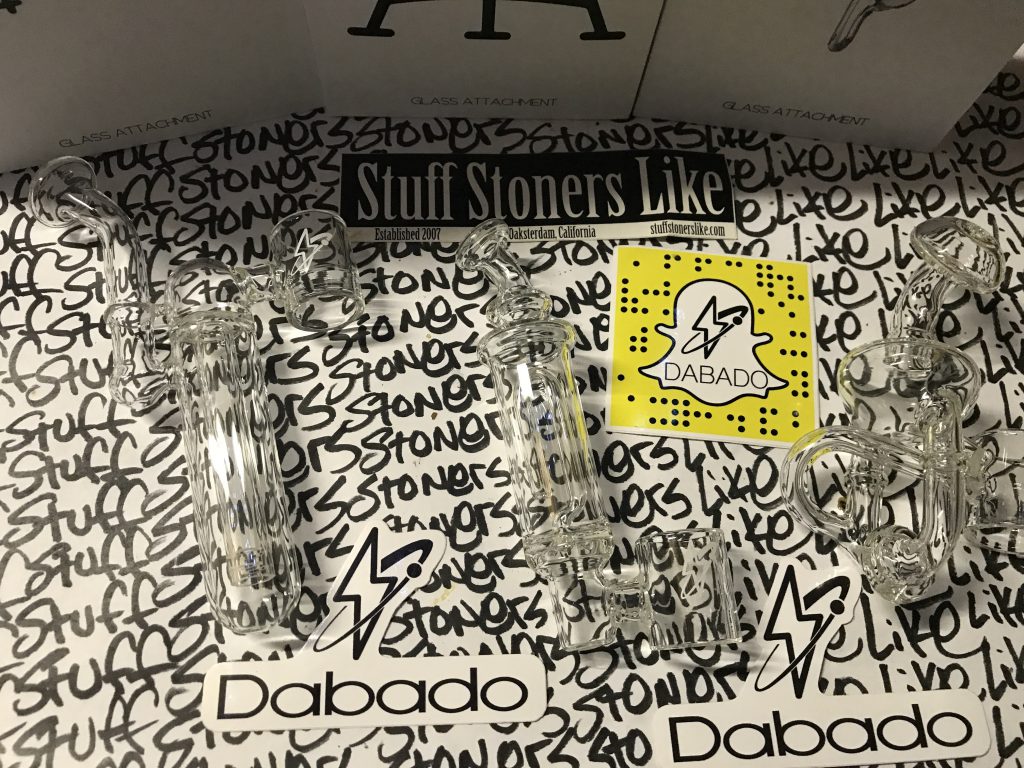 Actually these attachments turn the Dabado Bolt Pro into an impressive show piece. Plus they work well filter each and every hit. Like we got used to hitting the test unit dry because we’re lazy like that and don’t want to deal with cleaning shit, but to really get the full benefit from these awesome attachments we had to use ‘em with water. Once we filled them with some water we were treated to some super smooth hits—we’re taking hits that were on par with top-of-the line glass rigs with quartz bangers and shit. 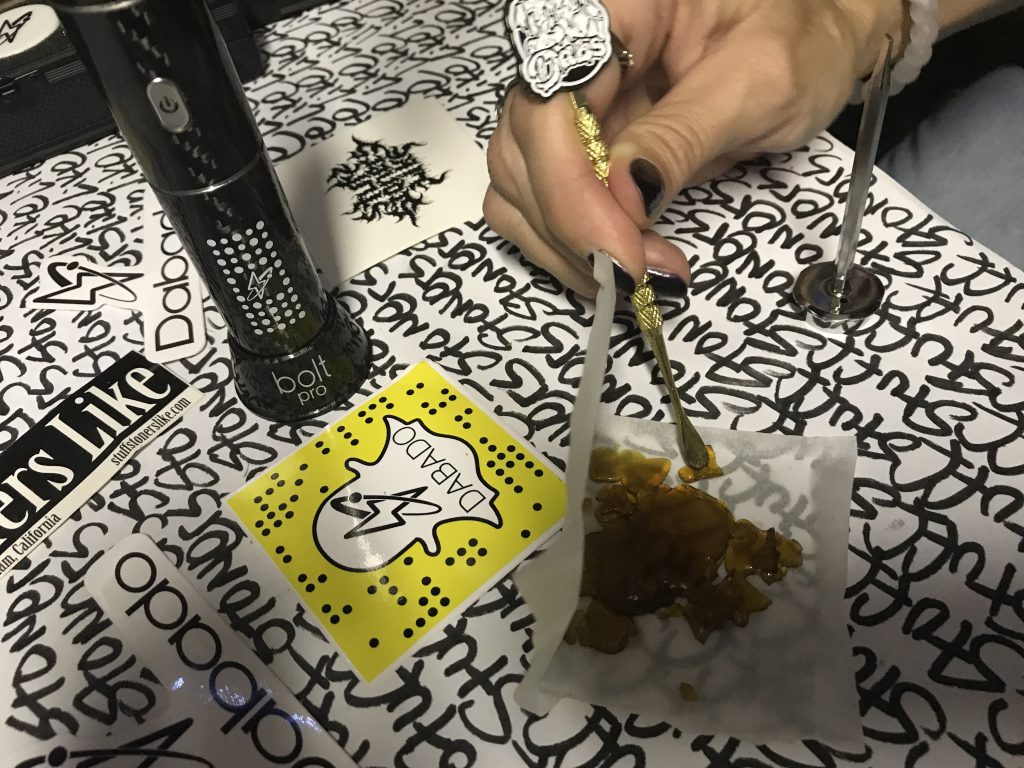 We’re really stoked on the Dabado Bolt Pro. It’s sleek, light and super cool looking. Plus is ultra portable and comes with a really fancy protective case. If you’ve been looking for a no-nonsense and affordable e-rig that’ll deliver really fat dabs you can’t go wrong with the Dabado Bolt Pro.

Do you own a Dabao Bolt Pro? What are your thoughts on it? Love it? Hate it? Let us know in the comments section below. Our loyal readers will totally appreciate it.