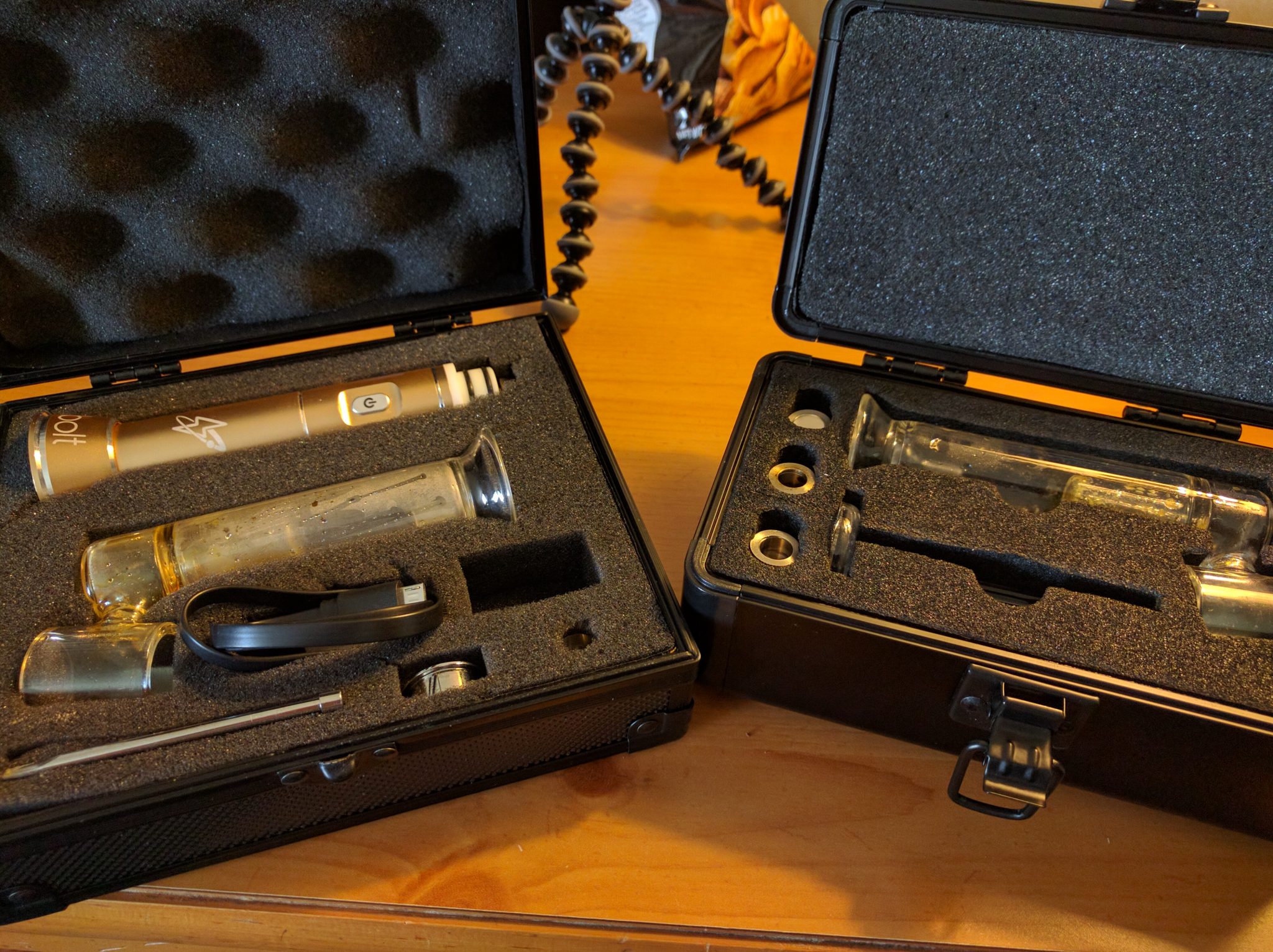 Mat Lee takes on the task of evaluating two enails—the Dabado Bolt and the Source Nail.

Dabado Bolt
Pros: 2600 mAh battery, Micro USB charging. Ability to hit the button three times and have the nail heat up. The simplicity of only messing with one nail. It feels a lot more durable to me, although again, this is just my experience, and I should direct you to my initial review, more specifically to the comments section, where you can find a whole bunch of angry Dabado Bolt customers who don’t seem satisfied at all with their purchase.

Cons: It’s funny to me, because a ton of people seem to have had issues with defective or malfunctioning bolts. I’m not saying all of it is user error, but I have to wonder. I’ve never had an issue with mine, as I’ve mentioned numerous times in the actual Bolt review. I try to be extra careful with my toys and tools, but as you can see from my broken SourceVapes Nail glass, shit can happen. Fortunately for me, shit has never happened with my bolt. I’ve had it since January 2016, and granted, I don’t use it every single day, but every time I do reach for it, it’s ready to rip.

SourceVapes Nail
Pros: Smaller form factor, 40 watt 2200 mAh battery, more control over what the battery is doing, how hot it gets the nail and what kind of voltage it’s pushing. Of course the ability to use 510 style cartridges is also a huge plus. I also like the idea of having different material dishes. They offer a titanium, quartz, and ceramic dish. You can find my initial review here.

Cons: Seemingly cheap glass and ceramic. I keep breaking the glass for some reason. First it was the globe attachment, then the ceramic heaters inside the different dishes you can attach. Then the glass bubbler attachment. I’m hoping the glass holds together long enough to finish this mobile dab off. Having to hold down the button to heat the nail is kind of a pain. I like the ability on the Bolt to hit the button three times and the nail starts heating up. The multiple dishes is also a bit of a con, since you have to be super gentle with the ring on the top of the dish. If it feels loose, don’t screw it down too tight. Otherwise you will crack the ceramic heating element underneath the dish and it will no longer work.

The Scorecard
I’ve divided my scoring up into four parts. Usability, Portability, Versatility, and Durability. Let’s see how they did.

Usability: I feel like the Dabado Bolt wins this category, simply because it has one nail to mess with, and you tap the button three times. It doesn’t get more simple than that folks. The SourceVapes nail has three different nails to choose from, all with their corresponding temperatures and watts, which is dope as fuck when it works. We’ll talk about when it doesn’t in the durability section.

The SourceVapes Nail is definitely newer, and I’m sure Dabado, and all the other companies that make stuff like this will offer these 510 mod batteries, but if we are going by raw juice, the Bolt has a larger battery at 2600 mAh versus the Nail’s 2200 mAh’s, but the Nail has more control over what you can do with it’s remaining mAh. 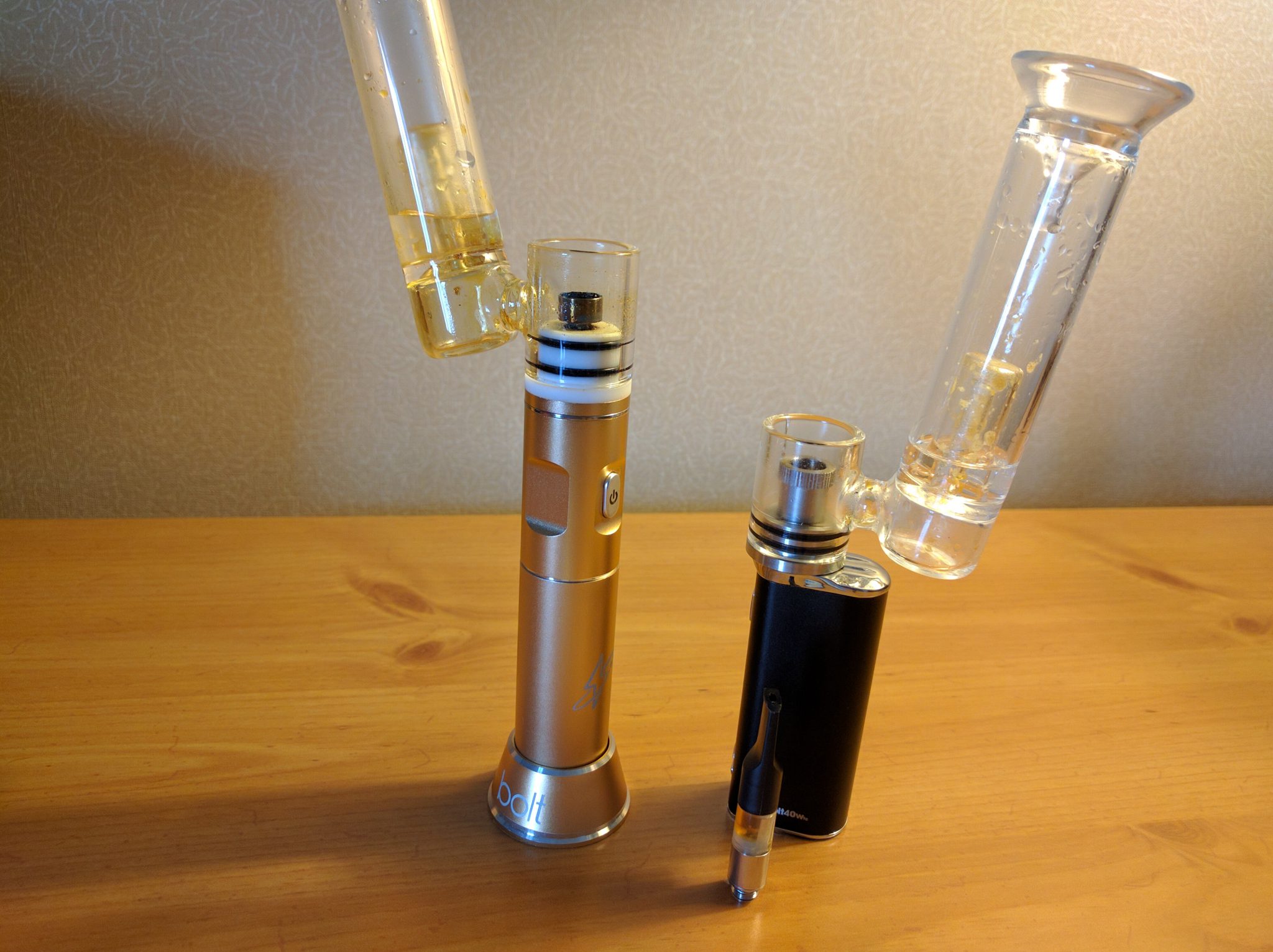 Portability: Let’s face it, dabbing on the go in any kind of legit fashion is a pain in the ass. If you don’t want to also pack a heatgun for your healthstone or a torch for your quartzcastle, or an actual enail you have to also plug in somewhere, these are both totally decent choices. You get bigger hits than out of something like a Vuber, or from ripping on just straight up cartridges. I don’t really consider cartridges dabs in the sense of what dabbing means to me. Taking some material and putting it on a hot thing then inhaling that shit.

Don’t get me wrong, carts absolutely have their place, and will until this silly prohibition ends, but they don’t get you blazed like dabs do. Personally, if I am just bringing one, I’m bringing my Dabado Bolt. Partly because it’s not broken, and partly because the SourceVapes Nail generally doesn’t have a nail in it, it has a cartridge. That being said, both units are equally portable.

Versatility: This one definitely goes to the SourceVapes Nail. Not just because it let’s you insert a 510 cartridge, but because of how much control the electronics give you over the battery, and thus the temperature, and how quickly the nail gets up to said temperature. So it really depends on what you want out of the device. You can have nice and simple, or you can have nice and a bunch of options to mess around with. It totally depends on what kind of person you are. I should mention that you can get a Dabado Bolt M 510 mod battery attachment for the SourceVapes Nail battery. If you want the best of both worlds I suppose. 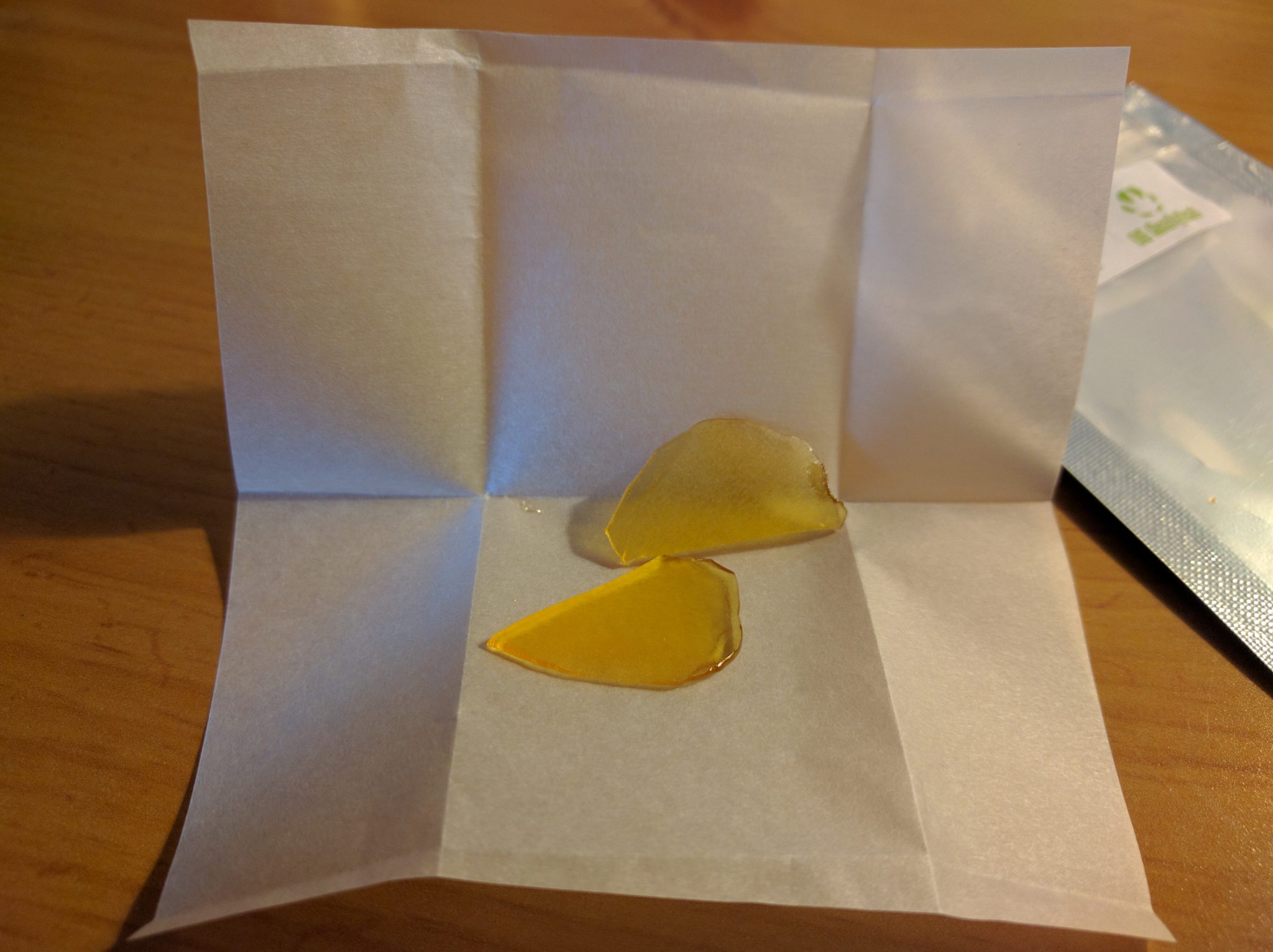 Durability: As I was saying before, the ability to choose what nail material is awesome, but the second something goes wrong with the atomizer or the battery, it won’t recognize what has been inserted and you have to revert to manual mode, if it will even let you. Sometimes you just have to throw out the atomizer and get a new one. Luckily for me, the kit came with three, and when I wrote to them about how all three of mine broke, they were cool about sending me three more. They also seem to be interchangeable, although I’m not exactly sure if they are supposed to be. I’ve already broken one as I’m writing this and filming the video. The Bolt is still standing firm in one piece. But again, a lot of people have had a lot of differing experiences. For my own personal experience, the Dabado Bolt wins the durability category.

Final Thoughts: As I said in the video, I think it really depends on what your use case is, and personal preference. I like them both. But I am partial to the Dabado Bolt, solely because I’ve had it for longer, and it hasn’t given me shit yet. The SourceVapes Nail, or at least the glass and the elements seem way too fragile. I’ve already gone through five elements and both glass pieces are broken. I’m assuming they will send a replacement, although I haven’t really bugged them about it. I’m content using the awesome battery the SV Nail comes with for cartridges, and my Dabado Bolt for actual portable dabs.