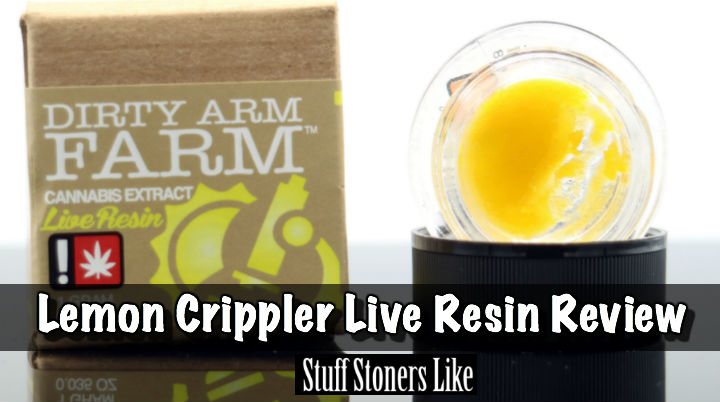 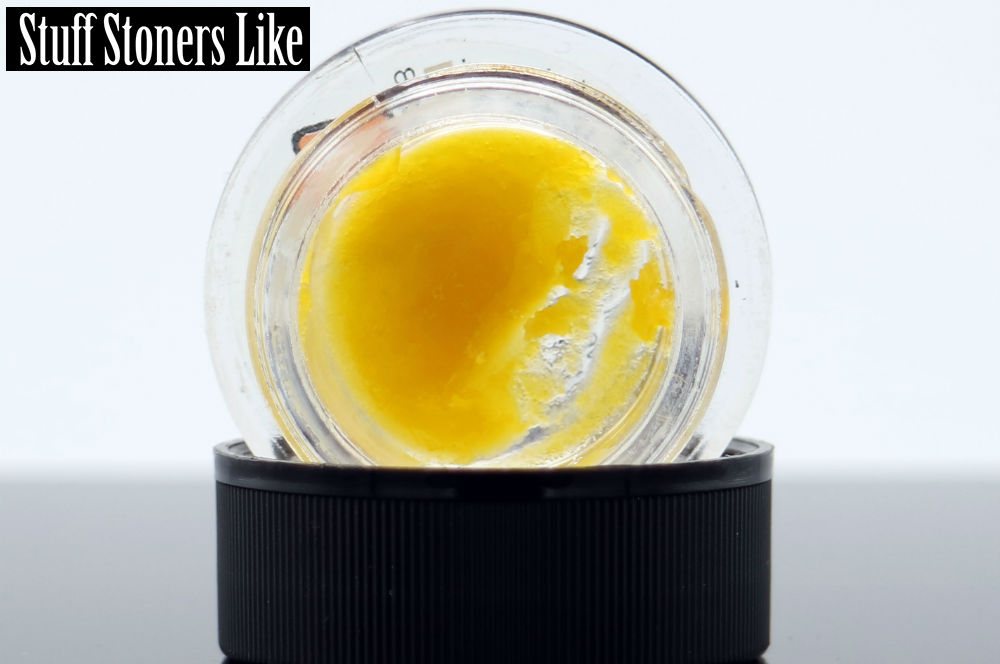 Appearance and Feels: This Lemon Crippler live resin has buddered up, as they say. Add a little energy into the system and you cause nucleation points. These points get their structure all out of wack, which makes them not see through anymore. The thing is, at a certain point, like my good friend Nigel says, it’s just eggs baby. The only difference is how you want them served. Do you want your shit scrambled? Do you want them over easy? At the end of the day, I understand it’s a sku with a shelf life, but I just want people to understand that just because it looks a certain way doesn’t mean it’s not good.

The Jack Herer live resin I previously reviewed had more clarity to it for sure. Which means perhaps  it was extracted colder, which got less fats and waxes, or it was dewaxed inline. That’s not to say this wasn’t, but whatever added the little bit of energy that was necessary to cause this buddering up, or nucleation, only caused it in the Lemon Crippler, and not the Jack Herer gram that I purchased. The terpenes also have a lot to do with it. Perhaps this helpful reddit user can explain this a bit better than I can.

Intoxicus5 says, “Saying that budder nucleates or that nucleation is occurring doesn’t really tell anyone much because nucleation itself is a broad term that can apply to non-crystals.” What is going on is called pseudo polymorphism. Shatter is a monocrystal; this means that the molecules of cannabinoids, terpenes, and other lipid fractions are in a perfectly repeating pattern. Shatter is transparent because light can pass through it without bending much.

Budder is a polycrystal. The pattern has broken into small chunks. It’s opaque because light bends too many times through all the tiny crystal structures. Some terpenes act as interfering agents; they allow your shatter to be stable and “shattery” via how they fit into the pattern. Too much moisture, too much energy input (heat and/or agitation) or molecules that don’t “fit” well will disrupt the crystalline matrix and cause what is commonly known as “auto buddering.” Does that make sense? It’s all the same shit, it just looks different because of how it’s reflecting light back at you.
Smell: Damn you guys. The Jack smelled great, but this Lemon Crippler smells un fucking believable. It’s all the fun parts of weed extracted down into a terpy, sugary live resiny jar of goodness. It smells like pure uncut fire, I can’t wait to see what it tastes like. Holy fuck Dirty Arm. Holy fucking good glob. Lemon Crippler mmm mmm mmmm.
Flavor: Yea you guys and gals, if you have a chance to try this shit out, holy shit. It’s like a party of all my favorite lemon candy, blowing sweet lemon pine terpene juice all over my taste buds. For real though, it’s no simple task to grow super good weed, then get it extracted and purged in a way that maintains the terpene profile. Beautiful work Dirty Arm. High: The Lemon Crippler high is everything you would expect from a live resin of this caliber. It’s a cerebral, uplifting and happy vibe, something you would dab then make plans to take over the world on. I’m saying it’s good, and like I said before, if you have a chance to try it, no shit, go give it a try. I found my gram at a cool little shop in Bend Oregon called Cannabend.
Overall: As far as what I’ve seen in the shops for live resin, and the farm I keep hearing people recommend time and time again, it’s Dirty Arm Farm. The taste, smell, and high of this live resin is on point. Plus, who doesn’t like some good quality terp sugar? I really do hope you take what I’ve written to heart, and become a more educated top shelf consumer. This Lemon Crippler is some stuff stoners like.