Special Message from the MAKERS of STUFF STONERS LIKE-We have a new columnist over in Amster-D who’ll named Ewan McCrack. Stay tuned for more coverage.

As STUFF STONERS LIKE  posted an article last year about the rumors of the upcoming change in drug laws in the Netherlands, it seems that the rumors were true. On the 1st of May the Netherlands has taken the new law, which forbids tourist to visit cannabis café’s, in effect in the South of the Netherlands. The Southern part of the Netherlands shares borders with both Germany and Belgium and the government claims that more than 2 million tourists visit these parts of the country just to get a hold of their favorite herb. Dutch citizens that want to visit the local cannabis café’s, also called coffeeshops, need to be registered at the establishment in order to receive a so called “weed pass”  that grants them permission to purchase cannabis.

Smokers and coffeeshop owners in the Netherlands have protested against the new law ever since it had been announced that the new laws would definitely go in effect and on the morning of the 1st of May coffeeshop owners in the city of Maastricht kept their doors shut to show their’ dissatisfaction. Only one shop in Maastricht opened its doors, but only to refuse the first tourists that wanted to enter the establishment. The owner of one shop, that is called ‘Easy Going’, did open up his shop just to have the opportunity to refuse the first couple of tourists. The tourists immediately went to the local police station to file an official complaint for discrimination. The owner than opened the doors for whomever wanted to enter the establishment and got an official warning from the local authorities. The next day the owner did the same thing and was told by the local authorities that they would close his shop for at least a month. Marc Josemans, the owner of the shop, was hoping for this result as he is planning to take his case to court in order to prove to the judge that it is a form of discrimination to only allow Dutch citizens to visit coffeeshops in the Netherlands. “Let them close my shop down, than at least I can take this case to court”, said Marc Josemans. “Realism should win from these strange current hypocrite political decisions.”

At the moment also medical marijuana users are purchasing their cannabis at the shops as this is much easier than to get it through a doctor’s prescription. The fear of not knowing what the government will do with all the information of registered cannabis smokers is an important reason to not subscribe for the weed pass. People feel that it is violation of their privacy right. More than a 1000 smokers where questioned in a survey that was held in Amsterdam and it turned out that most local smokers are not willing to register. Only 30% of the smokers that were surveyed said that they would register for the pass. 25% said they would start to grow their own cannabis and a bigger percentage admitted they would probably start purchasing their weed from illegal dealers. Meanwhile in the South of the country street dealers are already taking over business and the police don’t seem to care too much. 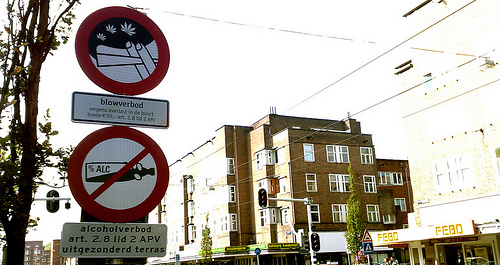 It is a mistake though to think that cannabis has ever been completely legal in the Netherlands. Since the 70’s the Dutch authorities have had a policy of tolerance, allowing registered coffeeshops to sell cannabis to adults and every adult citizen is allowed to buy up to 5 grams of cannabis from the shops each day. Coffeeshops however are not allowed to have more than 500 grams of cannabis inside their establishment, which means that if a shop sells more than 500 grams per day, they need to get it delivered to their shop several times a day. The strange thing about the Dutch policy has always been that cannabis seeds are legal in the Netherlands, but it is not allowed to cultivate large amounts of cannabis. Every person in the country is allowed to grow 5 plants for his or her own usage, but this is of course not where the cannabis supplyling the shops comes from. Every year the Dutch authorities uncover about 6,000 illegal plantations in their little country and the Dutch are exporting more than half a million kilos of cannabis each year. This problem has led to many discussions in the government for the last 20 years. Some political parties believe that the solution would be to regulate the cultivation of cannabis rather than to ban tourists from the more than 600 coffeeshops that are currently based in the Netherlands.

The new law is moving the sale and cultivation of cannabis even more into the hands of criminal organizations. In a poll taken last week amongst the various political parties in the government it shows that two weeks after the new law had gone in effect in the South, 60% of the government thinks the new law should be turned back. Unfortunately, the Dutch parliament has fallen in the end of April and new elections will be held in September. The new drug laws are supposed to be going in effect in the rest of the Netherlands, including Amsterdam, on January 1st 2013 and according to the Minister of Justice Ivo Opstelten, who came up with the brilliant law, there is not a chance that the new government will cancel the new law. Many cannabis loving tourists from all over the world are currently moving fast to visit Amsterdam in its current “free” form as it is on the bucket list of many smokers worldwide.