Appearance and Feels: The Quantum Blue crumble from Apollo Grown has a spongy, tacky sort of texture. It’s got some nice light blonde in it mixed with some darker blonde parts that look more like conventional taffy than crumble. It also has more of a musk than most crumbles, which I’ll get into in the smell section.
Smell: She’s definitely got thick musk to her. It’s nice, and makes sense as to the appearance of it. There’s a sweet, earthy aroma with nice spicy kick there. It’s got a tinge of the blueberry smell from the Blue Dream side, with the earthy spicey smell most notable crumbles and cakes are known for. It definitely smells like some fire crumble for sure. Flavor: All earthy and spice. It’s a nice solid dab for how fluffy it is. Some of it will stick nicely to a dabber, but other parts are a bit more crumbly. It’s a good mix, whether or not they meant it to be that way. It’s just something that happens when you are trying to package material that likes to shift forms. The taste is great for sure. It’s like a mouthful of satisfying earthy pungent sativa  cannabinoids and terpenes.
High: The Quantum Blue crumble has a great head change to it followed by a creeper effect of stony spaced out goodness. I took a couple of dabs right off the bat and started feeling it immediately. Which, for a crumble that has a THC percentage over 70, is to be expected. There’s a great balance between keeping it crumble and keeping some good terps in there, and the extraction crew over at Apollo Grown has it down to a science. 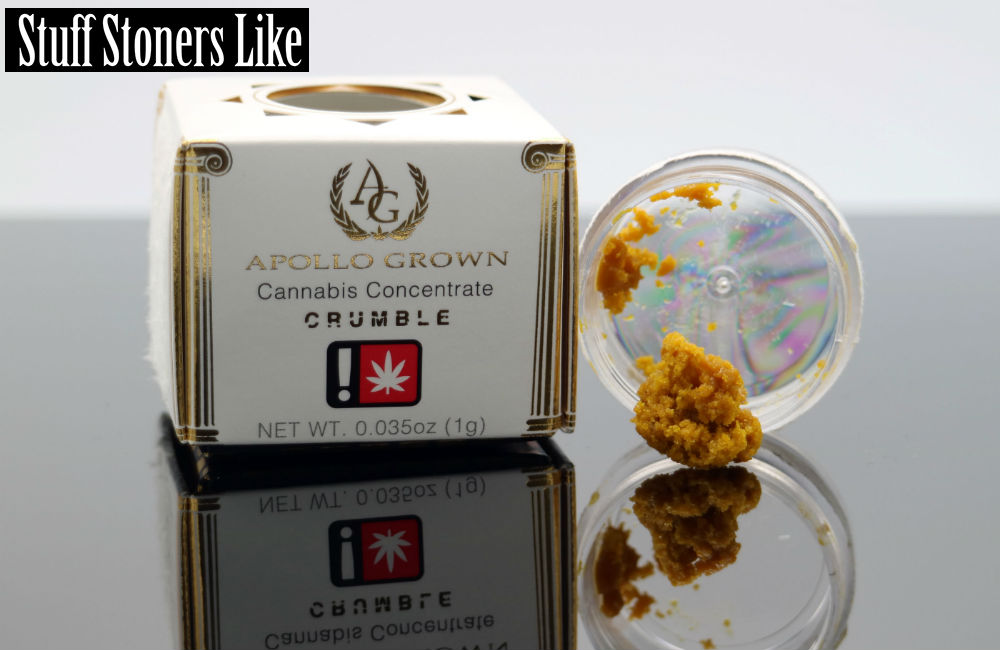 Overall: The price is definitely right at $40 a gram out the door at the Terpene Station in Eugene, where I got this, and some other goodies to review. The crumble looks great and has a pleasant taste and exceptional high. The Quantum Blue crumble from Apollo Grown is a great choice when perusing the crumble offerings in the Oregon recreational cannabis market. The high can be a bit heavy if you are new to doing dabs, so make sure you take it slow with this one. You should always take it slow until you know how your endocannabinoid system is going to respond to different terpene and cannabinoid profiles. For me, the Quantum Blue crumble is just right, and stuff stoners like.