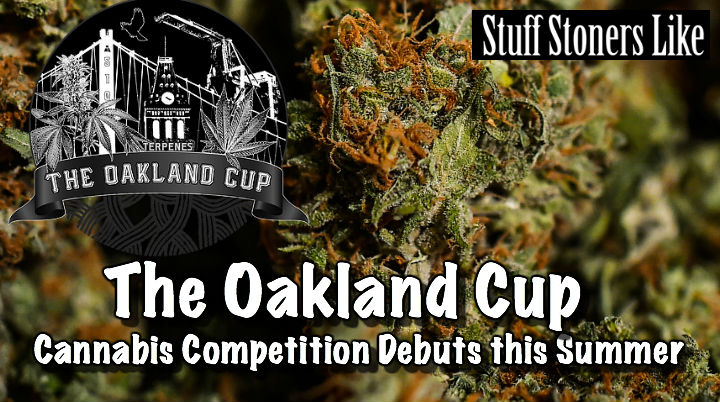 Oakland will host its first official cannabis competition over the summer. The inaugural Oakland Cup, organized by the 4&20 Blackbirds who run a hip cannabis cultural center from their sprawling West Oakland Warehouse, will be held June 30th. It’ll surface and celebrate the best cannabis flowers, extracts and infused products that the Golden state currently has to offer.

“Oakland has been the epicenter of the cannabis trade for decades—bringing together the farmers of Northern California with the most discerning cannabis enthusiasts in the world,” says the cool and collected Chip Moore, lead judge of the upcoming competition and the CEO of the 4&20 Blackbirds. Moore, his eclectic culture center and his struggle to open a dispensary in Oakland were recently featured on BET. Check it out below.

While sitting in his fantastic, graffiti-filled lounge (painted by a pair of talented, local, underground artists) at the top of his expansive warehouse, we share a perfectly-rolled joint with Chip and his partner Myles and chat about the Oakland Cup and the current state of the industry. It’s a few days before Cloud Sesh, a weekly pot party hosted by the mythical Dakh—a master of cannabis ceremonies of sorts with complete mastery of what stoners dig. His bi-weekly events fill the Blackbird warehouse with a multitude of marijuana vendors, sometimes as many as forty or fifty. The pot purveyors hawk the fruits of their labor while about a thousand or more cannabis enthusiasts blow through each sesh. (We heard that more than 1,500 stoners attended their 4/20 party recently.) 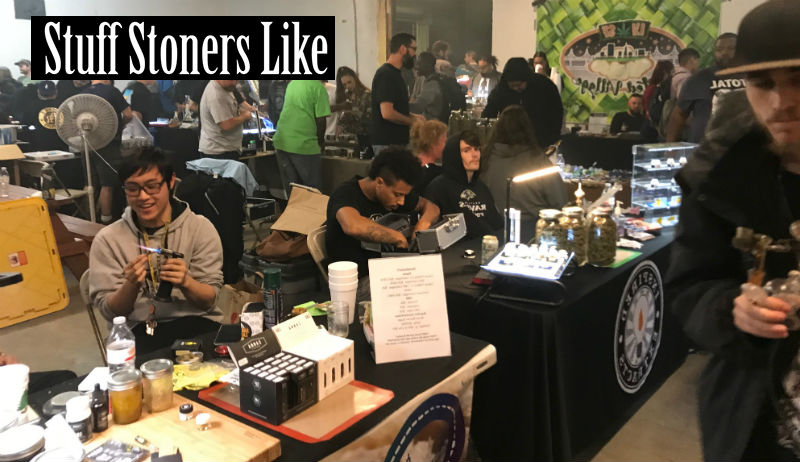 The events, which started only a few months ago, are already well-known for combining top-notch cannabis with a steady stream of music and chill vibes. There’s also some death-defying skateboarding occasionally and live music. If you haven’t attended a Cloud Sesh, love weed and need a healthy injection of stoner culture then you really owe it to yourself to attend. Plus you can’t find a better or cost-effective ounce unless you spent a decade learning how to grow weed and then lovingly grew it yourself. Get in touch if you’re down and we’ll give you the deets?

“We are at the dawn of a new cannabis industry,” Chip says about the upcoming contest and celebration while taking a huge drag. He slowly exhales, “the Oakland Cup 2018 may be the last time that the storied small-batch producers and family farmers of California will be able to compete against the new cannabis industry.”

With tight new regulations for California and Oakland expected shortly who knows what will change when it comes to these beloved marijuana events? Many cannabis enthusiasts in the industry that we’ve chatted with who have their livelihoods wrapped up in a business that’s still federally frowned-upon are all waiting to see how events like the Emerald Cup, or the Golden Tarp, or even High Time’s famed Cannabis Cup will survive if marijuana consumption or sale is banned at these things. So this really could be the last hurrah in Nor Cal before serious changes occur.

One thing that really sets apart this upcoming cup from the multitude of California cannabis competitions is the judging. At the Oakland Cup all cannabis flowers will be judged together—combined in the same category. There’s not a separate section for outdoor flowers, or light dep, or indoor-grown weed. Hell there’s not even a separate category for sativa or indica plants for that matter.

“We strongly believe that all flowers should be judged on their own merits,” Moore tells us while sorting through a turkey bag stuffed with cannabis. “To minimize surprises all entries will be subject to rigorous lab testing performed by Steep Hill labs in Berkeley.”

Solventless concentrates are another category to be judged at the Oakland Cup this summer. This bucket includes products like bubble hash, rosin, diamonds, sauce, etc. Basically any hash product that’s produced without using a chemical of any kind. Solvent concentrates will be judged on their own as well. We’re talking butter, shatters, snap-and-pulls created from methods like butane or CO2 extraction—you know with the use of chemicals to strip off and concentrate all those tasty trichomes. Over the last year or two this stuff has made such a huge splash on the marketplace that we expect to see a wide variety of products in this mix.

At the Oakland Cup there’s also an entire category dedicated to cartridges. Carts are hella popular here in the Bay Area. They’re convenient AF too—great for blazing up a movie theater, the cereal aisle at the grocery store or the workplace bathroom. So of course these little gems need their own little category. They may all look pretty similar but don’t be fooled into thinking that their smell, taste and effect are the same—that shit varies immensely. Edibles will also have a category of their own. We expect to see a lot of sweets but are secretly hoping that a few savory items will pop up on the judges list as well. There’s also a CBD as well as a Tincture and Topical category.

The Bay Area is the undisputed home of the medical marijuana movement. It’s where legalization first started as proposition 215 legalized medical use back in 1996. Now the Oakland Cup serves as the annual event to celebrate the hard work of the activists, growers and the like that made legalization possible. Speaking of activists the legendary and verifiable marijuana hero, Rick Pfrommer will be leading the Oakland Cup judging panel—so you know that this whole contest is going to be super legit. We hear that when Pfrommer enters a room people put away their inferior weed. That’s because this dude was the guy responsible for buying marijuana from vendors all up and down California while employed at the Harborside Health Center during its heyday. Pfrommer has single-handedly rejected more marijuana than most people will ever see in their lifetime. Jason Rosenberg from DOPE magazine and Moore will also act as lead judges. And guess who else will be judging right alongside these cannabis luminaries? That’s right—the makers of Stuff Stoners Like. So we’ll see you there, right?

Interested in entering your herb it the first annual Oakland Cup? Here what you need to know. First of all your entry will have to meet some basic standards. Products with any detectable pesticides, over 400 ppm of residual solvents and over the allowed microbial amounts, will be disqualified. Flower entries require a three ounce submission. Concentrates? They require a ten gram submission. All entrants will also need to pay a fee of 420 dollars to cover the cost of lab testing.

Tickets go on sale in a few weeks. We hear that they’ll be around ten to twenty bucks. There are also going to be VIP packages available as well. For more information on entering the Oakland Cup visit theoaklandcup.com. We’ll see you there June 30. Puff…puff…pass.

One Response to “The Oakland Cup Cannabis Competition Debuts This Summer”