The VaporFi Atom is a dry herb vaporizer that rivals the best on the market. It looks and feels a lot like the industry leading PAX 3 but it clocks in at far cheaper. In fact it’s about sixty bucks less. It looks really cool and feels pretty well-built. It’s small enough to fit in your pocket or purse but not get lost in there and has a fairly large, quick-hearing oven so you don’t have to keep refiling it all the time. But how does the Atom perform under real world conditions? And is this thing really stuff stoners like?

The VaporFi Atom is one of the coolest looking vaporizers our there right now. It’s all futuristic and stealthy and kind of reminds us of the PAX 3 it it’s overall simplistic design. It’s sleek and stealthy. The actual dimensions are 8mmx21.5mmx31mm which makes it easy to palm while vaping in public and easy to conceal when not in use. The 100% food-grade silicone mouthpiece seems a little larger and slightly longer than the PAX 3. It feels like it’s made from an even softer and more flexible rubber than the rival. It’s removable so you can clean underneath it as well as access and clean out the vapor path if necessary.

The VaporFi Atom looks and feels really solid. It seems durable and well-built so it should last a long time. It’s not too light and actually slightly heavy to the touch—which we dug. We’re not looking for something delicate and waify—we want something substantial that will hold up over the test of time and deliver many sessions before it dies. So far the Atom seems like it’ll take a few lickings and still keep on hitting. In fact we dropped it a few times already and you can’t even tell that it bounced off the ground a couple of times. There’s a button on one side of the unit and a small LED screen that resembles a flower on the other. The flower is color coded to give you an idea of when the VaporFi Atom is heating. While it’s warming to temp it’ll glow white. When the vape’s ready to hit the LED lights will shine green. You can shake the unit while it’s heating and the LED display will show you how much battery life you have left. This shaking thing is a cool feature that we haven’t seen on a vape yet. It’s great to know where you stand when it comes to battery life before you grab this thing and take it out of the house. Nobody likes to start a session only to have it ended prematurely because the battery died. We’re a little old-school and like to see clouds when we sesh so we preferred the highest temperature setting of 460 degrees. With it we were able to not only get a pretty high-quality, full-volume cloud that was very tasty. We tested our unit out with some Hawaiian Dream from Sticky Fingers seeds and that distinct tropical flavor shined right on through. We noticed that dryer herb worked a little better than weed that’s a bit moist. If you’ve got some slightly wet weed just grind it up and leave it sitting out for a few minutes to dry up before you pack it into your Atom.

Oh yeah that reminds us to mention that grinding the weed for use with this thing is the best practice. The smaller weed bits not only allow you to fit more in the fairly large oven it allow you to tamp the weed down better as well. Don’t jam too much in the oven or you won’t get very good airflow. But pack it firmly to ensure that all the weed bits are in contact with one another and the surface of the oven. Feel free to stir your herbs a few times during each session for best results. How fast does the oven heat up? We noticed that it took about a minute and it really didn’t matter which temp setting was selected. Like the Pax 3 the oven is also accessed via an easy-to-open, easy-to-close magnetic lid.

The VaporFi Atom comes equipped with a 3000mAh battery that seemed to last for quite some time. We were able to get several full sessions in before we had to change it with the included micro USB cable. One thing that we really dig is that the included USB cable is a standard size that fits a lot of products unlike the PAX 3 and others which utilize their own proprietary plug or charging dock that we all inevitably end up misplacing. Why don’t all manufacturers just use a standard-sized plug to make things easier on everybody? Anyhow it only takes two to three hours to charge the VaporFi Atom entirely. You can also use it while it’s charging. Believe it or not this is a great feature. Nothing sucks more than jonesing for a hit and having a dead battery—luckily you can plug this thing in and get stoned. 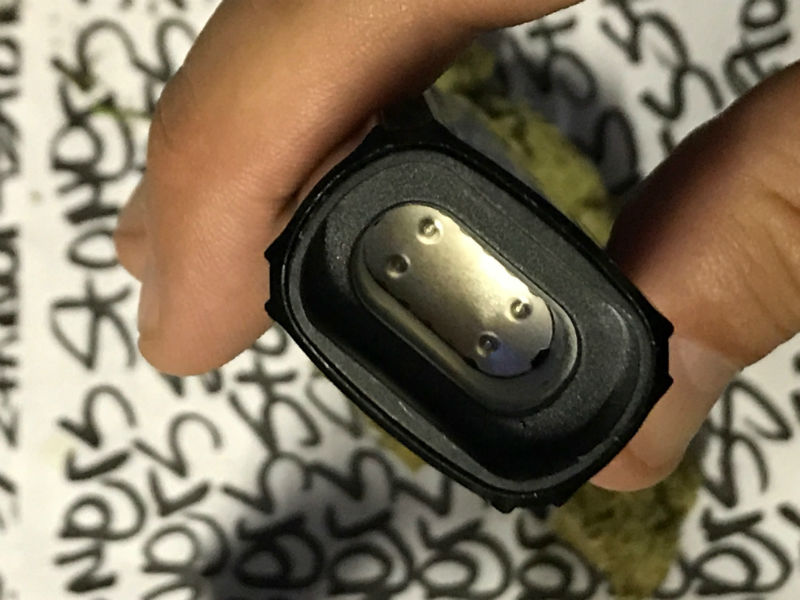 The VaporFi Atom’s price is closer to $100 than it is the $200 or more you’ll spend on the Pax 3. It looks just as cool if not cooler. It also performs just about as well. And it’s got a few temperature settings that’ll keep both taste and cloud-chasers satiated. Plus VaporFi is a well-known and trusted vape pen maker. They guarantee all their products and offer all your money back if you’re not happy. So if you’re looking for a stealthy dry herb vape that won’t break the bank you really don’t have anything to lose by choosing and rocking the VaporFi Atom. Stuff stoners like? Indeed.