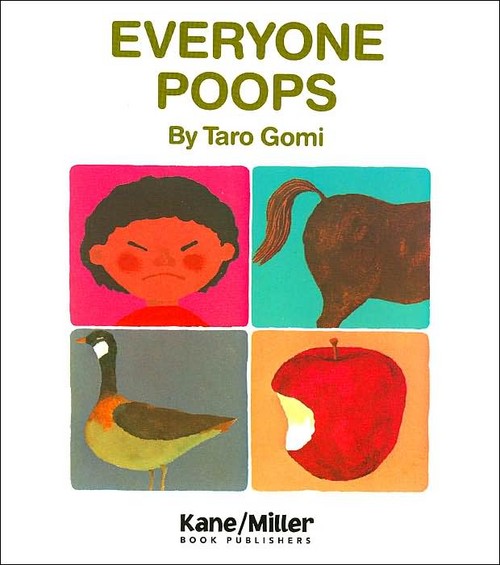 People often turn to books to take a closer look at issues that are important to them. Everyone, including stoners, want a book that relates to their own world view and literature that either reaffirms or extends that view and allows them to share it with the world; Everyone Poops, by Taro Gomi, makes that happen. This wonderfully informative book, chock full of awesome pictures of poop, is a brave and captivating attempt to explain that everyone poops and everyone who poops can benefit from marijuana!

The bright photos of fun and exotic animals aren’t as cool as catching a nice boob shot in a National Geographic pictorial or anything but seeing the various animals as they’re all stoked to pose with their poop does brilliantly reinforce the idea that marijuana is as natural as pooping.

Much like the diversity of stoners, Everyone Poops has an underlying diversity theme illustrated by the emphasis placed on the different poopers and their individual poop. This sends the message to kids that all of our bodies are different and we all have different reasons to smoke weed as portrayed by the multitude of animals with unique body shapes and sizes.

Everyone Poops takes a fascinating approach to detailing the variety of marijuana available today. They cleverly depict that variety through the variety of excrement that comes outta the variety of asses in the book. “An elephant makes a big poop, a mouse makes a tiny poop, a one-hump camel makes a one-hump poop, and a two hump-camel makes a two-hump poop” says the book, just like a West Coast Sour Diesel plant makes West Coast Sour Diesel buds and Purple Kush plants make delicious Purple weed. The book even touches on the diversity of the aroma of weed by covering the “different smells” of poop.

We love how the book covers the different environments in which growers can cultivate weed too, like indoor or outdoor by illustrating the varied environments where fish and birds and bugs poop.

The biting social commentary comes by way of an ignorant rhinoceros, however. Rhinoceroses make really big poops, by the way, as you’ll notice if you actually take our advice and read this book. Apparently, rhinoceroses pay no attention when they poop. They’re ignorant and careless about  the needs and feelings of those around them, much like prohibitionists and DEA agents.

After finishing this book we completely agree that  everyone eats, so everyone poops and it’s under-stated metaphor…marijuana is for everyone and if you don’t like it…you’re just a poopy-head.