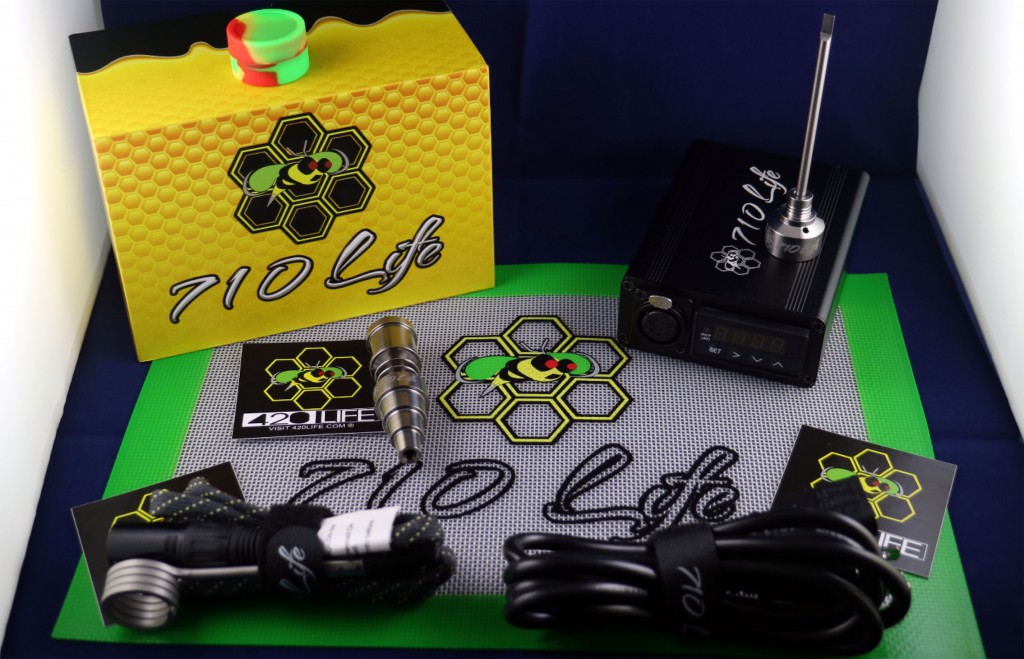 Recently, the fine people over at 420 Life sent me their 710 Life ENail to review. I have to say, the last time I reviewed an enail was back in August of 2015. I’ve been using the LIT E-nail ever since, but does the 710 Life ENail keep up?

Right off the bat, I like the price point. It’s not as low as the Enails on High Five Vape, but not quite as expensive as the LIT E-nail. I also like the slim form factor, and the nicely wrapped, flat cord for the coil. The 710 Life ENail boasts a 3 times faster heating speed than any other brand. That has me curious, so you know I had to put it to the test.

Let’s keep in mind that my other enail is two years old at this point, so I wasn’t really expecting it to keep up, but it’s good to know that the 710 Life enail gets up to temp in a couple minutes. I would be curious if enails from other companies that were made in the same year as this one get beat just as bad. The 710 Life was able to get the nail up to temp, and I was able to take my dab before the other enail was at 650. Impressive.

They also say on the 420Life.com site that this e-nail is the only AC powered enail one to have a fuse, just in case something happens to the coil or the cord. Personally, after watching a couple of cords smoke and try to catch fire from one particular brand of enail which will remain nameless, the fuse is a fantastic idea. Whether or not 710 Life is the only one to do it, I cannot say for certain, although it doesn’t look like my other enail has the fuse. In it’s defense, as I said, it is a couple of years older. Out of the box the 710 Life enail was set to 710 degrees F. That’s a bit hotter than I like to dab at, especially if I’m dabbing distillate, so I always turn my e-nails down to 650 degrees F. To set the temperature on the 710 Life ENail, simply use the arrow buttons on the temperature control keypad. Once you have your desired temperature set, the numbers on screen will continue to flash for a few seconds, then the temperature will start to make it’s way toward your setting. That’s it, no other buttons or anything to mess with.

The enail can function from 50 degrees F to 1200 degrees F. Although they say on the 420life.com site that the coil max temp is 1000 degrees F. All way hotter than you would need to have this set to for a nice dab. Although I have heard that some people like to use that higher max temp as a cleaning cycle for their nail. I’m not a fan of doing this, but if you don’t mind seeing your coil get red hot, it could be a good way to breath a little new, albeit short lived life, from that old crusty quartz. 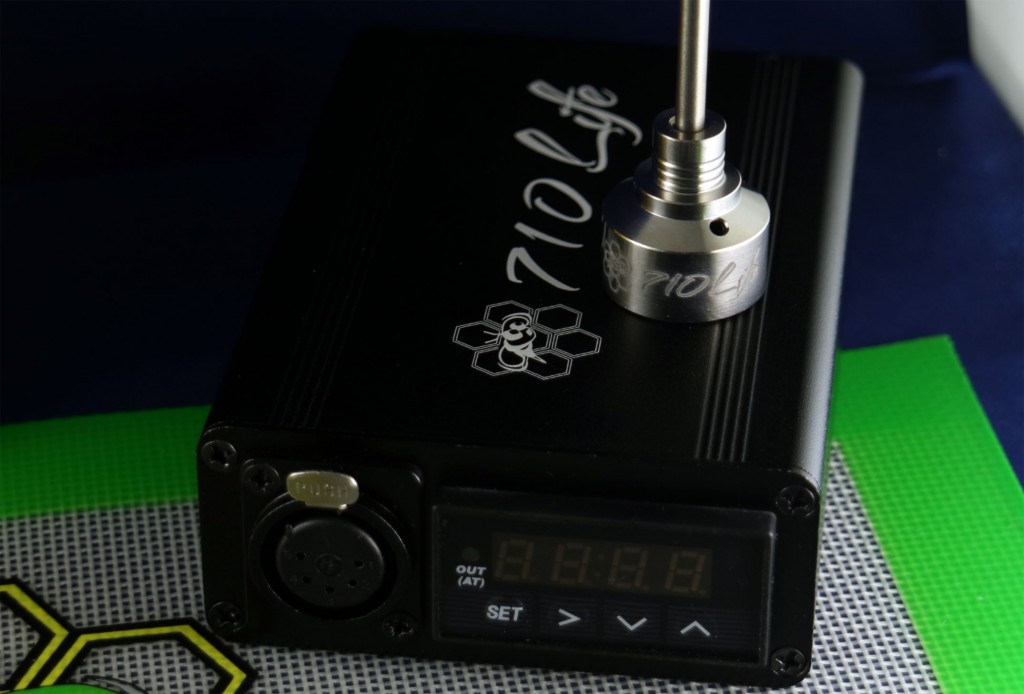 The 710 Life ENail comes with a male / female multiple size grade 2 titanium nail. These are definitely good if you don’t have a nail for your e-nail already, but when people put TI nails in their handmade heady glass rigs, it always makes me nervous. So I opt for the quartz equivalent, at least until the price comes down on the JRed Diamond Knot enail, or I win some sort of coolest stoner of the year award that pays a grip of cash.

For now, I use the affordably priced, and totally awesome quartz enail. You can get a domeless style like the one I have in the video on the 420 Life site for around 35 bucks. For those of you who like the banger style more, they also have an enail banger for the same price. As they say on the site, “Once you upgrade to quartz, you’ll never go back.” That usually holds true, although I have a couple of friends who are die hard titanium fanboys. Don’t we all? Dialing in the enail

While I didn’t get one to review, if it’s the same high quality as the coils they sell, the five foot heater coil extension looks like some handy stuff stoners like. How many times have you been at a spot setting up your e-nail, and needed an extra few feet on the cord? I know I have.

I did notice that unlike my older enail, the 710 Life enail temperature controller doesn’t raise the temperature above what it’s set at. The other one does this under the assumption that even though the coil might be registering 650 degrees F, the nail itself is actually a bit cooler. So it will raise the temperature to like 670 or 680 depending on what material it’s set for. This doesn’t matter once the enail has been on for a while, and when I took a dab as soon as the 710 Life said 650, it was definitely hot enough to work. It’s just something I thought I would point out.

I should also say that the LIT is set for titanium, and I’ve been using quartz with it. If you change the settings to a different material, you can really mess up some junk, which also voids the warranty. Not that mine is still covered, but again, just something I thought I would mention. 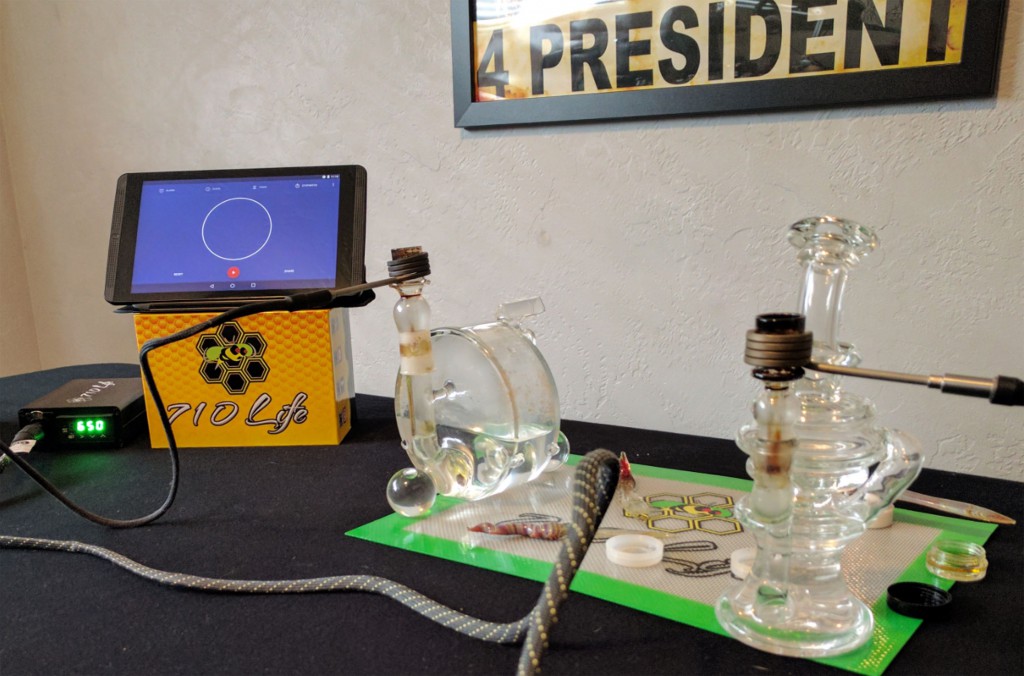 I like how they include rubber feet also, so you don’t scratch up whatever furniture the enail happens to be sitting on. It also adds another level of grounding to the system, since rubber is a nice insulator. The 150 watt heating element is a nice touch, as is the durable, kevlar sheathed cable. One of the big nerdy things I like about this enail, is that the power cord isn’t attached. They use a desktop computer style power cord. This means that it’s more durable, and unlike some other models, if something happens to the cord, you won’t have to mess around with soldering anything. You can just grab a cord from an old computer, and chances are that will do the trick.

Overall, I really like the 710 Life ENail, and if you are in the market for one, I definitely recommend it as a good option. They even have some built into Pelican cases

, in case you don’t feel like trying to take apart one of their enails and cut slots into your own peli. This is definitely a go to option for the dapper dabber on the go. A peli that has an enail built into it, that also fits a rig, nail, carb cap, and dabber. Clutch? I believe that’s what the younger generation calls it. Savage? Yep, it’s that to. Brutal? Sure. But if you ask me, the 710 Life enail is pure stuff stoners like.

Have you tried the 710 Life enail or any product from the 420life brand? Let us know what you thought in the comments section below, man…