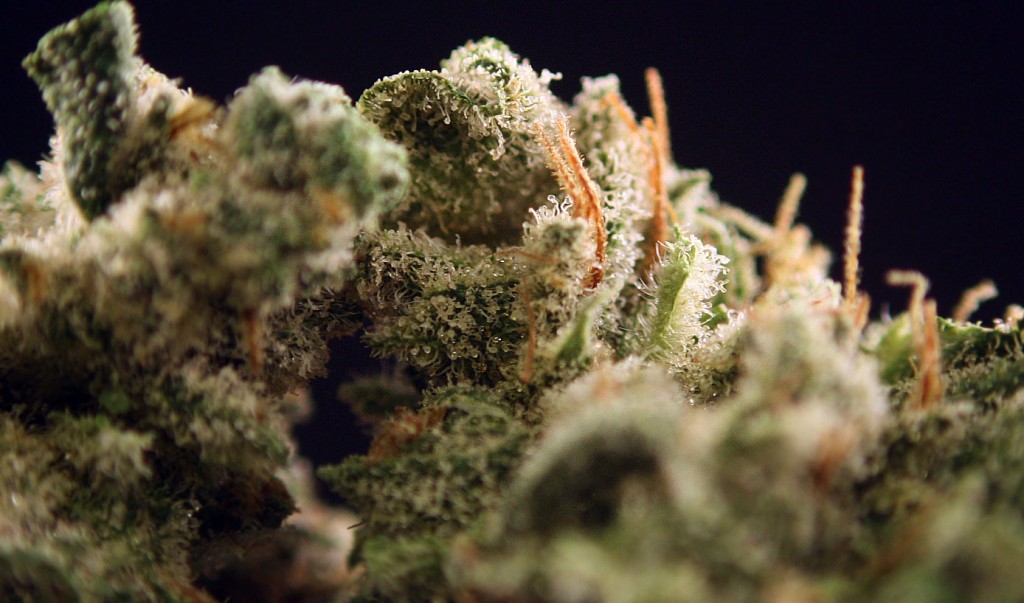 Appearance and Feels: The Blackberry Pie looks damn fine, with a lovely blanket of trichomes covering a lighter green bud structure. The jar I got has more leaf than calyx it looks like, but was trimmed well. From what I’ve read about this strain, it tends to be more purple in coloration the colder the climate it was raised in.

These buds don’t really have any purple, so I’m assuming it was kept nice and warm through these hot summer months. There’s really not that many pistils either, which gives it a more planty green look. It’s pretty for sure. Prickly and stiff.

Dry, but not in that shitty dry way where the bud just goes up in smoke or crumbles off the stem. It’s hard to explain, but if you get some and touch it, you’ll be like damn, Mat was right.

Smell: Mmmm, spicy berry yum yum. That’s what I get when I open the jar. So much more pronounced when you break these buds open is the blackberry sweetness you would expect from BB Pie. I’m really digging the spicy blackberry combo. It’s a great scent that makes my aroma receptors light up like the fourth of July.

Flavor: The taste is not as pronounced as the smell, other than that good skunky dank bud smell all good weed generally has. There’s a little spice to it. Actually more spice than berry in the flavor category.

Perhaps it’s the high leaf to calyx ratio, or perhaps that’s just how weed is sometimes. Just because it looks like the baddest ass shit you’ve ever seen, doesn’t necessarily mean it will taste accordingly. This wasn’t bad or anything, it just didn’t have the taste I was expecting.

High: Bong rips are heavy as fuck. Definitely some soothing, calming, “make-the-pain-go-away-on-a-rainy-day” weed. The high is better than it tastes for sure, but this one definitely packs a punch for being under 20%.

Overall: The Blackberry Pie by Forbidden Farms is some damn fine stuff stoners like. It’s got a decent taste, looks great, and gives you a fantastic buzz. Being just under 20% I would definitely recommend this strain for both new and advanced stoners alike. Just remember your limits if you are just starting out.

Most of these strains I review are more than capable of planting one’s dick firmly in the dirt. But if you know what you’re doing, then take a few hits from the bong to the head, pass the dutchie to the left hand side, and enjoy the high.