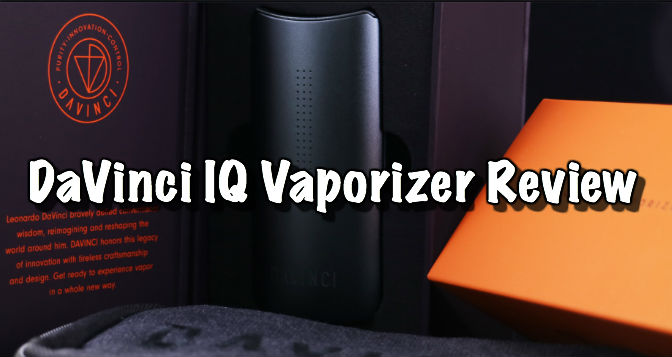 DaVinci IQ vaporizer review by Mat Lee
Recently the nice humans over at DavinciVaporizer.com sent me over their new DaVinci IQ vaporizer for flowers. DaVinci’s last portable dry herb vaporizer was the Ascent. It came out a few years ago. Anyhow after putting the new Davinci vaporizer through it’s paces and using it for a week—here’s my personal thoughts and experience with it.

When the box first arrived I was wondering what exactly it was they had sent me that could possibly be this large. Most of the vapes I review come in boxes not a whole lot larger than the vaporizer itself. This was a fun and pleasant surprise. As you can see from the pictures, they don’t mess around when it comes to wooing us reviewers. I don’t think the DaVinci IQ vaporizer comes in such a large extravagant box if you just order one off the site. I definitely appreciate a company that goes above and beyond, especially if you’ve ever reviewed anything yourself, you’ll know how thankless the job can be.

When I opened up the DaVinci IQ vaporizer box, the presentation was definitely on point. But this isn’t a review about a box, it’s a cannabis flower vape review. It’s a Davinci IQ vaporizer review. The vape itself has a nice form factor, getting away from the pen shape and going with a slightly rounded rectangle shape. It feels great in the hand, and at right around 5 ounces, it’s not super heavy.

I’m always torn when a company chooses to go with the 18650 setup. On one hand, these devices have a much faster heat up time. On the other hand, they buzz. Those of you in the mod world are probably a lot more comfortable around batteries that buzz hanging out in your pockets than the rest of us. I’ve never had an issue with one, it’s just a user preference I think. Either way, it is nice having the option to keep a couple of extra charged up battery cells around if you are going to be away from any electrical outlets.

Speaking of heat up time, the DaVinci IQ vaporizer gets up to 230 F in about 16 seconds. It will also take about 3 hours to get your battery fully charged up, which, depending on how you use it, could last you all day. But if you find that you keep running out of juice, it’s easy to get a second battery cell and keep it charged and in your bag next to your wax vape pen. 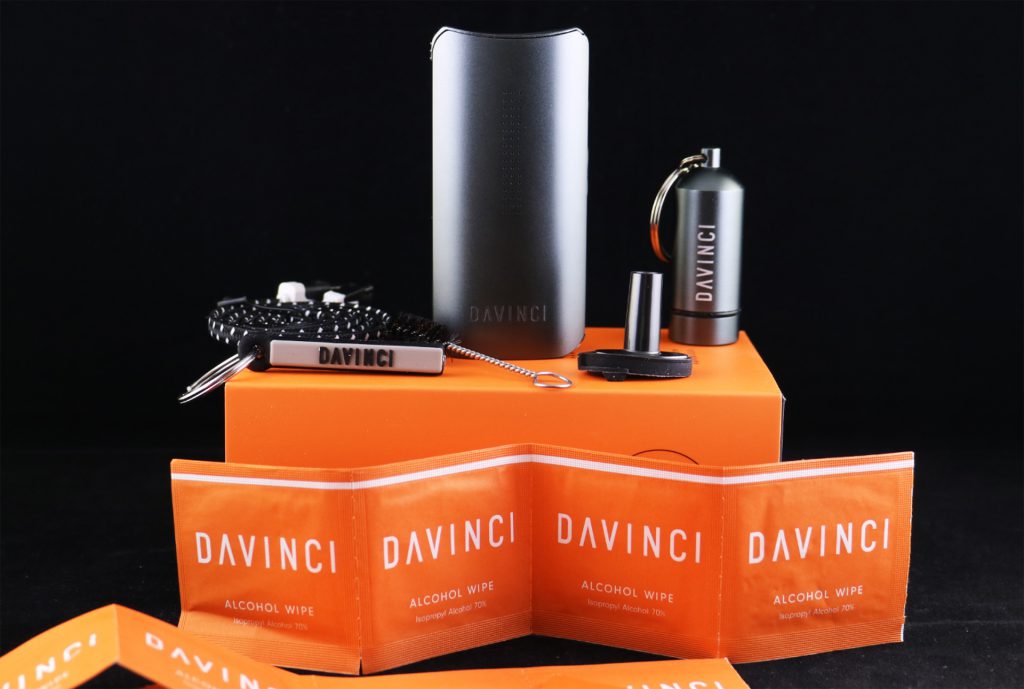 The price point is in the middle of where the Firefly 2 was on the high end and the Vapium Summit+ on the more modest end. At $274.99, the DaVinci IQ vaporizer comes with a USB charging cable, alcohol wipes, cleaning brush, keychain tool, 10mm adapter, and a cool little carry can. For an extra ten spot you can get your DaVinci IQ vaporizer custom engraved. That’s a lot of dope stuff for a pretty good price.

I appreciate the design of the DaVinci IQ portable vaporizer. As I said earlier, it feels really nice in the hand, but more than that, it has a nice draw to it. I also like the size of the bowl. You can pack it once and go for quite a while, depending on how many people it’s getting passed around to, before you have to refill it. I’m not super sold on the flavor chamber, but perhaps I don’t fully understand what it’s for. It seems like they want you to add some sort of herb or spice to it, that would add some extra flavor to your vape hits. But then it also sounds like they want you to add some cannabis in there for extra storage, and to get nice and full of resin in the vape trail.

The thing is, I feel like if you leave some herb in there, and do a bunch of vaping through it, that herb is going to smell like poo. If you’ve ever smelled the inside of your vape after a nice sesh, it doesn’t smell good. While I like the idea of having some weed in the chamber like back in the day, I don’t think I’m a huge fan of letting it sit and marinate in a bunch of vaped weed vapor. Different strokes for different folks I suppose. If they could make the flavor chamber the thing you load when you are vaping the cannabis, that would be cool. It would be way more helpful to have a few of those chambers pre loaded so that you can pop them in and out as you use them. But as far as adding some extra flavor to what I’m smoking, I’m not that into it.

All of the internals are made from 100% zirconium ceramic. They say it acts like glass in giving you great tasting hits, but it’s much, much stronger. All of the parts and accessories for the IQ are reasonably priced, so if you need something extra or a replacement, you aren’t going to break the bank. The DaVinci IQ vaporizer also has a 10 year warranty, and a super helpful support section on their website.

The DaVinci IQ also pairs to your Android or Apple smartphone, unlocking all sorts of cool customizable features and options. It also tracks some usage which is cool, if you are a data geek like I am. It’s neat to see how much you use the thing. When I tried to setup my IQ with my Google Pixel Xl, it worked great. I did notice some app crashes when trying to change the smart paths via the app. I’m not sure if it was crashing because I was being stupid in my settings or if the app is just buggy. As of the writing of this review, the rating on the Play Store wasn’t very high, at 1.9 stars with 145 ratings. Probably something they’ll want to work on. Although in my experience, most of these vape apps don’t work all that great. They also don’t seem to get updated very often.

The app aside, I think the DaVinci IQ vaporizer is a great flower vape for the price point. It works extremely well, has a nice deep weed dish, and the hits taste great. I’m also a huge fan of the optional mouthpiece that comes with it. Giving the IQ the ability to hook up to a water rig. This is assuming you have a joint that will connect to a rig. I was lucky enough to still have one from the Dipstick Vapes Dipper review I did awhile back, so it worked out well. All in all, the DaVinci IQ vaporizer is definitely stuff stoners like.