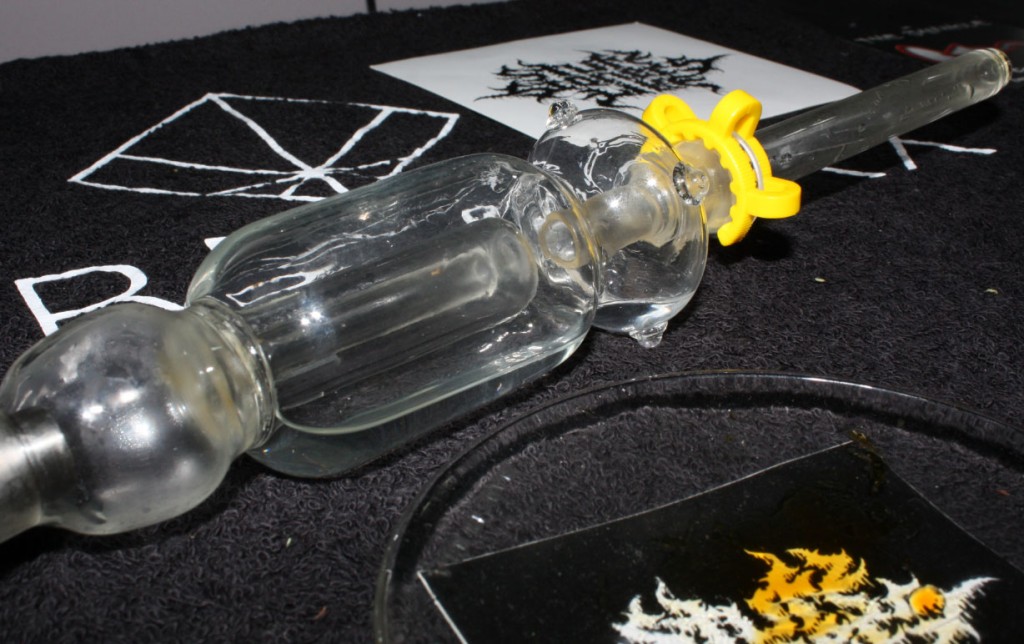 Being a site dedicated to all sorts of awesome stuff stoners like, I feel like whenever I come across a cool new vape pen, or dab rig or some cool way to smoke weed or dabs, I should share it with you. So, without further ado, I am pleased to give you my review of the Honey Straw. This thing is basically a Nectar Collector copy.

I got mine at Growers Outlet, but I honestly haven’t seen these in many shops yet. Everyone I show it to has the same first impression I had. What the FUCK is that thing, and can I please take a rip off it? The first time I ever used one was at Neon City a couple of months ago in Montana. Our camp neighbors were using this weird looking glass thing to take dabs, so being curious I put some dabs in my pocket and went over to say high.

From that point on, I was in love with the Honey Straw, the world’s first vertical vaporizer. At least that’s what their website says. I’ve never seen a vertical handheld vape like that, so I’m inclined to believe them. If you know of another dab rig like this that has been around longer, please let me know in the comments.

The model I have is the small, cost minded one. I’ve heard it also referred to as a honeystraw. Doing some quick research online I found there seems to be two different kinds. The one I have, and the really expensive brand name ones. You can get as ridiculous as you have money to spend on one of these cool dab toys. The most expensive one I found on their site is $16,000. It’s cool and all, but without having a disposable income to dispose of, I’ll stick with the little one I have. You can find them for under a hundred bucks.

The first thing you should know is how to put the thing together. It comes with a titanium nail, the glass body, a glass mouth piece, and a plastic clip that holds the mouthpiece to the body. Definitely do not try and put the clip on the metal to glass connection. As much as it should probably have something there to make sure the nail doesn’t fall out, it’s going to melt, so don’t do it. Put it on top to hold the mouthpiece in place. It’s probably easier just to watch the video I made then to try and type out how the thing goes together.

Now that you’ve seen this thing in action, let me fill in a few more words. After you assemble the rig, you’ll want to make sure you also have a glass dish of some sort. I suppose foil will work in a pinch, but come on now, we don’t want to get too tweaky with it. Actually, don’t use foil. That’s a terrible idea.

Get a piece of glass or something. I’m using either a lab watch glass, or a little glass dabber holder. Anything you can put some oil in, then suck it up with the nectar collector will work just fine. Keep in mind you don’t want to use anything that will cook off something nasty and carcinogenic when you touch the hot metal tip to it. Lab watch glass is probably your best bet. Although some of the nectar collectors copies come with a glass dish, so that’s cool. 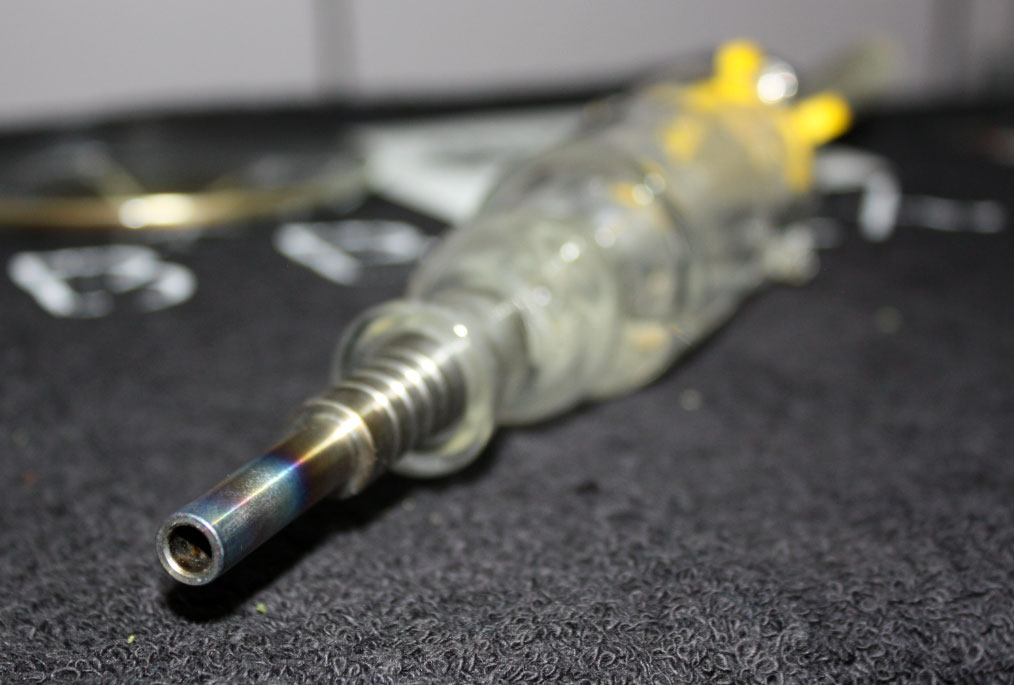 Put your dabs in the dish and start warming up the metal tip. They say warm it up horizontally, but I have always warmed mine up vertically. It probably doesn’t matter, but who knows. You definitely want to make sure there isn’t water where the glass and metal connect. That could be bad news bears. Once the tip is glowing slightly red, you should be good to go. I know people still like to torch the shit out of their nails until they are glowing bright red, but I still feel like that’s way too hot. Start inhaling through the straw before you actually touch it to the oil. It will work much better this way. I like to put a puddle in the dish then make swipes through it. Others like to draw designs or just straight up make lines of oil. It’s all up to you.

I saw a video online of a guy that was using one of the small straight through dry collector pieces called the Honey Badger, and apparently he sucked some oil into his mouth. Just something to keep in mind, you are using a glass straw with a hot tip. If you suck too hard, you might get something sticky icky in your mouth.

I also found a video where they show off using a Dnail with the nectar collector. I definitely need to invest in a Dnail. The more I see them, the more they just make sense. I’m all about that set it and forget it stuff. Especially when it’s stuff stoners like. I would leave that shit plugged in and on all day long. I just can’t seem to justify spending that much right now. But if you want one, check them out here.

If you are in the South Bend area, stop in to Growers Outlet and get one. As I mentioned at the beginning of the article, that’s where I got mine at. This cool little device has become my new favorite dab rig. I still love my QuartzCastle, but the Honey Straw is just fun. That’s right, as if taking dabs wasn’t fun already, they gave it a new spin by giving you a cool handheld bubbling spill resistant rig. The Honey Straw is definitely stuff stoners like.