Mat Lee says the Vapium Summit Vaporizer is “wicked-rugged, feels good in the hand and has a dope, low-key look.” That’s cool and all. But does it actually get the job done?

Mat Lee: I’ve reviewed quite a few portable flower vaporizers in my time working in this awesome industry. Having been spoiled early on during a trip to amsterdam, where my first vaporizer experience ever was at a coffee shop named the Bulldog. There they had these awesome volcano shaped things that were filling up blimp sized bags. I was completely in awe.

Having that standard to live up to, even in something more portable, and the fact that it takes a lot of battery juice to heat up a dish hot enough to get cannabis to vaporize properly, I’ve been pretty unimpressed with the technology. So much in fact that I actually stopped reviewing portable flower vapes. Until now.

Vapium is the company, and the Summit+ is the name of the vaporizer. This thing is wicked rugged, feels good in the hand, and has a dope low key look. But does it actually get the job done? It most certainly does. Check out the video!

I also saved everything I vaped through it to show you how well it actually gets the job done. It’s brown, but not burned, which is exactly what you want when vaporizing cannabis. It’s also mostly decarboxylated, so you can use the post vaped material for edibles if you like. If you want to see the chronological (chronic-logical?) progression of things, start out with the Hot Box Live Sesh first look I did here. Now that I’ve been using it all day every day for over a couple of weeks, here’s my thoughts.

This thing is rugged, and as you can see from the video, it works out in the cold as well. Which if you look on the inside of the box you’ll see that this is one of the selling points. I know this will appeal to a lot of my Northern friends and followers. Some of you even wrote me to ask if I could take it out into the cold and see how well it works. Well your wish is my command. The bowl capacity is also nice for individual use. I found myself getting plenty faded puffing on this thing during and in between rounds of Battlefield 1 on the PS4 without having to constantly repack it. It’s always wise not to pack the material in too tightly, otherwise you won’t be able to get a good draw. Definitely load this thing up with some bomb ass flower, give it a good tapping with the tool provided, and load it up a little more. Remember, these portable vaporizers are more for personal use, rather than sharing with friends, so you’ll start to lose some vaporization efficiency the more you pack it down.

Powering the electronics is a 3300 mAh battery. It gets charged via USB C. This is awesome for two reasons. One, USB C will charge your battery much faster than the previous USB versions. The battery size is also decent for the device, although if you’re like me, you might find yourself running the battery down faster than normal, because using the boost option on the app is key for getting the Summit+ up to that perfect operating temperature. 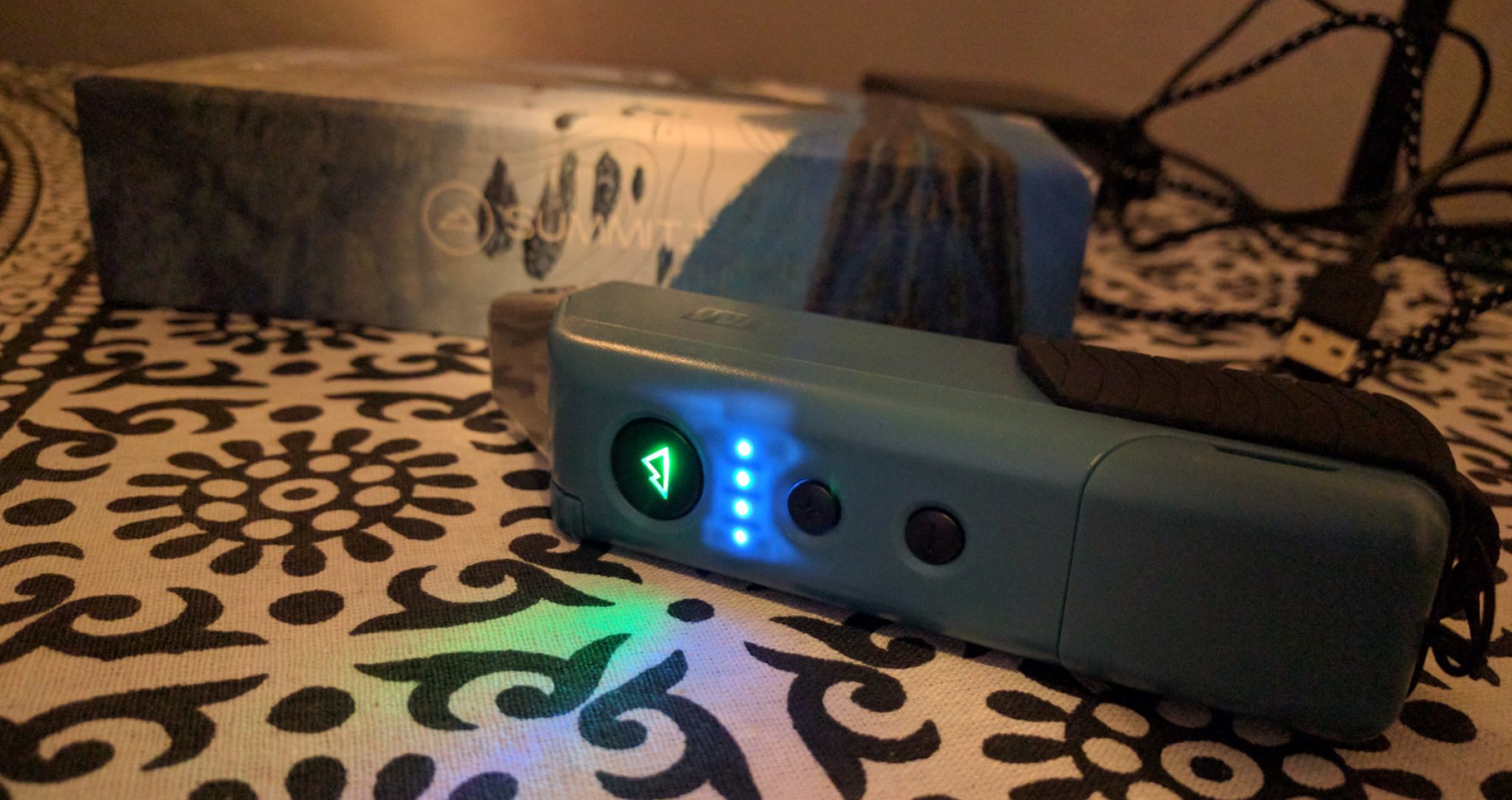 I like how the cover is tethered so you won’t lose it. I also fully appreciate how the stylus poker / tamper tool reminds me of an old school cell phone stylus. Super slick for sure. It also comes with a cool weather proof bag to keep the pipe cleaners, extra flower plates, mouth piece covers, and extract pads.

Now let’s talk about extract pads. Keep in mind, the Summit+ isn’t the only portable flower vape that comes with these dirty little things. As you can probably already tell, I’m not a huge fan of them.

I would like to mention to the makers of these products that they should definitely focus more on creating and dialing in cool features and making the device and any accompanying apps work perfectly, rather than trying to make something that will work with both flower or oil. I promise, once you get oil in this thing, you will never want to use it with flower again, unless you give it an iso bath. It’s going to make a sticky mess. Maybe that’s ok for you, but for me, that’s a huge nightmare and a total turn off. 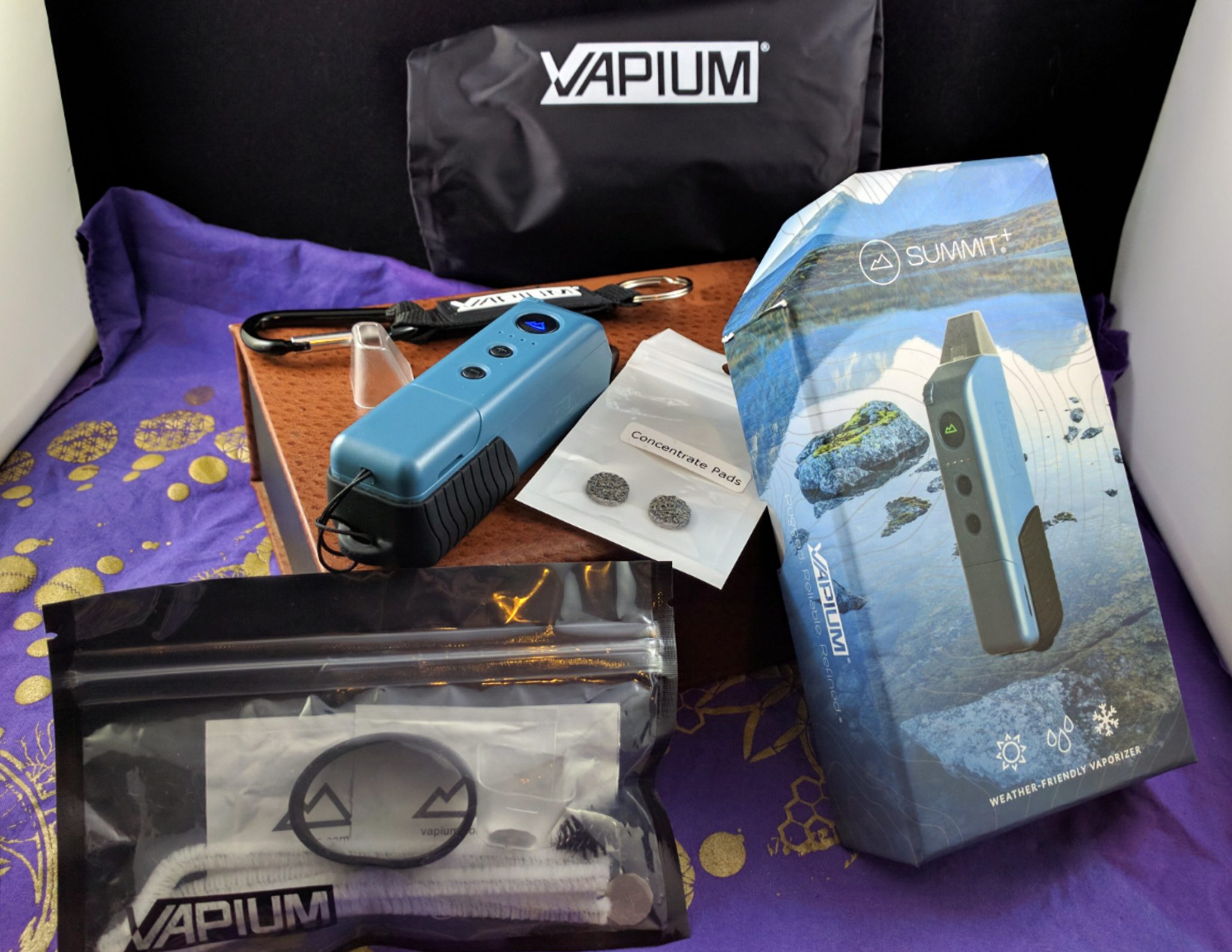 To be perfectly honest, I didn’t even want to try it with oil, but that’s because I’ve worked with oil quite a bit, and I know what it can do to things like this. Not to mention I do the same with my glass collection. Some pieces are for smoking flower, and some are for dabs. Rarely do I use a piece for both. I’m also thinking to myself, my enail sits at 600 degrees F, this thing, even with boost mode activated via the app, only hits about 465 degrees F.

Plus, I don’t think the extract pad is going to keep the oil on there, and eventually it’s going to seep into the heating area and cause problems. If you want to dab oil, get a Vaporous Jpen or a Dabado Bolt or a Vuber or something. But if you want to vape flower, this is definitely one I recommend getting. Of course, since this is a review, I had to try it anyway. If you do the same, make sure you use a very small dab, the more you put on that concentrate pad, the more it’s going to liquify as it heats up and get itself stuck in all sorts of hard to reach places.

It’s also the fact that dabs over time, tend to eat at things like plastics and rubbers, making them need much more routine maintenance and replacing of parts. I know how rough you stoners can be on your smoking devices, so I just want to forewarn you.

So did it work? Yes, it absolutely did. Keep in mind that I only put a small dab on there, and that dab was distillate, which has the least amount of residue left behind due to it being fully winterized. That means the fats and waxes were removed. You will definitely want to make sure you have the app connected if you decide to take dabs out of it. That boost mode will come in handy. I found a few quirks with the Summit+, but most of them involved the app and getting it to connect to the device. Once it was connected, it worked great, but if you let it turn off, or had to close the app while the device was still on, for some reason it won’t reconnect until you turn the Summit+ off, then back on, and also close the app completely. Open the app again once the device turns back on. That’s made it connect for me every time. I was testing this with a Nvidia Shield Tablet K1 and a Nexus 6p. Your mileage may vary.

This is going to sound completely gimmicky, and it absolutely is, but did I mention you can take it in the shower? I know right? Just what we’ve all been waiting for! Finally, a good way to get blazed while bathing or showering. This is no shit too. As soon as I read that this thing was rated IP54, I knew shower vaping was going to take place.

For those of you who don’t know, and I include myself in this before I looked it up, the IP rating, also know as the International Protection Marking, or Ingress Protection rating. Wikipedia told me that this code classifies and rates the degree of protection provided against intrusion (body parts such as hands and fingers), dust, accidental contact, and water by mechanical casings and electrical enclosures. It is published by the International Electrotechnical Commission (IEC). The first number in the code is the solid particle protection number. This is the level of protection that the enclosure provides against access to hazardous parts like electronics and such. The second number is the Liquid Ingress Protection number, which indicates the level of protection that the enclosure provides against harmful ingress of water.

What the hell does that all mean? The Vapium Summit Plus is rated IP54. So if we look at the handy chart on Wikipedia, 5 means the device is dust protected. Meaning that ingress of dust is not completely prevented, but it must not enter in sufficient quantity to interfere with the satisfactory operation of the equipment. The particle scale maxes out at 6. So a 5 out of 6 isn’t bad at all.

The 4 in IP54 means the device should be able to handle splashing of water. The chart on Wiki describes this in the following: Water splashing against the enclosure from any direction shall have no harmful effect, utilizing either: a) an oscillating fixture, or b) A spray nozzle with no shield. Test a) is conducted for 10 minutes. Test b) is conducted (without shield) for 5 minutes minimum.

That’s pretty much the definition of a shower, although it doesn’t say anything about shampoo or conditioner, so I would still be careful when vaping in the shower. All kidding aside, it’s cool the device was engineered to such high specs. That means should you accidentally get it wet, or want to vape in the rain, or even the shower, you’re able to do so.

As far as portable flower vapes go, this is definitely one I will start recommending to my friends. Hell, I’m even going to start using it to better describe the taste of flower I review. After I get it cleaned out of course. I’m also a huge fan of how the Chewy Grinder dispensing area fits perfectly inside of the Summit+. It’s like they knew you would eventually want to vape on the go, and with these two devices, it’s so damn easy. Easy and awesome. That’s stuff stoners like.