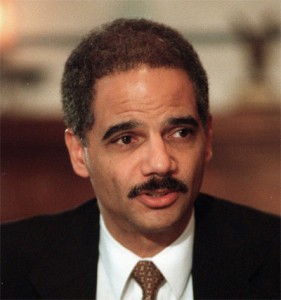 US Attorney General, Eric Holder, the nation’s top law-enforcement official, toured an Oakland youth center, yesterday in an effort to put an end to gang-related violence. And, to also chat about weed. With Mayor Ron Dellums and Police Chief Anthony Batts, by his side Holder told the crowd it was a top priority of the Obama administration to bring about initiatives to combat gang-related violence.

One of those communities Holder and the Obama administration have been trying to foster relationships with is the medical marijuana community. Last year Holder asked the DEA both verbally and in print, to stop terrorizing law-abiding medical marijuana patients and caregivers. And, during this visit he reiterated that he and the Obama administration would leave medical marijuana suppliers alone if they were complying with state law. He also mentioned the focus instead should be on the cartels that bring marijuana into the country. He probably just didn’t realize he was smack dab in the heart of Oaksterdam, where almost none of the area’s weed is imported…it’s grown locally, and highly taxed.

About the Tax and Regulate initiative, on the upcoming November ballot, that looks to legalize weed for recreational use in California for adults 21 and over, Holder said, “I’m not sure that legalization, quite frankly, is necessarily the way to go.”

Whether or not if it’s the way to go, taxing and regulating weed might be one way to offset the costs of tours such as these or the Obama administration’s proposed $12 million in funding for gang and youth violence prevention for the next fiscal year.