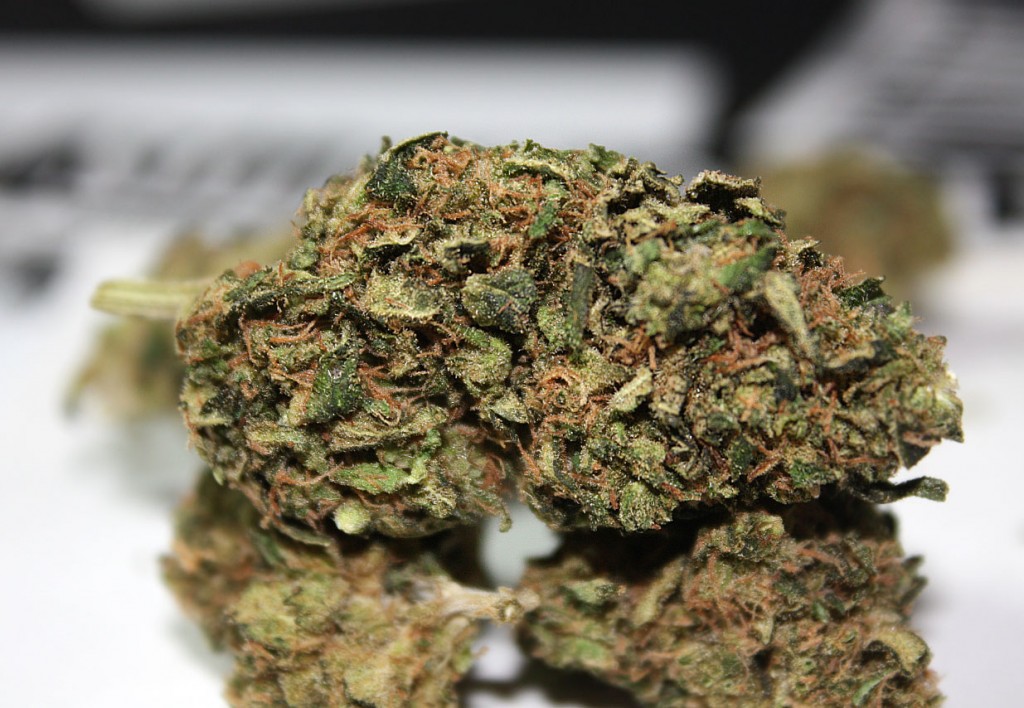 Review by: Mat Lee
Score: 8/10
This is part four of my four part weed review series on buds that I’m smoking. I had a chance to get 4 strains analyzed by the Werc Shop analytical lab in Bellevue Washington to see what kind of terpenes and THC / CBD content they have. Click here for a PDF of all four strains lab results. The four strains tested were the legendary Elephant Strain, Sin City Aliens on Moonshine, Red Dragon, and Querkle. This is my review on the Aliens on Moonshine strain.
Sativa vs Indica: 20% Sativa and 80% Indica
Content: CBDA 10.09% | CBGA .18% | CBC .14% | THC 2.36% | THCA 2.74%
This is quite interesting to me considering the nice body high and buzz I get from this. I never would have guessed that this is a high CBD strain (Aliens on Moonshine strain CBD levels are higher than most strains). Well not high, but higher than anything I usually smoke. Which might have something to do with it.

Genetics: Sin City Aliens on Moonshine genetics are a cross of Cali Connection’s potent and pungent, Sour Alien and the White Moonshine strain—a, classic and super-heavy resin producer. Apparently the Aliens on Moonshine flowering time is approximately 8-9 weeks if you’re considering growing ’em.
Appearance: Gorgeous medium size, moderately dense buds that has some decent frost, but not as frosty or as dense as the Red Dragon. But close, at least in density. Much more noticeable under the magnifying glass. Without it all you see is the dark green buds with the frosty orange hair here and there.

Smell: First I’ll describe what I smell from the weed itself, then I’ll list the different terpenes the lab test found. This Aliens on Moonshine strain has one of the most pungent mango fruity smells I’ve had the pleasure of smelling in a long time. The last strain I can remember having such a distinctly vivid mango type smell like this, was back in Montana called AotA. I thought it was cool because those are the same letters for our Android show, Attack of the Androids. Although I believe the bud was called All of the Above. But it had pretty much the same smell.

Terpene information is abundant online. My favorite site? Icmag—especially this very informational post. For the sake of this review I only commented on the terpenes showing up over 1 mg per g. All Terpenes are listed as mg / g.:

Limonene – 2.55
Found in high amounts in cannabis resin as well as tropical fruit rinds and many other fruits and flowers. Everyone is familiar with the odor of citrus resins. They explode into the air when a fruit is peeled. The exact odor is determined by the structure of the terpene. Plants use Limonene to repulse predators. For instance, flies have a group of receptors similar in function to the taste buds on our tongues. One of them detects noxious chemicals, and responds to Limonene as if it were toxic. This is hard wired into the flies brain. Limonene is a potent antibacterial, antifungal and anticancer agent. Limonene has been used clinically to dissolve gallstones, improve mood and relieve heartburn and gastrointestinal reflux.

Limonene has been shown to destroy breast-cancer cells in lab experiments, and its powerful antimicrobial action can kill pathogenic bacteria. Limonene sprays are also used to treat depression. Limonene is the second, third or fourth most prevalent terpene in almost all cannabis resins and it is a precursor to the synthesis of other cannabinoids. Limonene is highly absorbed by inhalation and quickly appears in the bloodstream. Since Limonene is known to affect the permeability of the cell membranes, it allows more THC to reach brain cells and increases the absorption of other terpenes. Limonene’s design facilitates a direct response by quickly permeating the blood-brain barrier. The result is increased systolic blood pressure. One test, reported subjective alertness and restlessness.

Linalool – 1.95
Has a floral scent reminiscent of spring flowers such as lily of the valley, but with spicy overtones. It is a terpenoid prominent in lavender. It is refined from lavender, neroli, and other essential oils. Humans can detect its odor at rates as low as one part per million in the air.

Linalool is being tested now for treatment of several types of cancer. It is also a component of several sedating essential oils including lavender oil which is believed to possess antianxiety and sedative properties. In tests on humans who inhaled it, it caused severe sedation.

In tests on lab rats it reduced their activity by almost 75%. In addition to being a compound that counters anxiety and mediates stress, linalool is a strong anticonvulsant, and it also amplifies serotonin-receptor transmission, conferring an antidepressant effect. Applied topically, linalool can heal acne and skin burns without scarring. Strains that are high in linalool may be particularly beneficial for patients who experience insomnia due to their sedating effects.

Myrcene – 15.52
Mycrene has an odor that is variously described as an aroma of hops, clove like, earthy, green-vegetative, citrus, fruity with tropical, mango and minty nuances. The various odors are the result of slight differences in the overall makeup. All of these flavors and odors are commonly used to describe Cannabis.

β-Myrcene is the most prevalent terpene found in most varieties of marijuana but it is not found in hemp. It is present in significant concentrations in cannabis resin itself. It is also found in mango, hops, lemon grass, East Indian bay tree, and verbena. Because of its appealing fragrance, myrcene is used extensively in the perfume industry. Myrcene has antimicrobial, antiseptic, analgesic, antioxidant, anticarcinogen (It blocks the actions of cytochrome, aflatoxin B and other pro-mutagens that are implicated in carcinogenesis.) and anti-inflammatory properties. It has shown some promise when used as an antidepressant, or as an additive to other antidepressant drugs and is also used in massage therapy as a muscle relaxer.

Myrcene is a synergist of THC: A combination of the two molecules creates a stronger experience than THC alone. Myrcene affects the permeability of the cell membranes, thus it allows more THC to reach brain cells and increase the absorption of other terpenes. This terpene contributes strongly to the infamous “couch-lock” experience.

Has a medium strength, herbal aroma that has been described as fresh, woody, sweet and piney with a hint of citrus. Its flavor is a sweet, woody, terpy, lemon and lime-like with a slight herbal and floral nuance. It is used as a flavor and fragrance agent. Its use in fragrances in the USA alone exceeds 50,000 lb/yr. Terpinolene is used in soap, detergent, creams, lotions, and perfume.

α-Pinene – 3.04
The familiar odor associated with pine trees and their resins. It is the major component in turpentine and is found in many other plant essential oils in noticeable amounts including rosemary, sage, eucalyptus and many others. Pinene is used medically as an expectorant, and topical antiseptic. It easily crosses the blood-brain barrier where it acts as a acetylcholinesterase inhibitor; that is, it inhibits activity of a chemical that destroys an information transfer molecule. This results in better memory.

Pinene also promotes alertness and memory retention. Largely due to the presence of pinene, rosemary and sage are both considered “memory plants.” Concoctions made from their leaves have been used for thousands of years in traditional medicine to retain and restore memory. It is also a bronchodilator. A pharmacokinetics study of inhaled α-pinene in humans demonstrated 60% uptake, and a relative bronchodilation effect. The smoke seems to expand in your lungs and the high comes on very quickly since a high percentage of the substance will pass into the bloodstream and brain. It also increases focus, self satisfaction and energy, which generally counteracts with the presence of Terpineol. α-Pinene has inhibited acetylcholinesterase suggesting utility in the clinical treatment of Alzheimer’s disease.

β-Pinene – 1.15
This terpene has a woody-green pine-like smell. β-Pinene is one of the most abundant compounds released by forest trees. It is one of the two isomers of pinene (The other being α-Pinene) and it shares similar properties.

Flavor: A beautifully robust mouth full of fruity pungent mango and subtle berry sweet piney goodness. My girlfriend said it was zesty. I like that. Zesty. It’s basically a mouth full of tasty zesty awesome.
High: Pretty mellow, but has a nice body high that sorta creeps up on you. I was also surprised to feel a nice gentle head change. My girlfriend enjoyed this one since it was a little lighter on the THC content. She made it through a whole joint! I also enjoyed it, but mostly because of how amazing it tastes. Like I said, the buzz was nice and mellow too, which I also enjoy.

Overall: A much needed addition to any stoners stash box. I might even consider an Aliens on Moonshine grow someday. Because it’s always good to have a CBD strain or two on standby, especially if you get the twitchys ever, or just need something to soothe the savage beast within. Remember kids, just because it doesn’t get you high doesn’t mean it’s bad weed. It just has other properties, although honestly this one also has a nice head change with it. I’m giving this one an 8 because I’m a fan of CBD strains, and the taste. That taste though… Proper smoke.

One Response to “Aliens on Moonshine Strain Review”